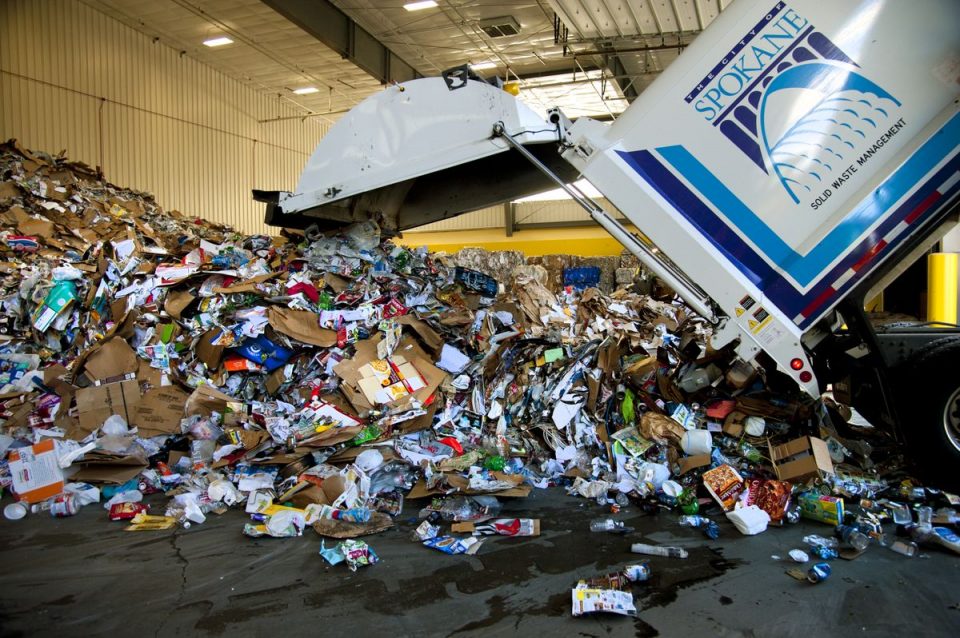 The city definitely loses money on every glass bottle a Spokane resident tosses in a blue recycling cart, but the environmental benefit is less certain.

As it continues to hemorrhage money on recycling, the city is contemplating a $2 monthly surcharge to residential customers or reducing blue-cart pickup to an every-other-week schedule.

It’s the latest evolution in a yearslong problem. The preference of Mayor Nadine Woodward’s administration is the latter, but the City Council has yet to formally weigh in.

Depending on the material, recycling in Spokane may be largely symbolic and functionally useless, as the city is unaware exactly where the materials it sells into the open market end up.

“On one hand we’re encouraging people to recycle, (and) we’re going to charge them more or a fee to do it, but yet most of it’s going to go in the garbage,” Councilwoman Karen Stratton said of the potential $2 surcharge.

Spokane is one of many cities to struggle with recycling since China adopted its National Sword Policy in 2018, tightly restricting the materials the country would import. The policy outright banned the import of many scrap materials and established a strict contamination rate on plastics.

In short, the policy upended the recycling systems of the United States and countries around the world, which heavily relied on processors in China as a customer of their recyclable materials.

For the city of Spokane, with its roughly 70,000 residential solid waste customers, the market changes mean it costs more money to recycle.

In July, for example, the city still earned money by selling recyclables like aluminum cans, but the proceeds were barely enough to cover the hit it took on items like mixed plastics and mixed glass. After factoring the amount it was charged by Waste Management to sort and process the recycling, the city lost about $128,000 on recyclables that month.

For all that cost, it’s not certain what the environmental gain of recycling in Spokane is.

The city is not necessarily told by Waste Management where the materials wind up, so it’s unclear what percentage is actually being repurposed.

There’s no simple solution to the problem, according to Scott Simmons, the interim city administrator and Department of Public Works director. Advising residents to toss their mixed glass and mixed plastics into their brown solid waste carts might save the city money upfront. But it would also mean those materials end up at the city’s Waste to Energy facility, which burns solid waste to generate electricity, and potentially damage its equipment or let off hazardous emissions.

Meanwhile, the city estimates that about 12% of what’s brought to Waste Management’s Spokane Materials and Recycling Technology (SMaRT) facility is actually just trash.

City spokeswoman Marlene Feist told The Spokesman-Review on Wednesday that the city has focused efforts on reducing the amount of garbage tossed into residential recycling bins, as well as finding better ways to separate what’s actually valuable – like newsprint, cardboard and aluminum cans – from what isn’t.

Until it can do that, the city is considering ways to cut costs. It discussed potential measures at a meeting of the City Council’s Public Infrastructure and Environmental Sustainability Committee this week.

Picking up recycling only every other week would require that the city provide residents with larger 96-gallon carts, but it would save money on fuel, wear-and-tear on trucks, and personnel.

Alternatively, the city could consider charging residential solid waste customers a $2 monthly surcharge while maintaining the current weekly pickup schedule. Recycling is included in the base rate a residential customer pays, although only about 70% of residents actually place their blue recycling bins on the curb every week.

The $2 surcharge could be lowered if commodity prices improve. Tacoma, Vancouver, and Walla Walla have all adopted recycling surcharges.

Councilman Michael Cathcart bristled at the idea of a surcharge.

“We shouldn’t be adding additional fees for a program that many folks would just choose not to participate in,” Cathcart said.

The city has not done a good job of articulating the cost of recycling, Simmons argued. The city likely chose to bundle recycling and solid waste removal service into one package because it didn’t want to create the perception that recycling costs money – but it does, he said.

“It’s been perceived as a freebie, if you will, and it’s not free,” Simmons said.

Volatility means up and down

View: The Defence Procurement Manual 2020 is a step towards attaining ‘AatmaNirbhar Bharat’

Surging Investments Towards Innovation to Spur the Growth of the Bill of Material Management Software Market 2016 – 2026 –...