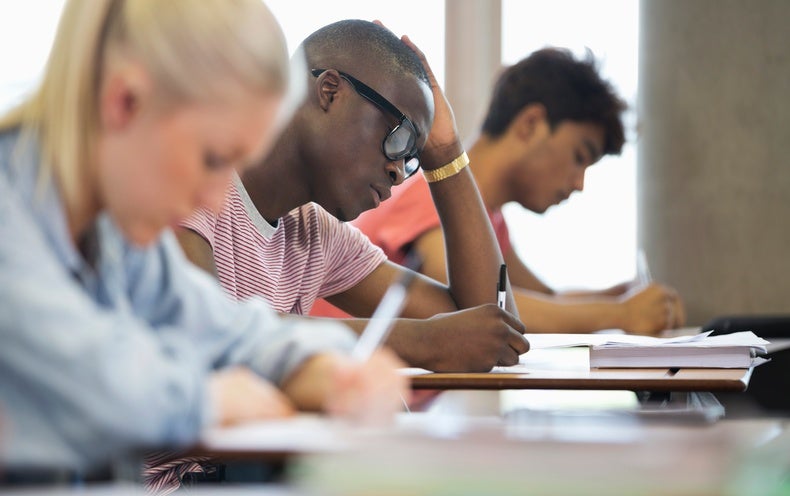 As both a parent and a college professor, I have witnessed the destructive effects of test anxiety. Students with it can rattle off the material and explain complex content in a relaxed setting but crumble during an examination. When it matters the most, students with test anxiety can convey the least.

Relief from the condition is often found in a combination of psychotherapy and antianxiety medication, though some students turn to neuroenhancing drugs (for example, prescription stimulants). With any medication, whether used on- or off-label, there is a concern for safety, particularly when it targets the brain, the body’s most intricate and important organ. A new pilot study by Michael Schaefer of Medical School Berlin and his colleagues suggests there may be an alternative to these drugs for students: an open-label placebo.

Placebos have long been known to effectively alleviate symptoms for a variety of conditions and ailments, from pain and nausea to sleep disorders and even irritable bowel syndrome. Traditionally, administration of a placebo treatment requires some deception, in that people believe they are receiving an active, effective treatment, but in reality, they are taking a sugar pill or engaging in an activity that has no medical merit. An open-label placebo is different: people are informed from the start that they are receiving a placebo that contains no medication or proved intervention. And yet Schaefer’s findings indicate that people may still benefit from it.

Schaefer and his colleagues conducted a randomized controlled study with 58 university students to assess whether an open-label placebo might reduce test anxiety and, at the same time, improve subjective measures of self-management and quality of life. Participants were recruited through campus flyers and social media platforms, with the stipulation that they had an upcoming final exam. Students did not need to have diagnosed anxiety to enroll.

All participants were given the same basic information about placebos: They were told that placebos are inactive substances that contain no medication but that can nonetheless have powerful effects, because the body may have an automatic, conditioned response to them. Participants were informed that if they were assigned to the placebo group, they would need to take their pills faithfully and that a positive attitude may boost placebo effects.

Before knowing whether or not they would receive the placebo, participants completed baseline assessments for test anxiety, self-management skills and subjective quality of life. The test-anxiety measure assessed individuals’ level of worry, lack of confidence, emotionality and interference. Self-management skills included coping, introspection, hope, self-verbalization, self-efficacy, change motivation and perceived social support, while the quality-of-life measure assessed perceptions of personal health, pain, psychological distress and well-being, as well as physical and social activity.

Once these baseline measures were complete, half of the participants were then randomly selected to receive no treatment, and the other half received placebo pills that were to be taken twice a day—once in the morning and once in the evening—for two weeks. The bottle containing the pills was clearly labeled “Placebo Pills,” and participants were given specific instructions to swallow rather than chew them. Importantly, the time and quality of interaction with study personnel was consistent across the control and placebo groups for the duration of the study.

After two weeks, all participants returned to the lab to complete post-treatment assessments of test anxiety, self-management skills and quality of life. All measures were completed before participants took their final exams.

Scores on the baseline measures did not vary between the placebo and control groups. After the two-week intervention, however, the placebo group showed a significant reduction in test anxiety, along with significant improvement in self-management skills. Those in the control group had no reliable change in any measure. Thus, the placebo group showed a genuine improvement—at least on self-report measures—even though participants knew they were not taking a real medication.

Why did the placebo work? At this point, scientists are not entirely sure. One possibility is a conditioned response: participants who have taken medication (for any reason) in the past and experienced a benefit may associate pills with a relief in symptoms and thus show some benefit from taking any pill, even a sugar pill. Alternatively, embodied cognition may play a role here, because human mental processes can be altered by the body’s interaction with its environment. Taking the pills each day may have encouraged participants to think about test anxiety and may have also provided a sense that they were doing something to address it. Regardless of why or how the open-label placebo was effective, the benefits observed here mirror those found in other randomized controlled trials with open-label placebos: similar results have been found for chronic low back pain, migraine-induced headaches, irritable bowel syndrome and allergic rhinitis.

Before committing to an open-label placebo treatment plan for test anxiety, however, savvy consumers should consider some of the limitations of the extant findings, including the small sample size and limited duration of this study. Larger-scale investigations that target individuals with diagnosed anxiety and that monitor the effects of treatment over time are needed. In addition, because this study did not compare the performance of a placebo with that of actual medication, it is not clear whether open-label placebos shows similar benefits to drugs prescribed for anxiety. Finally, although participants taking the placebos did show improvement on a number of self-report measures, they demonstrated no benefit over the control group with respect to scores on their final exams. They may have felt better about taking their exams, but those feelings did not translate into improved test scores for the single assessment included here.

Despite these limitations, the present findings are intriguing and suggest a potential low-cost, low-risk way for alleviating an all-too-common problem among students. If the open-label placebo benefits are replicated and persist over time, then at the very least, students will worry less and feel more confident, supported and hopeful as they tackle academic challenges.

“More air-freight Chilean cherries are to arrive in China”