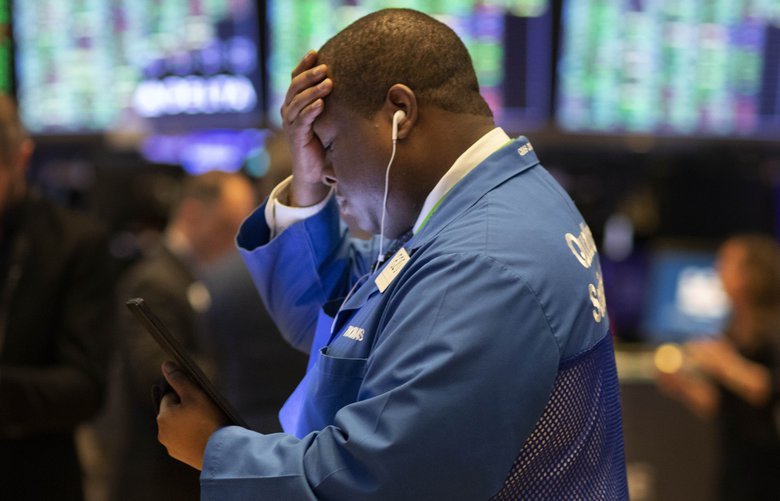 Markets last week took their worst plunge since the crash of 1987, wiping out roughly two years of gains, before closing slightly up on Friday.

The stock market is just one indicator of companies’ health and prospects, and too often investors focus only on the next quarter’s results. Still, as the Great Recession showed, a market downturn can begin to create momentum of its own. Companies knocked down in the market can have a harder time getting back on their feet, affecting not only investors but workers.

“Any time you have a lot of uncertainty — and this scenario defines uncertainty — both about the virus and about the nature of the response, you’re going to see high volatility,” said Jonathan Karpoff, a finance professor at the University of Washington’s Foster School of Business.

On social media, some Seattleites wrote with dread about checking their 401(k) accounts, while others wondered whether the downward market pressure would squeeze their job off the payroll at one of the area’s big companies.

Here’s a look at how nine of Seattle’s largest publicly traded employers have fared since the start of the year.

Alaska’s shares lost nearly half their value since late February, when they traded for more than $65, falling to $35 before rebounding a bit to $37.95 on Friday. Airlines have been hit hard by a decline in travel due to the coronavirus, including flight stoppages between the U.S., China and Europe —and soon, potentially, domestic coronavirus hot spots (Washington included). Alaska, which employs roughly 10,000 people in Washington, said Tuesday it was considering hiring freezes and looking to cut some routes.

As late as last week, analysts predicted Amazon would be insulated both from the public health crisis and the market crisis. It offers two services — delivery and cloud computing — that are in high demand as Americans limit social contact by ordering necessities and conducting meetings online. Yet despite surging online orders, Amazon’s shares mirrored overall declines in the tech sector to close last week at $1,785. The company, which already employs more than 50,000 people in the Seattle area, is in the midst of a major hiring push. As of last week, real estate brokers said they were still helping new Amazon hires relocate here.

Crashes, both literal — of Boeing 737 MAX jets with faulty flight control systems — and last week’s coronavirus-triggered market crash have done serious damage to the aerospace company’s valuation. As the year opened, Boeing shares were trading at $333.32. Since then, they’ve lost 48.9% of their value, including a 29% fall in the past week, closing Friday at $170.20. To put it in perspective: Boeing’s new $95.85 billion market valuation means the country’s largest aerospace manufacturer — with 161,000 employees nationwide, including 71,000 in Washington — is now worth less than wholesale grocer Costco.

Lines out the door. Empty shelves. Sold out toilet paper. Americans’ inclination to stockpile essentials has provided Costco with some degree of protection from the rest of the market’s cliff dive, analysts said. At week’s end, Costco shares closed at $302.27, just 3% down from the start of the month — and ahead of where it started the year. Costco CFO Richard Galanti told analysts last week that February sales were up by three percentage points as the wholesaler struggled to keep high-demand items — like hand sanitizer and disinfecting wipes — on its shelves, Bloomberg reported. But it’s not just hygiene products that are selling well: Even items unrelated to the pandemic, like patio furniture, have seen an uptick in sales, Galanti said.

After Microsoft announced in late February that due to coronavirus-slowed sales of Windows licenses it no longer expected to hit some revenue targets, shares fell from nearly $190 to close by week’s end at $158.83, just under where it opened the year. On the cloud computing front, Microsoft relies heavily on signing complex contracts with government agencies and corporations — for instance, JEDI, a $10 billion contract with the Pentagon. The coronavirus pandemic could complicate future cloud computing sales, said D. A. Davidson analyst Tom Forte. As of Friday, the Redmond-based computing giant is hanging on to its trillion-dollar market capitalization, though Forte said he expects in coming weeks Microsoft will dip under that benchmark.

Shoppers know Nordy’s for stellar in-person service — so just how viable is the luxury retailer, which spent more than $500 million to open a 320,000-square-foot flagship store in New York last year, in this season of social distancing? Nordstrom’s strong e-commerce division, which has been a bright spot for the company amid falling overall sales, means the company is better situated than most department stores, said Neil Saunders, managing director of GlobalData Retail — but that may not be saying much as pandemic-panicked consumers rein in discretionary spending. Friday, Nordstrom shares closed at $21.59, eliminating the share price boost that came on the heels of the flagship opening.

Starbucks was the first among large Seattle-area companies to see fallout from the coronavirus: The coffee giant closed half its China stores in late January due to the outbreak. Most have since reopened, but the company still anticipates sales in China this quarter to fall by around 50%, as much as $430 million, from last year. Even as the transmission of the disease slows in China, Starbucks’ 35,000 worldwide stores are likely to see declining sales as caffeine-drinkers forego the “third place” for lattes brewed at home. Shares have fallen from a six-month high of $93.75 in January to $69.92, a 25% drop.

Coronavirus has not changed the final question mark hanging over T-Mobile: Whether its $26.5 billion takeover of Sprint will be approved by the California Public Utilities Commission. Last week, the answer seemed to be yes. An administrative law judge with the commission recommended the merger go ahead, briefly buoying shares of both companies. The telecom’s shares overall were down 8% from the start of the week, to close at $85.39 — still 8.7% above where it opened the year.

More on the outbreak of new coronavirus

How is this outbreak affecting you, if at all?

Are you changing your routine or going about your business as usual? Have you canceled or postponed any plans? What kinds of discussions are you having with family members and friends? Are you a healthcare worker who’s on the front lines of the response? Whoever you are, we want to hear from you so our news coverage is as complete, accurate and useful as possible. If you’re using a mobile device and can’t see the form on this page, click here.