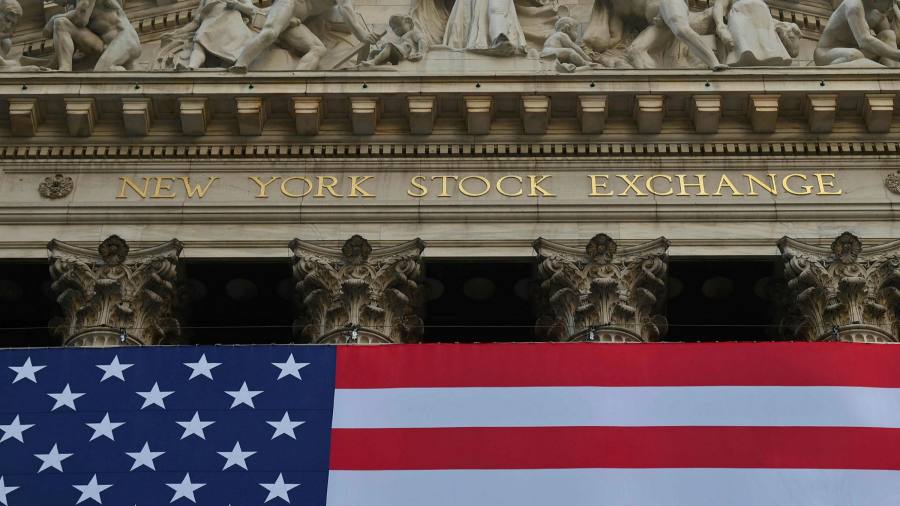 Value and small-cap stocks lead a Wall Street rally after a Democratic party win in a key Senate race raised prospects of a bigger fiscal stimulus that could feed through to economic growth and higher inflation.

In afternoon trading in New York, the benchmark S&P 500 had risen 1.2 per cent, while the Nasdaq 100, which tracks the largest stocks on the technology-focused index, gained 0.3 per cent, reversing earlier losses.

US government bonds sold off sharply, with the yield on the benchmark 10-year Treasury climbing 0.09 percentage points to breach 1 per cent, its highest level since March.

Banks, materials and energy shares led gains on the S&P 500 as investors switched into these long-unloved “value” sectors that are sensitive to economic growth prospects.

“The market consensus is that Democrat control of both houses [of Congress] means stimulus and infrastructure spending, so in the near term that means more economic growth,” said Ben Laidler of Tower Hudson Research. “The stocks that are most driven by this are companies in cyclical industries and small-caps, where earnings have been more depressed.”

“The market expectation in the longer term, sometime later this year, is for an infrastructure bill with a price tag in the trillions” of dollars over a 10-year period, said Brad Neuman, director of market strategy at Alger. The market is looking at a package of between $1tn and $3tn, Mr Neuman said.

Hopes that an infrastructure plan will move higher up in president-elect Joe Biden’s agenda helped to boost sentiment in stocks bound to benefit from additional government spending such as Vulcan Materials and Martin Marietta, which were gaining close to 10 per cent in the material sector. In industrials, Caterpillar was in demand with a 5.6 per cent gain.

The small-cap Russell 2000 index, which has a high weighting of stocks in economically sensitive industries such as finance and manufacturing, rose 4.9 per cent. London’s FTSE 100, which is skewed towards the energy, banking, materials and industrials sectors, closed up 3.5 per cent.

In a crucial Senate race in Georgia, the Associated Press declared a win for Democratic challenger Raphael Warnock. His fellow Democrat Jon Ossoff clung to a narrow lead in the second contest with The New York Times forecasting a more than 95 per cent chance of victory.

A Democratic party victory in both run-off elections would result in a 50-50 split of the upper house of Congress with incoming US vice-president elect Kamala Harris able to break the tie in significant votes such as budget resolutions. 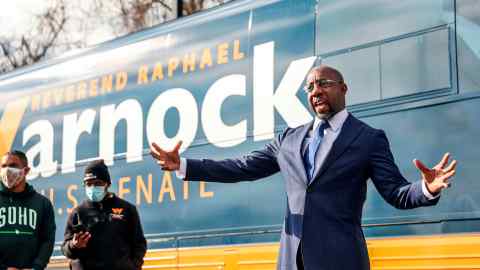 The Nasdaq 100 gained almost 48 per cent in 2020, as the pandemic boosted tech businesses and lower bond yields prompted investors to place higher valuations on growth companies.

Tech investors have also been wary of a so-called blue sweep because president-elect Joe Biden has campaigned for tougher antitrust rules and taxation for the sector.

“The market is taking a view that we will see more stimulus and this will have to be paid for,” said Stefan Keller, asset allocation specialist at investment house Candriam. “The fear is of higher taxes on the most successful companies of 2020, which are the tech giants.”

In Europe, the continent-wide Stoxx 600 index ended the session 1.4 per cent higher, buoyed by shares in the energy and financial services sectors.

Oil prices rose, with global benchmark Brent crude up 1.7 per cent to $54.50 a barrel, its highest since February 2020. Prices were boosted after Saudi Arabia pledged to cut output in a deal reached on Tuesday evening with fellow producers in the Opec+ group.

Copper climbed to its highest level since 2013, above $8,000 a tonne, boosted by hopes that Mr Biden’s plans for a green stimulus would increase its use in electric vehicle charging and wind turbines.

“Democrats controlling both houses would mean that they could pass through larger fiscal packages, but with filibuster rules, co-operation is still necessary,” said Sebastien Galy, senior macro strategist at Nordea Asset Management. “Such [a] boost to the economy is . . . the logical move to avoid an economy being stuck in a low-growth environment quite quickly.”

Ghosts in the Clouds: Inside China’s Major Corporate Hack