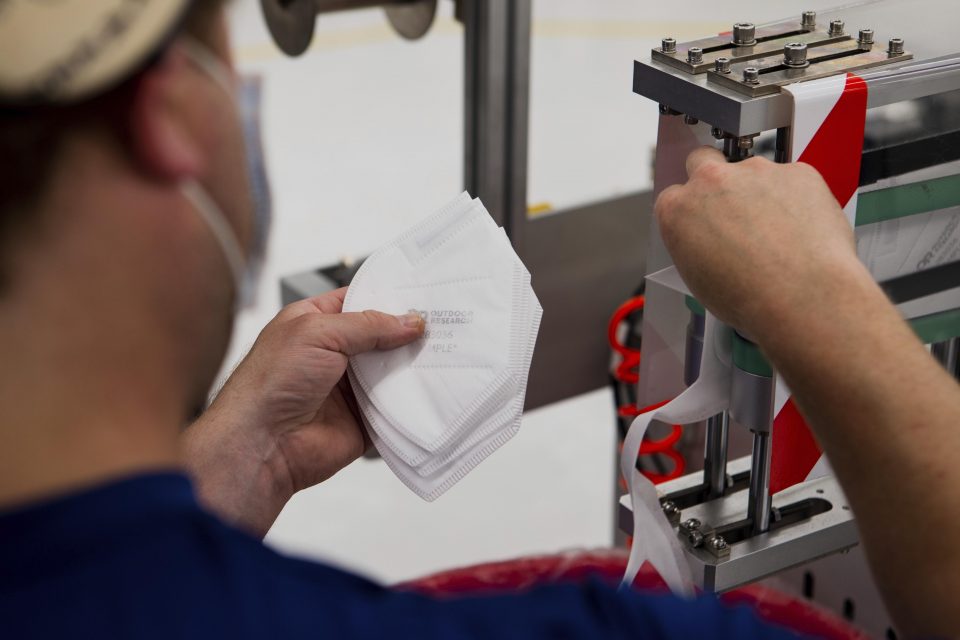 FRESNO, Calif. — White House officials say U.S. hospitals have all the medical supplies needed to battle the deadly coronavirus, but frontline workers, hospital officials and even the Food and Drug Administration say that’s not the case.

Shortfalls of medical N95 respirators — commonly referred to as N95 masks — and other gear started in March, when the pandemic hit New York. Pressure on the medical supply chain continues today, and in “many ways things have only gotten worse,” the American Medical Association president, Dr. Susan Bailey, said in a recent statement.

Behind the bottleneck is a scarcity of the crucial component inside the masks: meltblown textile.

The Associated Press has found the White House failed early in the pandemic to heed stark warnings of looming shortages and took months to sign contracts with companies that make the meltblown material. Even today, manufacturers say the Trump administration hasn’t made the necessary long-term investments they need to meet the soaring demand.

Meanwhile, the administration allowed meltblown exports to slip out of the country as health care workers switched to reusing masks — a practice considered dangerous before the pandemic began.

Manufacturers say they risk significant losses if they invest millions in machinery, raw materials, new employees and factory space to churn out a product projected to have a short-lived demand, without assurances that the government will continue to buy their meltblown textile after the need for N95s recedes post-pandemic.

“I’m not going to sit here and tell you that we’re going to guarantee purchases in 2021 or whatever date you pick,” said Rear Adm. John Polowczyk, who heads the Federal Emergency Management Agency’s Supply Chain Stabilization Task Force. He denies there are shortages.

N95 manufacturers say they’re designed for single-use, to be thrown out after each patient. But due to shortages, the Centers for Disease Control and Prevention instructed health care providers to reuse them. Because of this shift in usage, it’s hard to accurately estimate the severity of the shortages of medical-grade masks and gowns.

“We have what we need to get to people what they need,” he said.

But today, hospital administrators say they can’t get as many masks as they want, and the FDA included N95s on its most recent medical supply shortage list.

Mike Clark, a division president at Hollingsworth and Vose of East Walpole, Massachusetts, said his company has tripled production of meltblown by ramping up and exiting other markets. But he and other makers have reservations about investing significant sums of their own money.

After the H1N1 epidemic in 2009, Hollingsworth and Vose purchased a new meltblown machine, but the demand for N95s plummeted when the virus dissipated, Clark said.

The company received a government contract for $1.9 million to produce an additional 27.5 million N95 masks, but it doesn’t include long-term purchase guarantees.

Between mid-April and early May, four N95 manufacturers — O&M Halyard, Honeywell, 3M and Holingsworth and Vose — received a total of $134.5 million to increase production. The federal government also approved smaller contracts this summer with NPS Corp. and Lydall to bolster meltblown production.

But the Trump administration has not specifically restricted exports of meltblown material, a power it can use under the Defense Production Act. And U.S. manufacturers have continued exporting this textile overseas.

U.S. manufacturers sent more than 40 shipping containers of meltblown material and related supplies offshore, with about 40% of it going to Pakistan, according to an Associated Press analysis of data from Panjiva, the supply-chain research unit at S&P Global Market Intelligence. That compares with only six shipping containers during the same period in 2019.

Pre-pandemic, 24 U.S. companies were making meltblown, with 79 machine lines in operation, according to Brad Kalil of the Association of the Nonwoven Fabrics Industry. But only a fraction of that was going into medical respirators, Kalil said.

“If every single country and region decides they’re going to make their own to be self-sufficient, we’ll have way too much meltblown probably within the end of next year,” Kalil said.

Still, some U.S. companies are rolling the dice.

As Seattle became a major coronavirus hot spot this spring, the clothing and sportswear company Outdoor Research also switched gears. It had the money, two U.S. factories and highly skilled employees, so it set out to make masks, said Jason Duncan, a company vice president.

The company started with cloth masks for the general public, but soon pursued making medical-grade masks, investing millions to convert an entire floor of its downtown headquarters into an FDA-approved facility.

Outdoor Research used its deep ties in the industry to secure meltblown material and, this summer, the FDA approved its N95 masks.

Where is it getting its meltblown?

Covid-19: How safe are our doctors? – Times of India

Worried about what your child is doing online? The Government is here to help

Building resilience should not lead to trade barriers