Generally, closed-end funds are sought after for their high distributions. These are typically paid on a monthly or quarterly frequency. Monthly paying funds are especially appealing to income-oriented investors. However, within the world of CEFs, some funds fit a bit of a different mold. There are semi-annual and annual dividend payers too. These generally have a very narrow focus. It also is interesting to note that they are relatively older too.

For some funds, year-end special distributions are when they can share a little extra with shareholders. This can be as they distribute out capital gains realized throughout the year – making sure they stay in compliance with the registered investment company regulations. The majority of funds are generally structured as a RIC and not a C-corp. This requires them to distribute out a certain amount to avoid paying taxes on the fund level.

Among other requirements, a Regulated Investment Company (NYSEMKT:RIC) is required to pay out 90% of its investment company taxable income so it will not be taxed as a corporation. Practically speaking, most RICs pay out 100% of both their ordinary income and capital gains to avoid any fund-level taxation. Internal Revenue Code (NYSE:IRC) Section 855 allows a RIC to pay these dividends to investors up to one year after the end of a RIC’s tax year and take a deduction for that tax year.

However, for some funds, semi-annual and annual distributions are their only distributions. Below we list these CEFs and give a brief overview of several of them that might be interesting for investors. 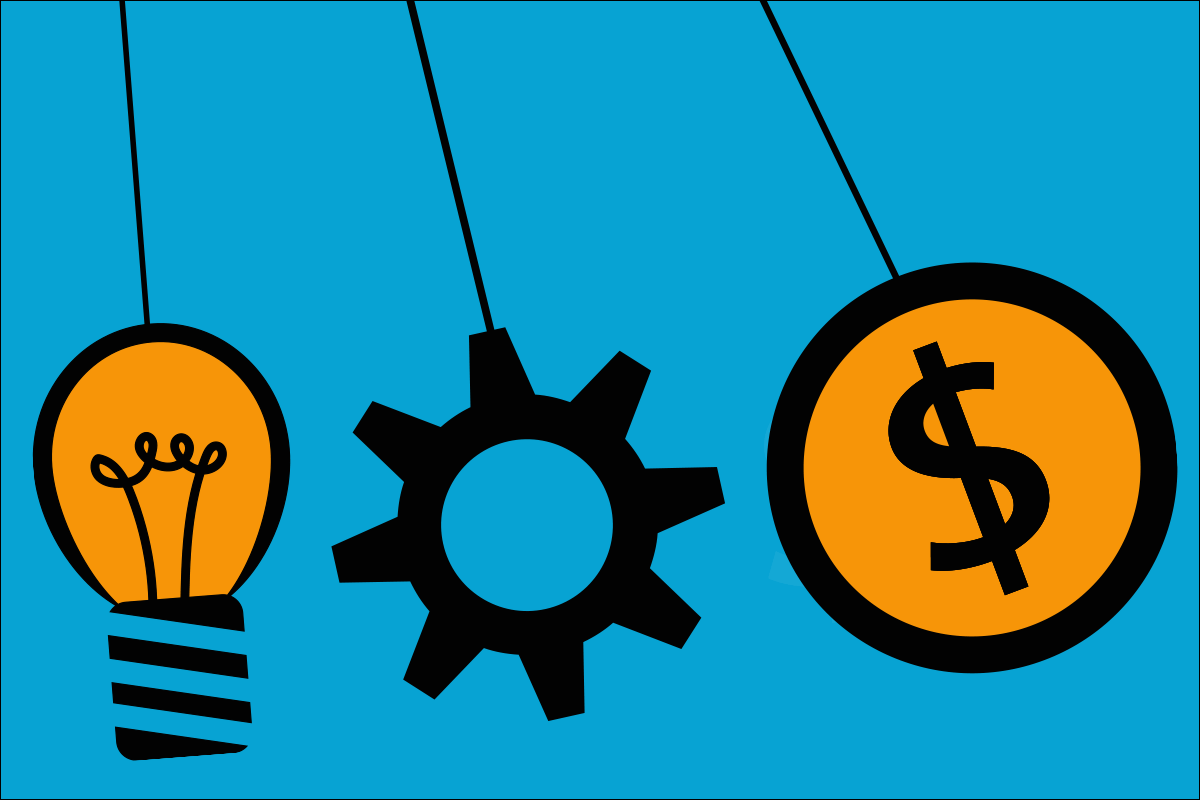 Taxes And Other Considerations

Another characteristic of these funds is that when they do make these infrequent distributions, they can be generally large. That leaves investors with a potentially large cash pile that they can capitalize on. Of course, just like any other investment going ex-date means that their share price is adjusted to reflect this future distribution. That means it doesn’t matter if you buy the shares before or after, the result will generally be the same. You will either be left with cash being disbursed into your account or being able to buy shares at a cheaper price than previously.

However, some investors might find this cash infusion into their portfolio as a bit of a “bonus.” This can fit right along with retirees as they might be a replacement from the bonuses they received during their accumulation phase from their careers.

Investors should also realize the tax consequences they may have if held in a taxable or retirement account. The primary benefit of holding in a taxable account would be able to have a lower tax obligation. This is due to the fund’s distributing out long-term capital gains. The long-term capital gains tax is generally lower than ordinary income, under the current U.S. tax code for 2020. If holding in an IRA, this benefit isn’t there because all distributions from an IRA are taxed at ordinary rates. Of course, if held in a Roth IRA, none of these two issues are a problem if the account has been held long enough. 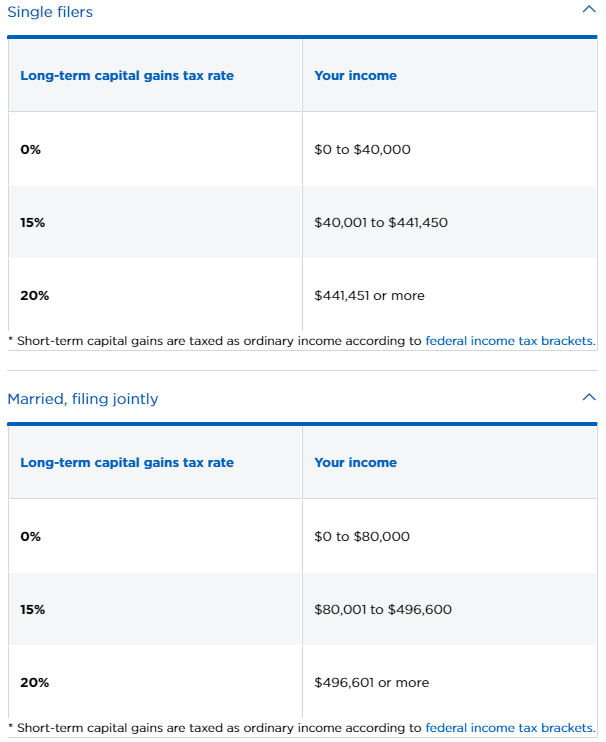 Please check with a tax professional for individual situations and tax advice.

An interesting part of these funds is their niche focus. They are primarily focused on investing in specific countries. This is perfect for the CEF structure as they can generally hold these more exotic investments. They also give professional management to areas of investing that most retail investors aren’t knowledgeable enough to invest successfully. These can be areas of the market that aren’t even easily accessible for retail clients too.

Besides the niche factor, the irregular distribution payout schedule can be unappealing to most investors. That also plays a role in why many of these names trade at significant discounts as we will see below. Thus, investors aren’t interested in bidding these names up to par.

In the lists below, we sorted by discount/premiums. We didn’t include the distribution rate as they are all over the board. It depends significantly on what the funds were able to gain over a 6-month or 1-year period. This inconsistency means that the past distribution rate doesn’t apply to future distributions.

FXBY is listed as an “annual” frequency. However, they don’t pay every year. The fund is also very small at less than $10 million in total assets. So, while it is at the steepest discount, it is an immediate pass for me.

GRF is a bit more interesting. However, they are also very small with less than $37 million in total assets. The fund has been around for a long time though, since 1990. They invest in a more diversified portfolio, but Berkshire Hathaway Inc (BRK.B) makes up almost 20% of its portfolio. Due to the size and rather boring portfolio, this is another pass.

CAF is where we start to get to names that might make sense for investors. CAF, along with CHN, allows an investor to gain some direct exposure to Chinese companies; if that is something that one wants exposure to. Some might be avoiding anything related to China lately as the relationship between Washington and Beijing remains strained.

However, CAF has a reasonably sized portfolio that investors aren’t exposed to extreme liquidity issues. They manage ~$586 million. CHN is a bit smaller with ~$320 million managed.

Both of these funds pay annually; however, they have some minuscule distribution years or years where nothing is distributed at all.

CAF’s distribution history can be seen below.

Another fund that might show some interesting is EMF. The fund invests broadly into emerging markets – though China is the largest geographical allocation. The fund has total managed assets of ~$288 million. The fund launched in 1987, meaning they have a lengthy history. A history that is as volatile as one would imagine with an emerging market investment!

With such a volatile price performance, this has translated to a volatile annual distribution as well.

To move onto some funds with a bit more regularity to their distributions; we can look at the semi-annual payers. In general, these still aren’t as regular or “smooth” of distributions as we typically see with quarterly or monthly payers. Again this list is also listed by steepest discount to the tightest discount. None of the funds discussed in either list are in premium trading territory.

CET, while having a long history of inception in 1980, isn’t particularly interesting. The fund is a rather large one though at over $916 million managed. However, the main drawback in my eyes is a rather boring portfolio. That is all except the largest position that comes in at over 22% of the portfolio. The Plymouth Rock Company, Inc. is a private insurance company. Underneath that position is a generic diversified portfolio. The kind that we can find in other, more appealing funds.

I put asterisks next to SWZ as the fund is listed as a semi-annual payer, it seems they have changed recently. 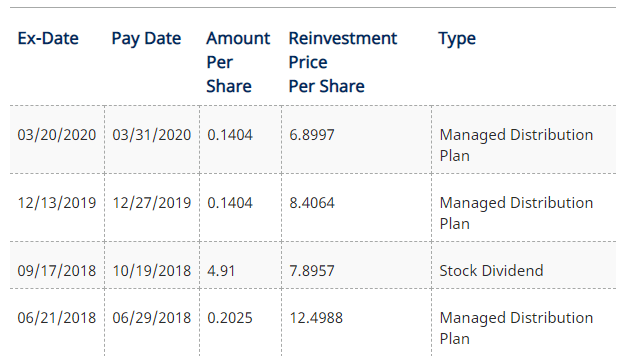 Though they had historically been a semi-annual payer previously for many years. Perhaps initiatives to reduce their historically large discount.

ASA is also worth pointing out here. This fund invests in precious metals and mining companies; primarily mining companies of “at least 80% of its total assets.” The fund is fairly sizeable at almost $500 million assets. The fund also has a significant amount of history behind it as it was launched in 1958.

The big push into precious metals and mining companies recently has seen this fund blast off higher. On a YTD basis, they are showing a total NAV return of 57.75% and a total share price return of 72.97%, according to CEFConnect as of July 31st, 2020. Additionally, from their Fact Sheet, they have just been blowing it away because of such a strong performance this year. 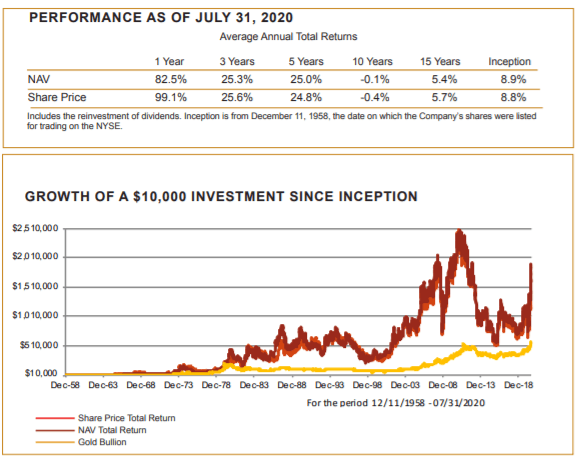 They even have somewhat of a regular distribution history more recently. Paying a regular level amount of $0.01 the last several years semi-annually. Though previously it was $0.02 and prior to that it was an irregular amount. That is nothing significant, to be sure, but one can collect something while staying hedged or taking a speculative position.

Another fund here that might be of interest to a more broad range of investors is TDF. This is also a fund that invests quite heavily in China. Currently, the allocation to Chinese companies is 97.23%. Within that, the sector breakdown is rather diversified. The largest three sectors include financials, retail and media & entertainment – though all the other industries/sectors appear to make at least a small appearance as well.

The fund is sufficiently large enough too for retail investors, with ~$928 million in managed assets. The fund has a relatively long track record than other CEFs, with inception in 1994. Though many other funds on these lists have been around considerably longer than that.

While the amounts of the distributions have been rather inconsistent, the semi-annual frequency has been regular for a considerable amount of time.

Investing based solely on the frequency of a distribution should come second, investing in a position that an investor believes to show value or meet an objective of the investor should come first. If the position doesn’t make sense for your portfolio, then it should be a pass. That is even if you are looking for “bonus” money.

CEFConnect has a screener and distribution frequency is one of the criteria, this makes it rather useful for finding more information on semi-annual and annual payers.

Additionally, there is a screener at Market Chameleon that is also useful for sorting investments by frequency of their dividend. This doesn’t include just CEFs though, it also includes ETFs and individual companies.

These holdings might not be for everyone, but I hope that it was of interest. Many of these funds are rather oddballs that won’t be discussed anywhere else. For me, ASA looks like the most appealing choice for a bit of a speculative position. Although its incredible run recently means that all the “easy money” has probably been made and the upside might be limited from here!

At the CEF/ETF Income Laboratory, we manage ~8%-yielding closed-end fund (CEF) and exchange-traded fund (ETF) portfolios to make income investing easy for you. Check out what our members have to say about our service.

To see all that our exclusive membership has to offer, sign up for a free trial by clicking on the button below!

Disclosure: I am/we are long ASA. I wrote this article myself, and it expresses my own opinions. I am not receiving compensation for it (other than from Seeking Alpha). I have no business relationship with any company whose stock is mentioned in this article.

Additional disclosure: This article was originally published to members of the CEF/ETF Income Laboratory on August 24th, 2020.

Amazon no longer trying for distribution center in Gaithersburg