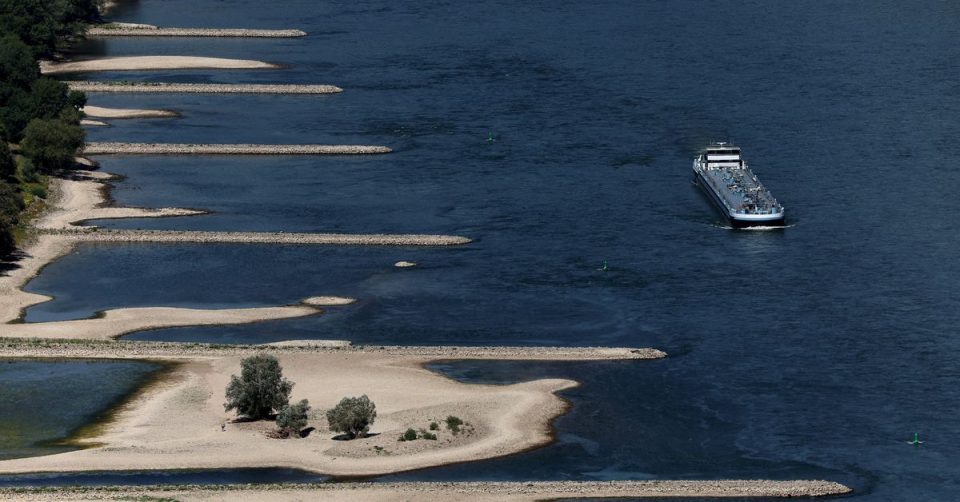 A transport vessel cruises past the partially dried riverbed of the Rhine river in Bingen, Germany, August 9, 2022. REUTERS/Wolfgang Rattay/File Photo

HAMBURG, Aug 12 (Reuters) – Water levels on the river Rhine in Germany have fallen again in dry weather on Friday, with some vessels no longer able to sail, shipping operators and brokers said.

Rhine cargo shipping continues, but with vessels sometimes forced to sail three-quarters empty with cargo owners often needing to pay for four vessels to transport their loads instead of one.

Container logistics service company Contargo said on Friday it would largely discontinue its barge operations on the Middle and upper Rhine river, transporting what goods it could overground to its terminals on the Lower Rhine, warning however that its trucking capacities were limited.

“Due to the difficult situation we regretfully have to point out that we can no longer guarantee to meet all deadlines,” it said in a statement.

There is no specific level at which shipping stops, said Roberto Spranzi, director of the DTG shipping cooperative which operates about 100 cargo vessels on the Rhine. “We are continuing to sail today and we will continue sailing until we reach the nautical technical impossibility.”

Some larger vessels and barges can no longer pass Kaub and in Duisburg, the large pusher-tug/barge units which in normal times carry 3,000 tonnes a barge can no longer operate, he said.

Loads are being transferred to larger numbers of smaller canal barges able to operate in the shallow water, increasing costs for cargo owners.

“Customers are only ordering the supplies they really need to keep production going,” he said.

Spot prices for a liquid tanker barge from Rotterdam to Karlsruhe south of Kaub were unchanged on the day at about 110 euros a tonne on Friday, but up 16 euros this week and up from only around 20 euros a tonne in June, brokers said.