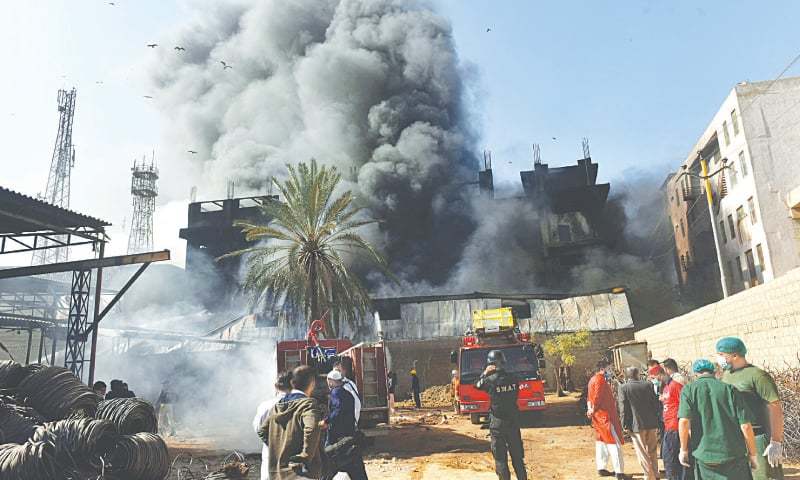 KARACHI: At least seven workers were burnt and injured while two others were rescued when a huge fire broke out in a chemical factory in SITE area on Saturday, said police, fire brigade and rescue services officials.

They added that the fire broke out in a warehouse of Adamjee chemical factory near Babar Kanta at Haroonabad, SITE.

SITE-B SHO Zawar Husain said six to seven people were burnt and injured who were taken to the Abbasi Shaheed Hospital. They were discharged after first aid as none of them received life-threatening injuries.

Two other workers were trapped in the factory but were later rescued with the help of a snorkel.

Cause of the blaze yet to be ascertained

Three other wounded — Usman, 27, Altaf, 25, and Mohammad Ali, 25 —were taken to the Abbasi Shaheed Hospital.

They all suffered wounds as they had jumped from a wall to save their lives.

The SHO said it was a chemical warehouse which imported sprays and other chemicals.

The blaze erupted at 9.15am. It was a huge fire and thick smoke billowing from it had engulfed nearby areas, causing breathing problems for residents.

Since chemicals were kept there, explosions took place, triggering fear and panic.

The fire brigade said the fire was controlled by 3pm, however cooling work continued till late in the evening.

A total of 14 fire engines — eight fire engines from KMC and two each from KPT, PN and PAF — took part in extinguishing work.

The cause of the fire and estimation of loss could not be ascertained immediately.

However, police official Zawar Husain added that the three-storey building was badly damaged in the fire.

He said that any action about possible negligence of the factory administration may be taken into consideration in final report of fire experts.