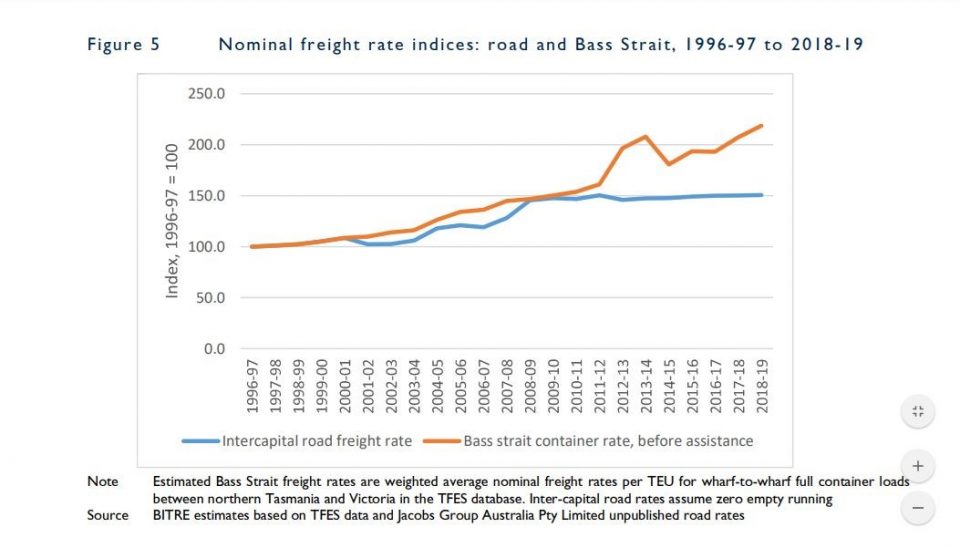 The report is the first four-yearly BITRE’s monitoring review of all components of the TFES. The focus is the volume and value of eligible claims for goods shipped between Tasmania and the mainland up to 2018-19.

The rise relates to full container wharf-to-wharf freight rates for Tasmania to Victoria TFES claims and is almost entirely due to a strong divergence between the ship rate and road freight.

No further detail is offered on rates performance, which is based on BITRE estimates based on TFES data and consultancy Jacobs Group Australia unpublished road rates.

This was around the same as in 2017-18, but around 50 per cent higher than four years earlier, largely due to the introduction of the expanded component of the TFES covering goods shipped from Tasmania to the mainland for transhipment.

About 90 per cent of total TEUs in 2018-19 were shipped to or from Victoria, with the next most common state, New South Wales.

The median time between shipment and payment of the TFES assistance was 119 days and the maximum was 585 days.

“BITRE understands the latter was due to an invoicing error related to the claim,” it says.

The full report can be found here.

Global Oceans Heated Up To A Record High In 2020, Due To Rapid Climate Change