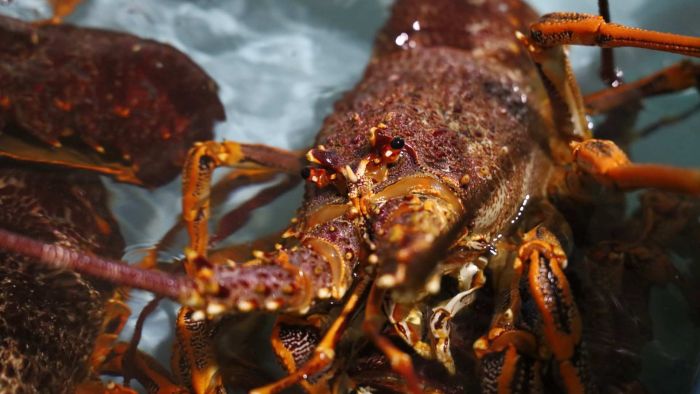 Port MacDonnell-based exporter Andrew Ferguson said beginning prices for fishermen in the southern zone were sitting around $80 per kilogram.

“It’s good — the price is not as high as it has been in other years, but that’s probably coming from a bit of other competition in the marketplace from elsewhere,” Mr Ferguson said.

“It’s the medium sizes that are in demand at the moment, so [prices are] a bit better than I thought it would be.”

But starting the season in September has left question marks over prices and lobster behaviour.

Robe Professional Fishermen’s Association president Paul Regnier, who has been fishing for 34 years, said it was the first time he had fished in September.

“[The lobsters were] a little bit quieter than I’d hoped, but we still managed to get a few,” he said.

“It’s all new to me, so I was a little bit disappointed with the catch today, but things should pick up.

“Crayfish are fickle little creatures, and it all depends on the weather and conditions.”

A shot at recovery

Demand for the delicacy crashed in January this year when the industry’s main export market, China, was affected by the initial outbreak of coronavirus.

Mr Regnier said it was “terrible timing” for the industry.

“The Chinese New Year is our best time to sell lobsters to China,” he said.

“It’s when we get our best price, [and] the most volume gets sent over there.”

Earlier this year, the South Australian Government met with the industry to establish support measures, such as bringing forward the start date for next season and rolling over any uncaught fishing quota into the available catch.

Robe fisherman James Braithwaite said it “made sense” to start the season early.

“I think it’ll help, especially with the little bit of extra quota to catch this year,” he said.

“There are a few days in late September in China where they celebrate things, and we always miss that, starting on the first of October.”

“We can capture the last week of the celebrations in China that leads up to it [the Mid-Autumn Festival in October],” Mr Ferguson said.

“It’s a big advantage, and that’s why the price is a bit stronger at the moment.”

But fishers are still worried about the availability and reliability of regular international flights to China and other export markets.

Mr Ferguson said freight availability was in an “okay” position due to the closure of the Victorian and Tasmanian seasons.

“We’ve booked a bit of space so there’s just enough at the moment,” he said.

“Export freight has gone up considerably seeing as it’s only freight on planes.”

He said they were grateful for the Government’s support of freight flights to key export markets.

In a statement, a Government spokesperson said direct flights were “critical” for exporters of high-value seafood and perishable produce.

“We have established agreements with Singapore Airlines and Cathay Pacific to run regular air freight services into Singapore and Hong Kong, providing an opportunity for SA exporters to sell high-value goods into the Asian market,” the spokesperson said.

“Earlier in August we were delighted to welcome Qatar Airways back to Adelaide when they commenced twice-weekly flights to the key hub of Doha, [and] Qatar joined Singapore Airlines and Cathay Pacific, flying into Hong Kong.

“The more produce we can get onto these flights, the more export dollars return to South Australia, and I encourage any air-freight exporter wishing to access this service to speak to their freight forwarder.”