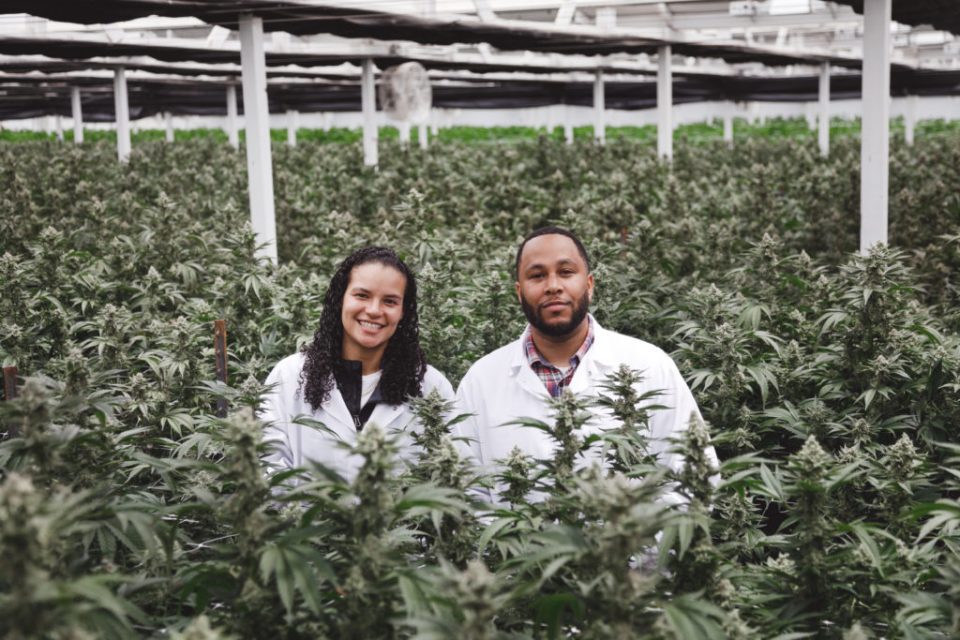 In the farmlands of Salinas, there’s one 50,000 square foot greenhouse that stands apart.

Operated by Allen Hackett, the building and the precious plants that grow there are part of a family of vertically integrated, Black-owned cannabis brands headquartered in Northern California. The spark that created MD Numbers, Inc. — which itself incapsulates MD Farms, Marie’s Deliverables, and Legacy Coterie — came when Hackett met Marie Montmarquet,

Though the two aren’t technically related, Hackett refers to Montmarquet as his sister as the two are now co-founders of an operation that stretches from San Francisco to the Central Coast. While Montmarquet runs the delivery business up north, Hackett tends to the farm side of things. They are also minority owners in the delivery company Cannabis Express.

Working out of a property that was last used to grow orchids twenty years ago, the team in Salinas are now producing roughly 300 to 500 pounds of cannabis monthly for the wholesaler market. Grandfathered into the recreational market, Hackett says his company has had a fairly smooth relationship with Monterey County thus far.

“They’ve given us the space to figure things out,” he says. “They didn’t come out super aggressive with regulations to the point where we didn’t have time to comply.”

In addition to selling finished flower to wholesalers, the business also draws income from selling clone plants of their genetics as well as selling the farm’s trim (plant debris like stalks and stems) to oil manufacturers, who do not require full plants to create their products.

In truth, there’s little MD Farms doesn’t do. Their in-house capabilities also include private labelling and “vegging” out cannabis plants for other cultivators who don’t have the space.

There are also more plans on the horizon, like a proprietary brand set to be formalized next year. As Hackett explained, while the prestige of having your own brand is great, the practicalities of selling wholesale are hard to ignore.

“We’re working on all of those details,” he says, “but the thing with wholesale is it’s COD. You get paid for the flower on purchase. With your own brand, you’re fronting the product and then being paid back once it sells. We just finished paying off our last debts this year, so now that’s something we can really focus on.”

There’s also another reason to package at least some of the flower Hackett’s growing into something immediately identifiable as coming from MD Farms: awareness.

As more and more cannabis consumers become aware of equity operators and the imbalances that exist in the larger legalized industry, demand for products from Black and minority-owned businesses will likely continue to rise. Hackett agrees with this outlook, though he cautions against narrowing the purview of who his company can serve.

“There are individuals who want to work with us as a Black-owned business, definitely,” he noted, “but we want to help uplift as many people as possible in the process.”

In practice, Hackett and Montmarquet’s dedication to this principle has thus far taken many forms, including hosting monthly tours in partnership with the San Francisco non-profit Success Centers.

“We have folks from Oaksterdam and other equity applicants working with Success Centers come down here just to see this in motion,” Hackett says. “I think that’s really important, just for Black and brown folks to see that they have a place here and that this is possible.”

Beyond facilities dedicated to growing, curing, and trimming, there is also a nursery and a large tract of land that will soon house the plants grown for MD Farms’ own brand. Hackett says he and Montmarquet are still figuring out what to call it, but whatever name it bears, it will definitely be another family affair.

Family is a big point of emphasis at MD Farms, where the definition of the term seems to matter far less than embracing the mentality it conjures.

“See that guy?” Hackett asks, pointing to someone exiting a greenhouse towards the end of our tour. “That’s my buddy. I flew him out here to work with us from back East.”

Several more times over the course of the tour, Hackett will share similar anecdotes.

Collectively, they speak to an understanding on his part of cannabis cultivation as a communal activity (at least when done at scale). Thus, it’s no coincidence that Hackett has kept the same core crew for years — quite the feat in the ever-shifting, poach-happy world of legal cannabis.

Hackett is rightfully proud of the team he’s built and their interest in sticking with him.

“Even if it’s a little slow right now,” he says, “things are always busy here. We take 72 hours between when one harvest ends and another begins. That says, it does feel good to provide jobs and to keep people employed, especially right now.”

Citizen proactivity urged to minimise the impact of natural disasters