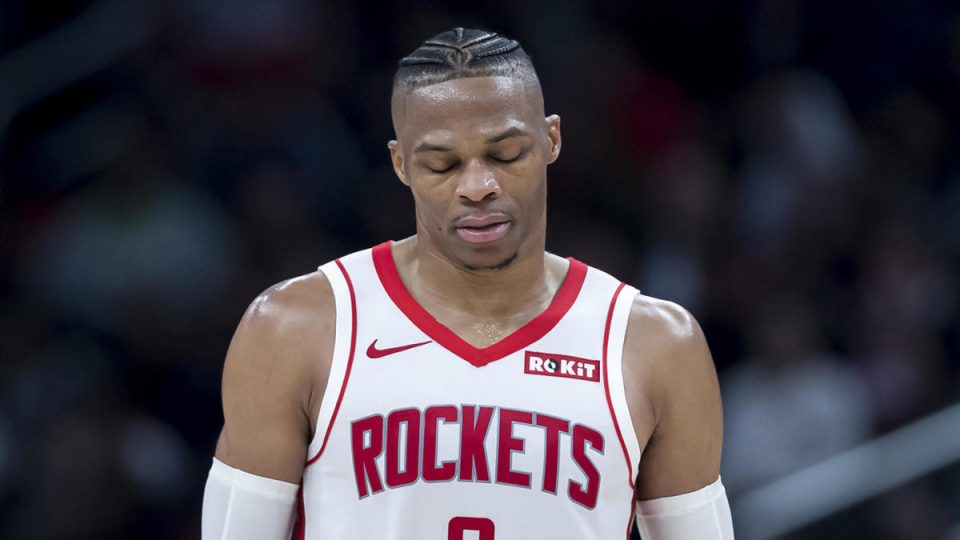 The Houston Rockets are trading Russell Westbrook to the Washington Wizards for John Wall and a 2023 protected first-round pick, according to ESPN’s Adrian Wojnarowski. Westbrook requested a trade earlier this offseason, and fellow Rockets star James Harden did so as well. This came after the Rockets moved on from coach Mike D’Antoni while allowing general manager Daryl Morey to resign and take over the Philadelphia 76ers.

Harden’s trade request was based on a desire to join his former teammate Kevin Durant with the Brooklyn Nets, whereas Westbrook wanted a chance to be a true floor general and primary ball-handler again. In Washington, he should get that chance. While he will be playing alongside another star guard in Bradley Beal, Beal’s excellent shooting and off-ball movement should make the two one of the NBA‘s better offensive backcourts and help launch the Wizards back into contention for a playoff spot in the Eastern Conference.

That has been Washington’s goal this offseason as Beal’s free agency looms in 2022. The Wizards got Beal to agree to a one-year extension last offseason, but historically speaking, teams don’t retain superstars without winning at a high level. Adding Westbrook, a Third-Team All-NBA selection last year, should be a step in that direction for the Wizards.

The Rockets, meanwhile, are taking an enormous risk on Wall. He and Westbrook have virtually identical supermax contracts: three years and around $132 million remaining. But Wall is coming off of a torn Achilles tendon, one of the worst injuries in all of basketball. Considering his preexisting injury issues, there is no telling how valuable he’ll be upon his return, how durable he will remain, or how he will adapt to joining a new team.

But the Rockets, desperate for long-term assets after giving up two first-round picks and two swaps to get Westbrook last offseason, have now added three first-round picks this offseason. They still have to deal with Harden’s trade request and an unsettled roster, but at the very least, they’ve managed to restock the cupboard a bit ahead of what is increasingly looking like an inevitable rebuild. The Wizards, meanwhile, have managed to stave off rebuilding for a little while longer by adding Westbrook. That makes them the likely winner of the deal, but both teams earn strong grades for this swap.

The recent history of ball-handling guards coming off of torn Achilles tendons is absolutely disastrous. Here’s a brief rundown:

These numbers are especially distressing for Wall. Few players in basketball rely more heavily on athleticism. Achilles injuries tend to rob players of explosiveness. His value comes primarily in transition. Wall is a 32.4 percent 3-point shooter for his career. There is a very real chance that he will not be a positive-value player when he returns. With three years and over $132 million left on his contract, that would have been disastrous.

Westbrook has a nearly identical contract. His durability and athletic decline are also viable concerns. We just saw yet again the sort of limitations he presents in a postseason season. But for a team just fighting to reach the postseason, we can comfortably say this: Westbrook is a positive-value player. He is coming off of a Third-Team All-NBA season in which he averaged 30.9 points, 7.8 rebounds and 6.7 assists on over 50 percent shooting across his last 33 pre-bubble games.

A lot of that success came without a center. Washington’s spacing won’t be quite as robust as Houston’s was, but it’s not exactly Oklahoma City either. Any team with Beal and Davis Bertans is going to be able to provide above-average offensive spacing when that is prioritized in lineup decisions. The pre-bubble Wizards finished 13th in offense despite starting Ish Smith and Isaiah Thomas at point guard. The upgrade is considerable.

That upgrade was presumably made in the interest of impressing Beal. He signed a one-year contract extension in 2019, but remains only two years away from free agency. The Wizards have not yet shown any willingness to trade him, suggesting that their primary goal is to surround him with a winning team in order to persuade him to remain in Washington for the long haul. Whether they’ve actually done so is a matter of debate. The Eastern Conference is deeper than ever, and Westbrook’s history of meshing with fellow superstars is… mixed. But Washington is a significantly better team today than they were yesterday. They set a goal and they’ve taken a step toward achieving it.

That isn’t the question here. What should be litigated further is whether the Wizards should bother trying to retain Beal at all. Even with Westbrook, they haven’t fixed their No. 29-ranked defense. Without a functioning defense, they are unlikely to be a top-six team in the Eastern Conference, forcing them to fight their way into the postseason through the play-in tournament. Even if they get in, a first-round shellacking against an Eastern Conference heavyweight like Milwaukee likely awaits them.

There’s honor in fighting to reach the playoffs, but stars rarely stay with teams that can’t launch them into legitimate championship contention. Teams like Miami, Brooklyn and Denver are already there and poised to pursue Beal the moment he becomes available. Nothing is set in stone. Beal could still stay. Washington could have other moves up its sleeve. But even after trading for Westbrook, it still appears likelier than not that Beal will leave, and if that is the case, trading Beal and pivoting into a rebuild would be the wiser long-term course. The return on such a trade would be substantial. The Athletic reported in 2019 that the Clippers pursued Beal before acquiring Paul George. Ask Oklahoma City how it feels about taking Shai Gilgeous-Alexander and five first-round picks.

Fortunately, the Wizards did manage to insulate themselves against Beal’s possible departure fairly well in this deal. The pick Washington surrendered is extremely heavily protected: top-14 in 2023, top-12 in 2024, top-10 in 2025, top-8 in 2026, according to The Athletic’s Shams Charania. There is no scenario in which they lose Beal and the ability to replace him with a top draft pick down the line. You can question their process, but this is the best possible result they could have hoped for on the path they’ve chosen to take. They’ve meaningfully upgraded upon Wall without taking on any extra long-term money or exposing themselves to major long-term downside. That’s a big win.

According to ESPN’s Tim MacMahon, Houston’s intention is still to remain competitive with James Harden. If that intention is genuine, this trade is a head-scratcher. Ignoring the inherent risks in trading for Wall after his Achilles injury, the Rockets have tried pairing Harden with a similarly poor-shooting point guard: former Nuggets speedster Ty Lawson. He started 12 games in Houston, and the Rockets went 4-8. It was the only season of the Harden era in which the Rockets failed to finish above .500, and was the last time Houston finished outside of the top-six on offense. Westbrook is unique. He brought so many things that Houston didn’t previously have that, with serious adjustments elsewhere, the Rockets were able to compensate for his poor shooting. There isn’t much reason to believe that the same can be said for Wall.

Rumors have suggested a greater willingness on Harden’s part to play off of the ball moving forward, which might limit some of the damage Wall’s poor shooting could do to Houston’s offense, but it’s not as though he was some half-court maestro at his peak. Washington finished between 10th and 22nd in half-court points per play in each of his last four healthy seasons, according to Cleaning the Glass. Harden is a better backcourt partner than Beal, but Wall is going to be a worse version himself. Besides, Harden is the best regular-season scorer of his generation. Taking the ball out of his hands isn’t exactly optimal.

But we also have to acknowledge the possibility that Houston’s party line isn’t the truth, but a leverage ploy. If the Rockets did plan to trade Harden, they probably wouldn’t scream it from a mountaintop. It should be noted too that many of the players being discussed in Harden rumors are poor shooters. Playing Caris LeVert or Ben Simmons alongside Westbrook would make no sense. They wouldn’t fit alongside Wall either, but if he truly is a shell of his former self after tearing his Achilles, then plastering him to the bench would be far easier than it would be with a healthy Westbrook.

If the plan is indeed to trade Harden eventually, regardless of return, Wall probably makes more sense for them than Westbrook for a simple reason. The Rockets have a very short window to be bad and rebuild, and Wall is almost certainly going to be a worse player over the next several seasons than Westbrook.

It, therefore, behooves them to be as bad as possible in those seasons in order to find two cornerstones that can carry them through that 2024-2026 dark period. Being bad with Westbrook on the roster is almost impossible. Remember, when Oklahoma City lost Durant, he led them to 47 wins and a playoff berth. Westbrook’s limitations pose serious problems in the playoffs. In the regular season? He’s a menace that guarantees a certain level of competence that Houston would probably rather avoid. An injured Wall comes with no such guarantees, and there’s never a better time to ride out a bad contract than during a rebuild.

In general, the Rockets have done well to reload with younger assets this offseason. They picked up two first-round picks for Robert Covington, and in Christian Wood, they’ve found a 25-year-old potential All-Star on a very modest contract. They did well to pick up another first-round pick in this deal, amazingly giving them more incoming first-rounders (three) than outgoing ones (two, albeit two very valuable picks).

But the Rockets would have done well to hold out for lighter protections on this pick. If Washington does lose Beal, there is almost no chance they remain competitive in the aftermath. The odds of them surrendering a pick outside of the top 14 in the first two years afterward seem slim. If they rebuild quickly afterward, Houston could still walk away with a decent pick down the line. But it must be acknowledged that there is a reasonable chance that the Rockets come out of this trade with no first-round pick at all. Are the post-Beal Wizards a lock to pick ninth or worse in any of the four drafts after losing him? Probably not.

That lowers their grade below Washington’s. Wall was the only player in basketball with a Westbrook-sized contract that could have facilitated this trade. Houston, therefore, got no value out of moving the Westbrook deal. They needed to find value elsewhere to justify giving up the superior player. They might have done so. They might not have. They probably could have extracted slightly more. But if Houston is moving towards a rebuild, their future does look a bit brighter today than it did yesterday.

All Container Heck Breaks Loose amid Flood of Orders from US Retailers to Supply Stimulus-Stuffed Consumers, Cancelled Sailings by Carriers, and Record Spiking Freight Rates