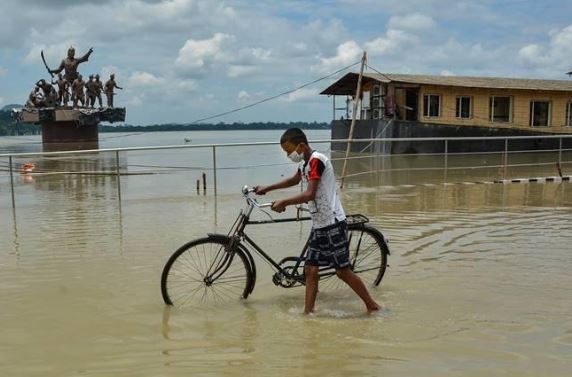 Imagine the pain of a family that must helplessly watch the house where they have lived all their lives, the only roof over their heads, being carried away in a matter of minutes by a roaring river.

It is a sight that has been repeated tens of thousands of times in many in recent years, most prominently in India’s east.

Visiting such places at a later date, I have felt tormented by the sight of a large land mass having been suddenly clawed off, with parts protruding here and there, reminding people of the time they lived here.

From the point of view of farmers, the loss of farmland by river erosion has been even more cruel and harmful than the loss of their home. Those who lose their house can try to rebuild it elsewhere with the acceptance and support of the community, but the loss of farmland is a permanent loss for households who have known only livelihoods based on farmland.

This is all the more true in India where no program of rehabilitation has yet been developed for the many lakhs of people who have been displaced from their traditional livelihoods by river erosion in the post-independence years.

The worst affected are those who have lost their house as well as farmland. But these huge losses by river erosion are not yet classified as a calamity in the way the state recognises earthquakes and floods; as a result aid and rehabilitation funds under disaster response funds are also generally not made available.

While affected people get some immediate relief, their longer-term needs and rehabilitation remain widely underserved.

In the absence of any big initiative from the Union government, the government of Assam, the worst affected state, started a Chief Minister’s Scheme for helping people affected and displaced by river erosion about five years back, but it hasn’t yet brought any significant relief to people.

Consider the vast scale of the problem: Assam is likely to have lost over 400,000 (four lakh) hectares of farmland to soil erosion in the post-independence period, and the number of people who need help and rehabilitation is stated by activists to be around 3 lakhs, perhaps more.

In many parts of the state this has emerged as a major aspect of increasing human distress. The soil eroding capacity of the Brahmaputra and some of its tributaries is reported to be very high.

In West Bengal, the Murshidabad and Malda districts in particular have been affected most adversely by river erosion (by the Ganga) which shows an increasing trend. A large number of people have been displaced and must travel to several distant parts of the country in search of uncertain and precarious livelihood.

The condition is similar in states like Bihar and Uttar Pradesh (particularly in the east) where the problem of river erosion is acute albeit in somewhat smaller regions. In eastern U.P., for example, the problem is acute in Ghazipur and Bahraich leading to distress migration.

In the absence of proper rehabilitation, people affected by river erosion lead a highly uncertain existence and depend on remittances by migrant workers. However this year this form of support has also broken down, as migrant workers had to return in distress conditions without any earnings.

This is a particularly appropriate time to initiate a long overdue plan for the rehabilitation and support of people affected and displaced by river erosion.

As these scattered communities are in great distress, a survey should be combined with providing some immediate relief. Proper survey and study are needed to give a reliable estimate of the number of people who need rehabilitation and other support.

The estimates already available with district and state administrations can be a starting point but need to be rechecked as they have not spent much effort in collecting precise estimates, except perhaps to some extent in Assam and West Bengal.

Further, river erosion should be included as a disaster for which calamity relief funds or disaster response funds are made available by governments on a regular basis. This will help augment resources for the relief and rehabilitation of erosion-affected people on a regular basis.

Once the addition has been made, the overall fund allocation for disaster response should also be increased, particularly in view of the consensus that climate change caused by human industrial activity is increasing the scale and frequency of such disasters.

In addition to ensuring better care for affected people, another priority should be to reduce the extent of erosion-related damage. This is of course a natural process, but it has been increasing at a rather alarming pace in some areas.

In some parts of West Bengal the increase is widely seen to be related to the construction of the Farakka barrage. In other areas, people say that sometimes when a river is embanked, in the areas of its further flow its water become more ferocious and can cause more erosion.

Hence there is a need to give more attention to the various aspects of controlling and channelling river flows, so that any unintended and undesirable consequences can be avoided.

It is vitally important, and a democratic duty, to have consultations with the public, particularly with people living close to rivers and with river-based livelihoods, so that their knowledge of river-flows based on constant living with rivers can be properly utilised in the various efforts to reduce the threat and damage from river erosion.

In the discussions on river-related disasters, more recently in the context of increasing threats in times of climate change, the focus has been mostly on floods, while the often accompanying threat of land erosion has not received the necessary attention, despite the more permanent loss inflicted by river erosion.

It is time now to give due importance to the problem of river erosion and also to the very large number of people displaced by it.

Explained: The new Indian road to Lipu Lekh, Nepal’s protests, and the strategic importance of the area

Bulletproof vests and helmets headed from Upstate to Ukraine