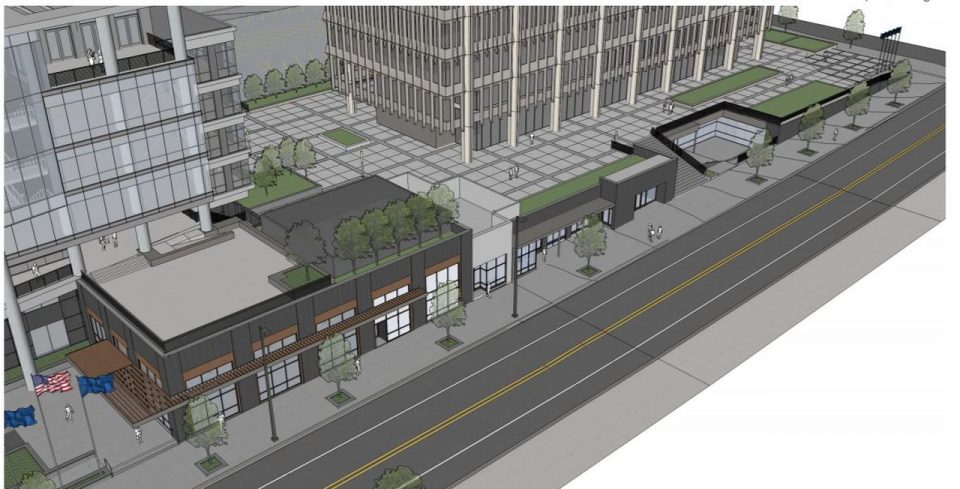 GRAND RAPIDS, MI — CWD Real Estate Investment plans to demolish a granite wall on the north side of Lyon Street NW — between Ottawa and Monroe avenues — and add 18,000-square-feet of ground-floor retail space and heated sidewalks.

The project is part of CWD’s push to renovate the Fifth Third Center, a complex that includes two office buildings and an underground parking garage at the south end of Vandenberg Center. Renovations are underway at one of those office buildings, 200 Monroe Ave. NW, which CWD sold earlier this year to RDV Corporation, the DeVos family office.

Sam Cummings, co-managing partner at CWD, the largest property owner in Grand Rapids, said demolition of the granite wall is expected to start next week. He said the entire project is expected to take about two years to complete.

Because it’s located near DeVos Place Convention Center and several hotels, the area along Lyon Street provides an ideal location for restaurants and retail shops, Cummings said. He said the focus will be on fast-casual restaurants.

“The convention center and the proximity of the hotels within a block really provide the extra boost here to support the kind of co-tenancy that we believe we can put here,” Cummings said.

On Wednesday, the Grand Rapids Downtown Development Authority approved a request to reimburse CWD $950,000 over seven years to cover the cost of the investment the firm is making by adding heated sidewalks to the area.

“We’re going to front the cost to put the snowmelt in all around the perimeter, making a safer pedestrian area,” Cummings said. “We’re paying for that. We’re asking the DDA to reimburse us for those costs for the public improvements.”

The reimbursement also covers a portion of the cost of replacing one elevator at 111 Lyon St. NW.

Tim Kelly, president and CEO of Downtown Grand Rapids Inc., the organization that manages the DDA, said the DDA is authorized to include improvements made in compliance with the Americans with Disabilities Act in its reimbursements.

Cummings said CWD’s overall renovation of Fifth Third Center is expected to cost about $139 million. Roughly $6 million of that is being spent on the retail buildout along Lyon Street NW

Price of water for county, city governments to go up in 2021 | Region