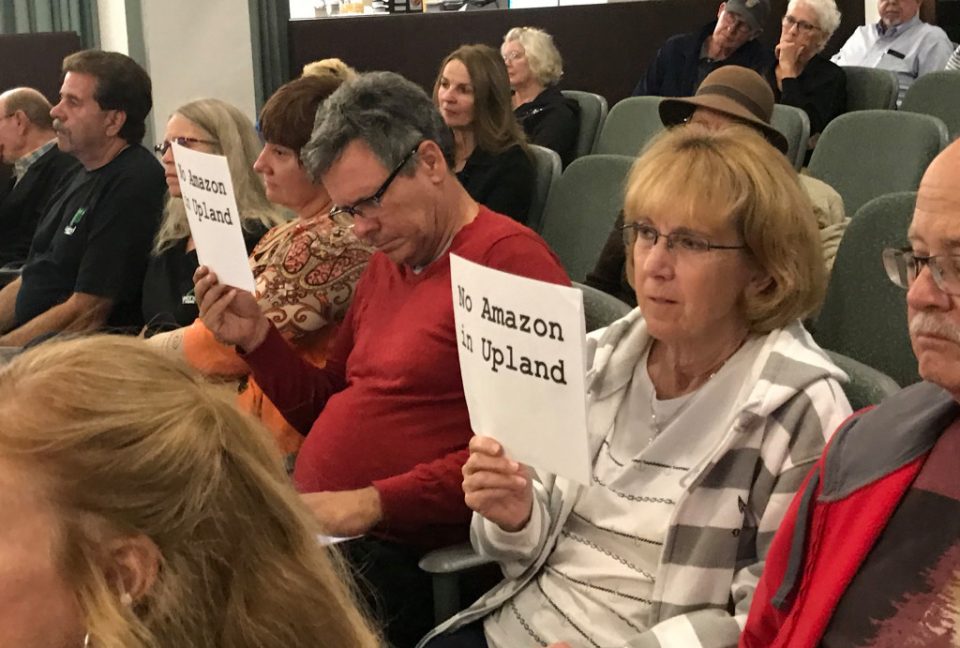 Upland residents are making clear their objections to a proposed logistics warehouse they say will add to street traffic, foul air quality and lower property values.

In a packed City Council chamber on Wednesday, Nov. 13, 11 people spoke to the Planning Commission during public comments — and all were against building a 276,250-square-foot warehouse containing a retail and logistics center on 50 acres at the north side of Foothill Boulevard near the terminus of Central Avenue.

“It doesn’t belong in a bedroom community,” Glenn Bozar, a former council member, told the commission.

The proposal, submitted by applicant Bridge Development Partners, is rumored to become an Amazon fulfillment center, although the developer would not name the proposed tenant.

It would attract 25 big-rig trucks per day. Of those, 20 would be arriving at night and five during the day.

The warehouse is described as “a last-mile center for e-commerce” in which “Upland residents will likely receive packages faster and more efficiently,” according to documents filed by Bridge Development.

The developer reduced the project in scope by 90% since introducing it in June, from three buildings comprising 977,246 square feet to one building, 47 feet high with a 10,000-square-foot office/mezzanine.

The revised project will provide 350 parking spaces and 1,486 spaces for delivery vans and automobiles and 25 dock-high loading spaces, the city reported. Big-rig trucks would use Central Avenue via Foothill Boulevard; autos and delivery vans would use Central Avenue and two other entrances from Foothill Boulevard and 13th Street but 13th Street would not accommodate trucks.

Some speakers said the logistics warehouse would not fit with Upland and that these large warehouses that serve as e-commerce distribution centers are better suited for Fontana, Eastvale and other parts of the Inland Empire.

Despite the substantial downgrading, those who spoke said the project still is not a good fit for Upland.

“The project will clog our streets and pollute our air,” said Irmalina Osuna, a 16-year resident.

Carl Bunch said delivery vans entering and exiting from Foothill Boulevard “is a terrible idea” that will cause traffic jams and collisions. “They will have up to 1,000 delivery vans every day. It is going to be a mess,” he told the commission.

Shannan Maust said the city is in the midst of surveying residents about the type of businesses they’d like to see in Upland. She said the Planning Commission should wait for those results before moving forward.

And Barbara Alejo said the City of Gracious Living should seek out less impactful businesses. “Why doesn’t our city reach out to hotel chains?” she asked the commission.

Bridge has promised the city a one-time payment of $2.25 million to offset city costs. But many in attendance, including City Councilwoman Janice Elliott, indicated that amount would not be enough to pay for street paving and additional police patrols.

“That doesn’t seem like that is enough,” Elliott said in an interview Thursday, Nov. 14.

She remains “open-minded” about the project, she said, at least until the city and Bridge complete environmental studies on soil, water, truck traffic and air quality.

The project would only come before the Upland City Council if a council member or a citizen appealed the Planning Commission’s decision.

“We have to wait until we have the data,” Elliott said, adding that she was impressed with the residents who spoke Wednesday night. She said she’s heard from others who also don’t want to see the project built.

“Some of my constituents are terrified of it,” Elliott said.

Farmers told to sell at CCI procurement centres only