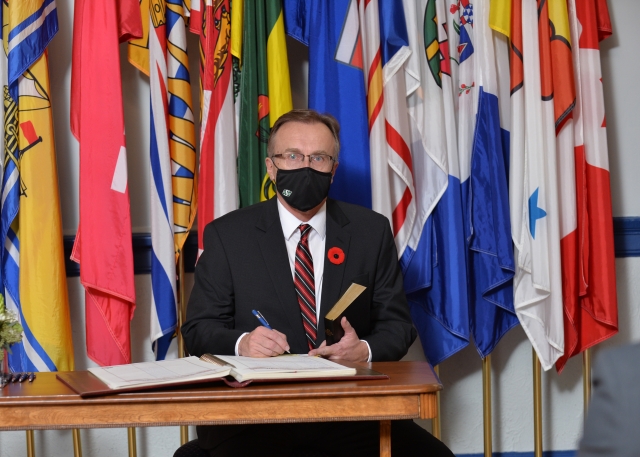 Since 2016 Rosetown-Elrose MLA Jim Reiter has served as the provincial Minister of Health. In political years, serving as Minister of Health since 2016 was an incredibly long tenure. Mr. Reiter likely held onto the portfolio for such a great length of time after he successfully oversaw the amalgamation of the former health regions into one provincial health authority, the Saskatchewan Health Authority.

Now Premier Scott Moe has tapped Mr. Reiter to pull off another major overhaul. Announced at the post-election cabinet shuffle on November 9th, Mr. Reiter is now the Minister responsible for SaskBuilds and Procurement, the Public Service Commission, the Global Transportation Hub, and Minister Responsible for Saskatchewan Liquor and Gaming Authority.

The new cabinet announcement specifically mentions that Mr. Reiter will oversee ‘a new approach to the management of all infrastructure projects and assets, standardized government procurement and IT infrastructure.’ This will be achieved by merging the SaskBuilds portfolio with the Central Services portfolio to create a single Ministry of SaskBuilds and Procurement.

Mr. Reiter says the planned overhaul is about capturing efficient economies of scale.

“I think the big issue here though, the merger of SaskBuilds with Central Services, plus that new entity, we’re going to be looking at procurement right across government.  I think that there’s been, sort of forever in Saskatchewan, so many different arms doing procurement; that we just think merging this together will provide some economies of scale. So it’s going to be more efficient that way. Plus you can build a expertise on it in one area. So I think there’s a ton of potential on where this can go.”

SaskBuilds is a crown corporation charged with overseeing large infrastructure projects for the Provincial Government. After an election filled with capital announcements, and as the province emerges from the pandemic, the crown corporation has a busy four years ahead.

GoLocalProv | Increasing Charges That RI Is Failing in Environmental Enforcement