Now, a number of high-profile cases are emerging and citizens groups and high profile environmental groups are criticizing the Rhode Island Department of Environmental Management (RIDEM) and Raimondo’s vigilance or lack thereof in protecting the environment.

One of the high profile environmental cases now under review is the contaminated soil dumped in a Providence neighborhood as part of the RI Department of Transporation’s (RIDOT)  6/10 project —  a case which was brought to the attention of state officials in July, but the charges levied by a whistleblower were only investigated after GoLocal report unveiled the issues.

Others claim RIDEM is ignoring serious water pollution issues and claim they have been forced to go to the U.S. Environmental Protection Agency because of Rhode Island’s lack of enforcement.

The charges include less enforcement, fewer staff, and a decline in the collection of penalties.

And, questions are emerging about Rhode Island Attorney General’s enforcement record. In his first near two years in office as the state’s chief law enforcement official, there has been little emphasis on pursuing environmental crimes.

In the first 20 months in office, Neronha issued 139 press releases and just one was related to environmental enforcement.

The press release claimed that his office had levied a record penalty, but the majority of the fine was waived as part of the settlement — no longer making it a record penalty.

As U.S. Attorney, environmental enforcement plummeted during the Neronha era. Under Neronha between 2013 and 2018, his office issued more than 820 press releases and just two dealt with the environment.  One of the announcements regarded a 20+ year old Superfund case and the other was a settlement agrement by U.S. Environmental Protection Agency againt RIDOT. 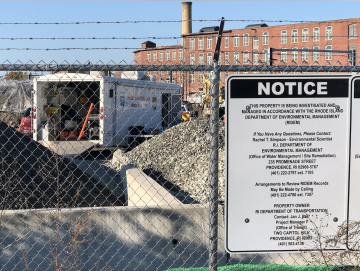 From 2015 to 2019, RIDEM issued just $4,519,831 in penalties for illegal disposal of hazardous and solid waste, water pollution and/or pollution violations — but those penalties were riddled down to just $1,189,575 in collected fines.

Save the Bay, Rhode Island’s leading environmental organization, tells GoLocal, “The absence of enforcement not only compromises the environment, but it also represents a breakdown in the effort to deter future violations. Delayed or weak enforcement also frequently results in settlements that, in the end, do not fully protect the resource that was degraded by the original violation. Protecting Narragansett Bay, the water we drink and the air we breathe requires vigorous, timely enforcement.”

As GoLocal reported in October, under RIDEM Director Janet Coit, the Office of Criminal Investigation was folded into the agency’s Enforcement Division — a group that is responsible for enforcing hunting and fishing regulations.

The agency defends the consolidation. 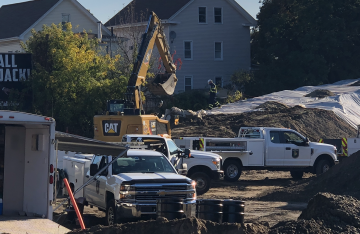 “In recent decades, we have observed a significant decrease in the funding and resources allocated to DEM. The department has reduced both the number of formal enforcement actions and the frequency and amount of penalties associated with violating the laws that protect our natural resources and public health. Generally speaking, diminished and delayed enforcement has serious consequences,” Save the Bay told GoLocal.

The non-profit Public Employees for Environmental Responsibility charges that RIDEM has failed to enforce the Clean Water Act.

“One of Rhode Island’s picturesque waterfronts appears to have a chronic sewage problem requiring immediate enforcement action, according to a complaint filed today by Public Employees for Environmental Responsibility (PEER). Citing months of state inaction on citizen complaints, the group is asking the U.S. Environmental Protection Agency (EPA) to intervene,” said the group in a statement.

“In 2008, a PEER complaint prompted the Rhode Island Department of Environmental Management (DEM) to assess $40,000 in fines against the Sakonnet Point Club, a seaside social club, and its construction contractor due to illegal discharges of pollution into shellfish habitat, but in recent months DEM has remained largely unresponsive to numerous citizen reports, as well as some of the water sampling laboratory results. The Clean Water Act allows EPA to step in to take enforcement action where the state has shirked its responsibilities,” said the group.

“The evidence of discharges is clear, but requires official investigation and follow-up to be meaningful,” said New England PEER Director Kyla Bennett, a scientist and attorney formerly with EPA. “Rhode Island is administering the Clean Water Act through a delegation from EPA premised on the state providing comparable pollution protection, but DEM is no longer meeting this elementary standard.”

A new coalition of 15 groups in Providence called the “Fix the 6/10 Coalition” issued a statement in mid-October on the contamination at the RIDOT project site — and are calling for the project to be closed until a full environmental assessment can be conducted.

“We the Fix the 6/10 Coalition call on the Governor and RIDOT to immediately halt construction to assess the public health impacts of this hazardous material on our communities. We ask that our leaders prioritize the health and safety of our residents, above all else, in this and future highway projects,” said the 6/10 Coalition.

Neither Raimondo nor RIDOT Director Peter Alviti responded to the group’s letter.

Regulators and AG Defend Their Policies

Michael Healey, spokeperson for the RI DEM says the agency has changed over time.

“How environmental regulators practice compliance and the relationship between regulators and regulated parties have changed considerably in the past 20 years,” he said. “Then we had widescale industrial polluting that required almost immediate enforcement and resulted in significant penalties. There will always be parties that violate environmental laws for economic advantage; however, now, companies and individuals are more aware of environmental protection laws and many companies have policies in place to prevent noncompliance or quickly correct noncompliance when it does occur.”

Healey said that he could not answer questions about the contaminated soil piled high next to families in Providence, as that is part of an ongoing investigation. That material has been stacked to nearly the second floor windows of abbutters for nearly six months.

“DEM’s policy is to provide parties an opportunity to correct noncompliance through informal enforcement unless criminal conduct is suspected or circumstances justify an immediate compliance order or a formal enforcement action. As always, DEM aims to respond to violations in a timely, fair, predictable way and proportionate to the scope, duration, significance, willfulness, and economic advantage gained by noncompliance,” Healey added.

Neronha’s office said in a statement, “The important work by the Attorney General’s Environmental Unit is time-consuming but our lawyers are persistent. That persistence is how a small group of attorneys was able to hold a global corporation like SIMS Metal Management accountable for its lack of compliance with our state’s environmental regulations. While that effort was one of our Office’s more noteworthy achievements – resulting in the largest penalty against a metal shredder ever assessed for violations of Rhode Island’s Clean Air Act – our team is working hard every day to protect the environment here in Rhode Island.”

“As you are aware, our climate change lawsuit against 21 major fossil fuel companies, seeking to hold those companies liable for knowingly contributing to climate change, remains ongoing. We also continue to litigate Rhode Island v. Atlantic Richfield, et al, which seeks to hold gasoline manufacturers liable for the groundwater contamination arising from the use of MTBE and the resulting expensive cleanup,” the office stated.