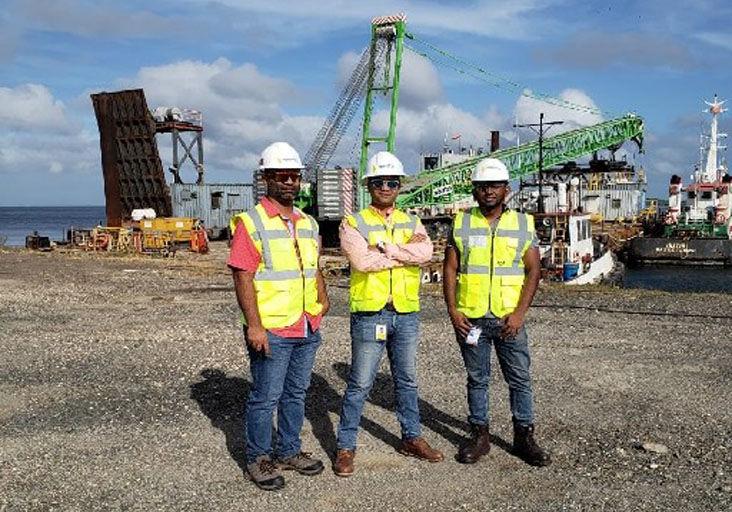 Not content with just being a successful family-operated brokerage business based in Cunupia, Trinidad, the company went into Guyana.

This was pre-oil Guyana—the investor-wary, Caricom country in South America that had haemorrhaged human capital over time—with its political fractiousness and its limited growth prospects.

It was one of Ramps’ “high-risk” investments.

The company had broadened from brokerage to logistics when the management passed on from Ramnarine Rampersad to his son, Shaun, who is now chief operating officer at the company.

The younger Rampersad, flush with ambition, was eager to expand the family company having tested “risky” businesses in Haiti and turned a profit.

So Ramps set up shop the year before US-based ExxonMobil started to drill its first well, Liza 1, in 2015.

“It was about being in the right place at the right time,” Rampersad, 39, told Express Business in an interview at his office a few weeks ago.

“We were one of the few companies with oil and gas experience at the time. Guyana was an unknown entity. The first time someone tried shipping something to Guyana, it went to Ghana. People just didn’t know. Even when Exxon came, there was a 10-20 per cent chance of oil but we knew it was our chance to shine. We put all our best resources on it,” he recalled.

Following the success of the first well, Rampersad said the company got the opportunity to bid internationally for the Exxon logistics contract, which it won.

Since then, Guyana has changed.

On the energy front, there have been 16 oil finds by ExxonMobil and Tullow Oil since 2015.

In fact, according to the trade publication Petroleum Argus, Exxon now expects to produce more than 750,000 barrels of oil a day offshore of Guyana by 2025, a figure equivalent to 20 per cent of the company’s present global oil and gas production.

On the political front, Guyana is expected to hold elections on March 2, 2020.

On the economic front, Guyana is seen as the place in the Caribbean to do business with several Trinidadian companies seeking to sell their services.

But Ramps was a pioneer.

Just as Guyana’s financial prospects have grown, Ramps is reaping the rewards for taking the risk.

The Exxon logistics contract was the ticket that paved the way for more opportunities locally and internationally.

Rampersad pointed out that Shell gave it an opportunity when it was invited to bid on a contract.

While he did not win, he said the feedback was good and they were invited to bid again on a smaller contract which they won.

The company has received accolades for its work, copping the Trinidad and Tobago Manufacturers’ Association Supplier of Services this year and the award for Exporter of the Year in 2017 at the Energy Conference.

Last month, Rampersad, an industrial engineer, was selected to sit on the board of the Energy Chamber.

Vocal about business and local content, the seat has given him a platform. For instance, he doesn’t believe the Government should be a regulator and an operator of energy companies.

Choose one, he argued.

In Guyana and Suriname, Ramps offices act like a business hub for companies that want to break into those markets.

“We know the terrain, we are able to help people make connections. In fact, we act as a business development office as there is no consular support for companies who want to get in,” he said.

“We are all about building a brand and building relationships,” he said.

The company has grown; from 120 employees in 2012 it now employs 550 people and it now has offices in Suriname and Houston, Texas. Three months ago, Ramps opened an office in Mexico.

It has also set its sights on West Africa.

“We offer a full door-to-door experience,” he said.

But success is based on the talent the company has been able to attract.

And Rampersad explains the company goes out of its way to hire the best talent on the market. As a result, Ramps is seen as an attractive employer.

He acknowledged that when any position at the company is advertised, they get over 200 applications.

In fact, it has set up a research and development department with a group of scholars to give advice and feed into how the business can become more efficient.

“We don’t wear ties here,” and pointed to his orange-patterned flowered shirt and a darker orange pants he wore for the interview.

He is focused on developing a different culture.

“Leadership is about having smart people around you and space for them to speak openly. People need a space to confidently express their opinion. What then happens is that one plus one doesn’t just become two, in some cases its three and four. It becomes more. Because bringing smart people together, discussing, aligning, improves everybody,” he said.

To illustrate his point, he drew reference to Mark Loquan, president of the National Gas Company.

“I am confident in the future of the NGC because of Mark. Leadership is the single, most important factor in not just companies but in countries and families.”

He explained that young professionals in his company are allowed to work in any of Ramps office to build capacity.

“This is how you improve the quality of leadership and the leadership pool very quickly,” he said.

While he has his MBA, he said he learnt more about managing and engaging people by reading.

“I think all businesspeople should read Ben Horowitz, The Hard Thing about Hard Things. As a boss, reading is the best thing you can do. In fact, I love to travel because that’s when I get quiet time to read,” he said.