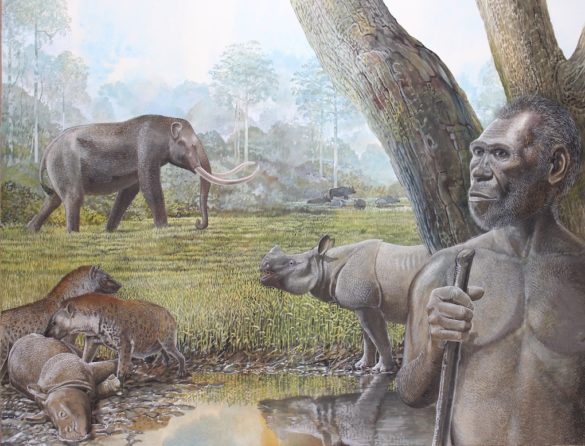 Artist’s reconstruction of a savannah in the Middle Pleistocene, Southeast Asia. In the foreground Homo erectus, stegodon, hyenas, and Asian rhinos are depicted. Water buffalo can be seen at the edge of a riparian forest in the background. Photo credit: Peter Schouten

Who or what is to blame for the demise of giant animal species and early humans that once roamed the landscapes of Southeast Asia?

Until now, theories have suggested that people, climate change or both led to the extinction of such species as the massive ape Gigantopithecus, elephant-like stegodons and large water buffaloes.

New research findings published in Nature indicate that it was actually the rise of forests and the fall of  savannah environments that made these species and some human ancestors disappear.

Scientists from the Australian Research Centre for Human Evolution and Germany’s Max Planck Institute for the Science of Human History (MPI-SHH) studied the chemical composition of fossil mammal teeth from throughout the Pleistocene — over the last 2.6 million years — to find out what animals ate.

They wanted to find out if they primarily ate tropical grasses or leaves and to learn more about what the climate was like at the time. They also examined more than 250 new measurements of modern Southeast Asian mammals.

“Southeast Asia is often overlooked in global discussions of megafauna extinctions, but in fact it once had a much richer mammal community full of giants that are now all extinct,” said Julien Louys, associate professor at Griffith University.

The researchers learned that that rainforests dominated in the area from present-day Myanmar to Indonesia in the early part of the Pleistocene, but subsequently gave way to grassland environments. These savannahs, which were at their zenith about a million years ago, generated the proliferation of grazing megafauna. These animals provided meat for ancestral relatives, including Homo erectus, Homo floresiensis, Homo luzonensis and the Denisovans, who were common throughout Southeast Asia.

As savannahs became more common, some of the large forest-adapted animals became extinct in parts of Southeast Asia. But around 100,000 years ago, dense tropical canopies began to return, supporting the fauna found in rainforests today.

“We see a correlation between the losses of these savannah environments and the loss of various Southeast Asian megafauna,” Louys said. “Modelling of major climatic systems from around this time suggest it was the changes in the length and duration of ice-ages that led to a resurgence of rainforest, to which the megafauna was poorly adapted.”

The ascendency of rainforest-adapted species coincided with Homo sapiens.

“It is only our species, Homo sapiens, that appears to have had the required skills to successfully exploit and thrive in rainforest environments,” said Patrick Roberts, research group leader at MPI-SHH.

“All other hominin species were apparently unable to adapt to these dynamic, extreme environments.”

Ironically, rainforest megafauna are now most at risk of extinction, with many remaining species critically endangered throughout the region as a result of the sole surviving hominin in the region, Louys said.

“Rather than benefitting from the expansion of rainforests over the last few thousand years, Southeast Asian mammals are under unprecedented threat from the actions of humans,” Professor Louys said.

“By expanding out into vast tracts of rainforest, causing deforestation and overhunting, we’re at risk of losing some of the last megafauna still walking the Earth.”

Copyright policy:
We want you to share Forests News content, which is licensed under Creative Commons Attribution-NonCommercial-ShareAlike 4.0 International (CC BY-NC-SA 4.0). This means you are free to redistribute our material for non-commercial purposes. All we ask is that you give Forests News appropriate credit and link to the original Forests News content, indicate if changes were made, and distribute your contributions under the same Creative Commons license. You must notify Forests News if you repost, reprint or reuse our materials by contacting forestsnews@cgiar.org.
previous post