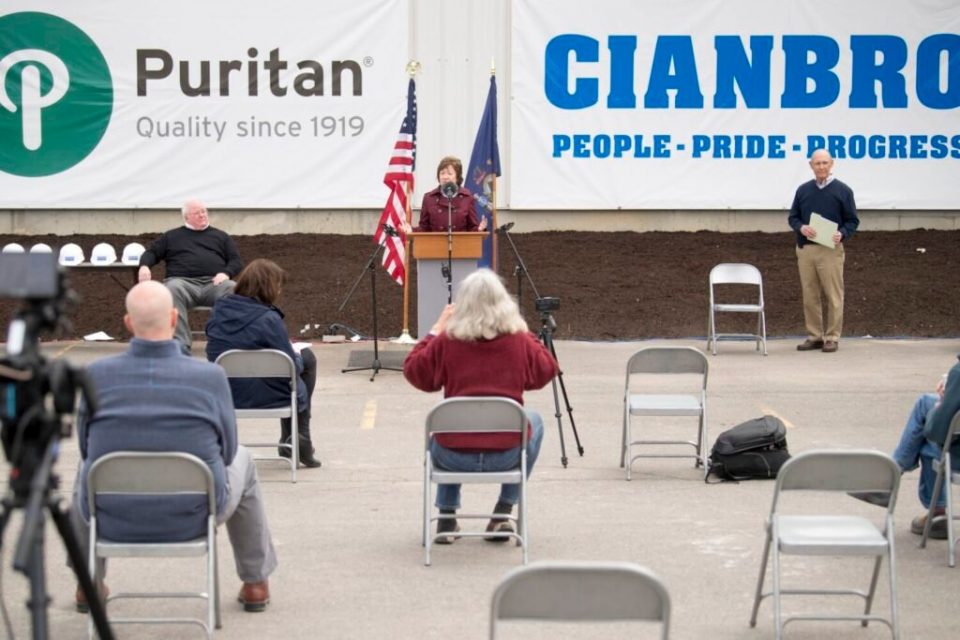 PITTSFIELD — Cianbro Corp., Puritan Medical Products and U.S. Sen. Susan Collins, R-Maine, announced Monday that $51.2 million in CARES Act funding is being used to develop a second major factory in Pittsfield that will increase the manufacture of COVID-19 testing swabs by millions per month and create more than 200 jobs for Puritan.

Cianbro is working with Puritan to rebuild the former San Antonio Shoe site at 206 SAS Drive for the facility, which is expected to produce 50 million swabs per month.

In addition to its Guilford manufacturing site, Puritan developed its first swab manufacturing plant in Pittsfield earlier this year at 129 North Main St. in Pittsfield. It produces 40 million swabs a month and is expected to be producing 90 million a month by Nov. 15.

The 100,000-square-foot facility on North Main Street enabled Puritan to create more than 400 jobs. It utilized 743 construction workers and 66 subcontracting companies before it began making swabs May 1.

The 78,840-square-foot facility on SAS Drive is expected to create more than 200 jobs for Puritan, employ more than 650 construction workers and utilize about 50 subcontractors. The facility is expected to begin producing swabs Jan. 1, 2021.

“Let me tell you that I believe that this is a momentous occasion and a celebration for us all, and particularly the town of Pittsfield,” Peter Vigue, chairman of the board of directors for Cianbro Companies, told about 70 people who attended Monday’s outdoor event at 206 SAS Drive.

He said developing the second factory in Pittsfield would not be possible without the generosity of Lisa Armstrong and Cheryl Remmert, the daughters of Maine native Terry Armstrong, who co-founded San Antonio Shoemakers in Texas and later returned to Maine to continue making shoes. The sisters donated the former shoe buildings and about 29 acres to the Pittsfield Development Corp. which donated the buildings and about 11 acres of the land to Puritan. An old, adjacent three-story brick building will be demolished.

Puritan, one of only two major manufacturers of COVID-19 testing swabs in the world, partnered earlier this year with the federal government and Cianbro to develop the first swab making facility in Pittsfield as part of a $75.5 million federal grant.

Collins spoke in April at the announcement of plans for that North Main Street facility. Vigue said Monday that Collins has been tireless in supporting the projects. In turn, Collins, a key negotiator of the CARES Act, on Monday recognized Vigue for his leadership.

“I’m delighted to be here again to  recognize two outstanding Maine companies — Cianbro and Puritan Medical Products,” she said. “They have helped us to meet a national challenge and that is providing testing supplies as we deal with this Covid-19 pandemic.”

She thanked Armstrong and Remmert for donating the buildings and land for expansion of swab manufacturing.

“As Peter said, this project is a fitting tribute to their father, Terry Armstrong, a Mainer of uncommon generosity,” Collins said.

The projects help to counter the economic harm caused by the pandemic, according to Collins, who said they create hundreds of manufacturing and construction jobs.

Pittsfield Mayor Heather Donahue welcomed Collins and others and said it was an exciting day for the town.

“We’re very proud to be part of Puritan’s expansion and we welcome you to Pittsfield once again,” she said. “Thank you.”

John Cartwright, general partner of Puritan, said that for 130 years, the manufacturing buildings on SAS Drive provided for the families in the Pittsfield area when they were the site of woolen and shoe factories and will continue to do so manufacturing supplies for the healthcare industry. He thanked Armstrong and Remmert for donating the buildings and property.

“The transfer of these buildings from the Economic Development Corporation allows Puritan to quickly build and begin producing additional medical swabs needed so urgently by our country,” Cartwright said.

Timothy Templet, Cartwright’s cousin and partner in Puritan who also is executive vice president of the company, said that by Nov. 15, the North Main Street facility developed earlier this year will be producing 90 million swabs a month.

“I had no idea this would take place, but here we are again,” he said. “It’s been a great ride for us, and we will continue to work hard to produce for America and the world.”

Lisa Armstrong said she and her sister were making the donation in their father’s name. He died in 2005.

“This is great news, not only for the town of Pittsfield but the state of Maine and our country,” she said. “Our father would be so proud.”

Remmert recognized Puritan and Cianbro, particularly Vigue, in the effort.

“His enthusiasm and can-do attitude is remarkable,” she said.

“The fact is that there’s not been a Supreme Court justice confirmed in a presidential election year since 1932 and that precedence was reaffirmed four years ago,” Collins said. “I think in the interest of fairness that we should be following the same rules.”

After Mounting Criticism, Tesla Will Shut Down California Factory

Data Warehousing Market Analysis and the Impact of COVID-19 Key Vendors, Growth Rate and Forecast To 2028