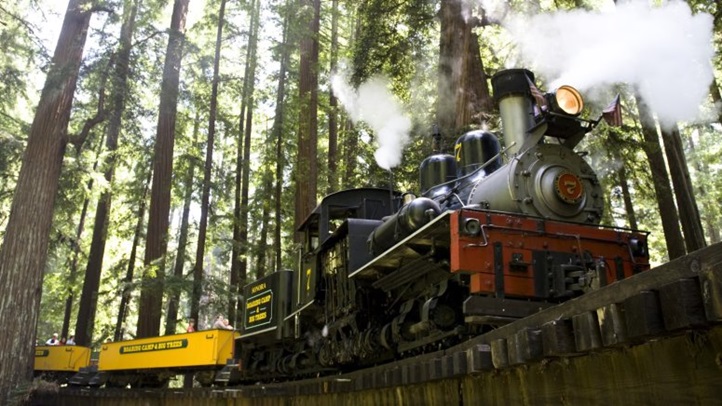 A dispute over the cost of rail line maintenance could threaten the future of Roaring Camp Inc.’s popular passenger trains, which run from the mountain community of Felton through redwood forest and 8 miles down to the Santa Cruz Beach Boardwalk.

Roaring Camp Railroads and the Santa Cruz County Regional Transportation Commission (RTC) have gone head to head over who bears responsibility for repairing the Santa Cruz Branch Rail Line, which runs from the Felton Branch down the coast to Watsonville and needs $50 million or more to fix two bridges and implement measures to address sea level rise and coastal erosion.

As a result of the impasse, the RTC is taking steps to change the way the railroad is regulated, which Roaring Camp officials fear could ultimately put it out of business.

“It is not fair that the RTC has not managed their asset and seeks to take the easy way out of their fiasco by coming after Roaring Camp,” said Melani Clark, Roaring Camp CEO.

The dispute will get a public airing Thursday at a virtual meeting of the commission, where a procedure called adverse abandonment of the rail line is scheduled for discussion.

Roaring Camp officials claim the abandonment would remove its right to use the line for freight use, which it calls “the first step in a larger, special interests-fueled effort to end rail service in Santa Cruz County.”

There is currently active freight on the Santa Cruz Branch line, but only on the first 3 miles within Watsonville city limits.

Preston said there has been no other freight since at least 2017 and no significant freight service since a Cemex plant closed in Davenport in 2010.

He insists the proposal would only affect current and potential future freight, adding that it has no plans to close the Roaring Camp passenger lines.

“As we gained information on the cost of repairing the rail line for freight and worked to find a new freight operator, it became apparent that the cost of maintaining the line for heavy freight was substantial,” Preston said.

Roaring Camp officials, however, are unconvinced by these assurances.

Clark notes that ending the right to move freight traffic would remove the line from federal jurisdiction, leaving it vulnerable to a Regional Transportation Commission that she says is under pressure to tear out rail in favor of bike trails.

“An attack on our freight rights is an attack on passenger rail,” she said. “Loss of our rights to freight service on the Felton Branch Rail Line will mean a loss of current federal protection of our line. Loss of federal protection will mean that our ability to reach the Boardwalk with our tourist trains will be entirely controlled by the RTC and subject to the whims of the current RTC board and leadership, as well as those of the future.”

Despite having had no freight service north of Watsonville for years, Clark says her company currently has multiple requests for freight service, including at the north end of the line in the Santa Cruz mountains. The company has been unable to meet those requests due to the maintenance situation, which she said prevents heavy freight trains from moving north out of Watsonville.

“It is frustrating, as well as ironic, that the RTC is citing lack of freight traffic on the line as a reason for abandonment, when the RTC itself has prevented Roaring Camp’s use of the line,” Clark said.

Roaring Camp has been asking its supporters to contact commission representatives before the Thursday meeting. Fire chiefs of the San Lorenzo Valley have also weighed in on the matter by issuing a letter to the RTC opposing the abandonment of freight service on the branch line, saying it is an essential artery connecting Santa Cruz County to the rest of California during fire emergencies.

“Fire trains use water and retardant, hauled by rail in tanker cars,” the letter reads. “The trains also include firefighting professionals who battle wildfires from the train, helping to protect watersheds and critical infrastructure.”

One possibility the RTC is reportedly considering is called “rail banking,” in which federally regulated freight rail lines proposed for abandonment can be preserved for future reactivation. Typically, rail banked tracks are removed so the railway road bed can be used for hiking or biking, but with the railroad company retaining an option for future restoration of freight rail should conditions permit.

“A full abandonment extinguishes the common carrier obligation on a line and removes the right-of-way from (federal) jurisdiction,” says Michael Booth, spokesperson for the U.S. Surface Transportation Board, which would weigh RTC recommendations in ultimately deciding the fate of Santa Cruz freight rail. “In contrast, discontinuance authority or “railbanking,” relieves the carrier from an obligation to provide service, but the carrier holds the right-of-way in reserve for potential future reactivation of rail service.”

But railbanking holds little appeal to Roaring Camp and its supporters. Once the rail line is deactivated, Clark doubts it will ever return.

“In the 40 years since railbanking was introduced, 25,000 miles of track has been pulled up and not one single mile has returned to rail service after being paved for a trail,” she said.

For his part, RTC’s Preston expresses some understanding of Roaring Camp’s concerns.

“What railroad would want to be disconnected from the main line?” he said.

But he added that the maintenance impasse leaves his agency’s hands tied, with a need to find an alternative solution.

What form that solution will take may become clearer at Thursday’s meeting.

US to extend travel restrictions to UK, Ireland due to coronavirus