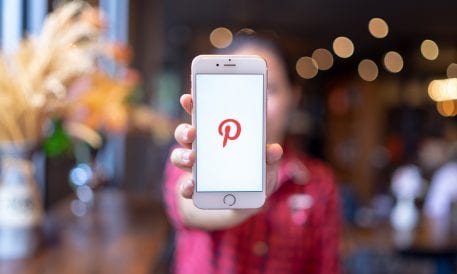 At a time when chaos and turmoil seem to have permeated everything from the pandemic to politics, social media sharing platform Pinterest is winning new advertisers large and small who are drawn to it as a haven of safety and positivity. While Facebook was never mentioned by name in Pinterest’s recent third-quarter earnings call, it’s no secret that some businesses are moving their brands away from places where boycotts and blowback have become increasingly common.

“We continued to benefit from marketers who are prioritizing positivity and brand safety,” Pinterest CFO Todd Morgenfeld told investors during the company’s earnings call last week. “Advertisers tell us that Pinterest is brand-safe relative to other consumer internet platforms, and we benefited from this in Q3.”

However, he added that it remains to be seen if the migratory trend will be sustainable, particularly after the U.S. presidential election. Still, Pinterest has made recent investments in technology and sales coverage. It’s also seeing a general uptick in media consumption due to the COVID era’s digital shift.

The arrival of some new advertisers to Pinterest helped results, but caught even the company by surprise. “We saw much more demand for our advertising services than we expected in Q3,” Pinterest President and CEO Ben Silbermann said of the third-quarter results.

In a direct bid to advertisers and users, Silbermann said the company has intentionally tried to make the platform engaging, useful and more shoppable.

Pinterest’s ascendancy and status as a safe haven for brands marks a stark contrast to what AdWeek referred to as Facebook’s summer of widespread boycotts related to its failure to curb hate speech on the platform.

At the same time, Pinterest has been able to fly under the radar of the Big Tech antitrust crusade that is currently percolating in Washington and Europe, putting pressure on Facebook.

That said, Facebook is hardly showing signs of distress, as it continues to grow and adapt its multimodal platform to attract businesses large and small.

To grow the commercial space, Facebook said it is integrating its WhatsApp business features with Facebook Shops to allow SMBs to establish a simultaneous commercial presence across Facebook, WhatsApp and Instagram. Zuckerberg also reiterated that the company was in the process of “making it easier for people to buy products directly within a chat.”

Whether it’s people spending more time at home, the return of 1990s styles or the growth of conscious consumption, Pinterest and its advertisers are serious about trend-watching, publishing and curating the Pinterest 100 list each year.

Morgenfeld said it’s a big part of the reason why advertisers – especially large CPG companies – are finding their way to Pinterest. Big clients included Hershey’s ahead of Halloween, Welch’s ahead of the back-to-school period and Miracle-Gro around the home gardening trend.

Additionally, the CEO said Pinterest saw an advertising rebound from large omnichannel retailers that had paused their spending in Q2.

“The notion that the commercial intent of our users translates into a leading indicator of where demand is going to go is really resonating,” he noted.

New forms of alternative credit and point-of-sale (POS) lending options like ‘buy now, pay later’ (BNPL) leverage the growing influence of payments choice on customer loyalty. Nearly 60 percent of consumers say such digital options now influence where and how they shop—especially touchless payments and robust, well-crafted ecommerce checkouts—so, merchants have a clear mandate: understand what has changed and adjust accordingly. Join PYMNTS CEO Karen Webster together with PayPal’s Greg Lisiewski, BigCommerce’s Mark Rosales, and Adore Me’s Camille Kress as they spotlight key findings from the new PYMNTS-PayPal study, “How We Shop” and map out faster, better pathways to a stronger recovery.

Obituaries: Having the final word

Sunday shows round-up: Bercow is being bullied by the government, Dawn Butler says