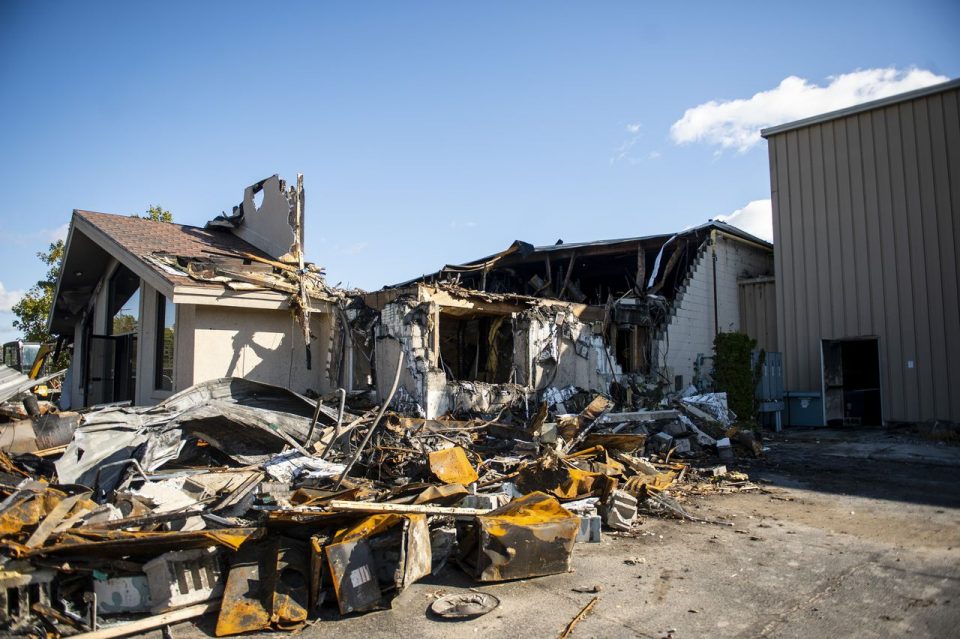 PINCONNING, MI — A weekend fire heavily damaged a pickle manufacturer and major employer in northern Bay County. An official with the company said Wednesday they are working to keep up with the demands of production and planning their next steps.

“We’d like to rebuild. We’re looking at it right now and we’ve got to see how devastating it is,” said Joseph Janicke, president of Bay View Foods and Mr. Chips Inc., located in Bay County’s Fraser Township, just south of Pinconning. “We’ve got to see what the economics of it is.”

Formed in 2000, Mr. Chips Inc. is a subsidiary of Bay View Foods and processes and packages pickle, pepper, and relish products, according to the company’s website. Joseph Janicke’s late father, Francis Janicke, founded the company in 1946.

With approximately 175 employees in the Pinconning area, about 150 of whom work for Mr. Chips, Bay View Foods is one of community’s largest employers. The city of Pinconning has a population of about 1,230.

Josh Klee, president of the Pinconning Linwood Area Chamber of Commerce, said in addition to being a major area employer, Bay View Foods/Mr. Chips is a longtime chamber member.

“In fact, they were the 2010 recipient of our Economic Development Award, for their diligent work in helping our community through the recession. They did so by expanding and bringing on more employees at a time when it was difficult for many business and people in our region,” Klee said. “Our community is deeply saddened by the fire. Our hearts go out to everyone impacted by this situation. We will continue to support this wonderful business in anyway possible during this challenging time.”

Firefighters responded to the structure fire at the facility, located at 2606 N. Huron Road (M-13), Saturday afternoon, Oct. 3. Joseph Janicke said the cause of the fire has yet to be determined, but flames were first spotted coming from an empty brine tank. The manufacturing facility is a total loss, but the company’s grading and brining operation was undamaged, he said.

“I think it was spray foam insulation in the roofline and once the flames hit that it just took right off, you couldn’t put it out,” he said.

It took more than 60 firefighters and 400,000 gallons of water to stop the blaze. Some nearby residents were evacuated for approximately two hours because of deteriorating air quality in the area.

“We are so thankful for all of our fire departments and volunteers that worked so hard to extinguish the fire and save this business. These men and women work tirelessly to protect our community and we are very grateful,” Klee said.

No one was injured as a result of the fire.

“That was the only good thing about the whole deal,” Janicke said.

For now, the company is shifting some of its production to its plant in Macon, Georgia, about 84 miles southeast of Atlanta, where they’re adding shifts in an effort to keep the company’s existing accounts, Janicke said.

“It’s just a matter of running that stronger than what we ran Michigan,” he said of the plant down South.

“They’re going to start running extra lines down there to at least help do some packaging for some of our customers that we have,” she said. “In fact, some left at 4:30 this morning to drive down, we’ve got more going this weekend. You know, we’re going to try our best to supply what we can. And other companies have reached out to co-pack for us as well, but we haven’t even crossed that path yet.”

Joseph Janicke said when it comes to the future of the site and next steps, there’s still a lot to learn and figure out. A Servpro crew was there Wednesday, Oct. 7, working on cleanup.

“The actual production facility is pretty well wiped right out, so it’s pretty bad,” he said of the damage. “After they get through there, we can evaluate if there’s much we can keep or not keep, and we’re looking at putting a temporary building up to maybe do a little of the manufacturing here so everything’s up in the air yet.”

Joseph and Sharon Janicke wished to thank the community for its support during this difficult time.

“We’ve got a great foundation with our employees and they’re just really digging in,” Sharon Janicke said. “Our hearts break for the families…look at the 175 families up there, you know, that count on us. So we’re going to work as quickly and efficiently as we can to get this resolved.”

Her husband added, “I’ve had a lot of support from a lot of people around and I appreciate all of them, thank you.”

Losing my garment factory job due to Covid-19 [Video]