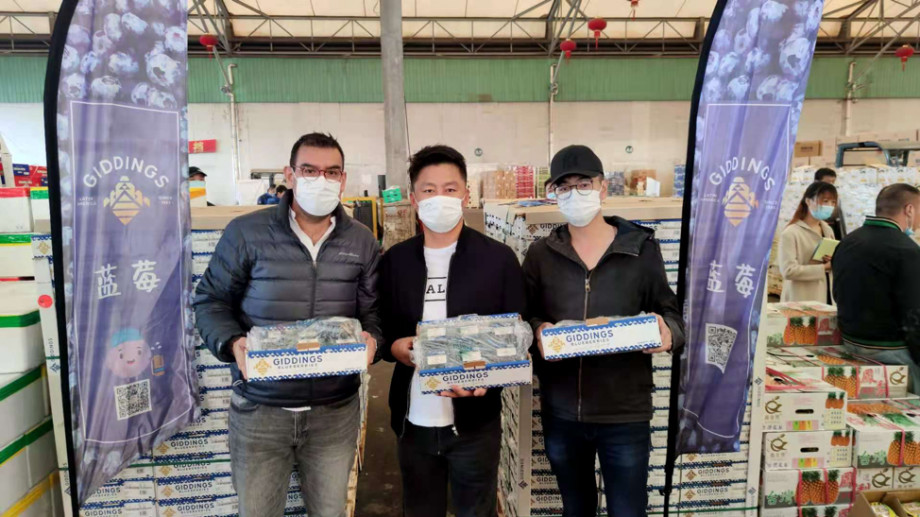 Previously, both Giddings Fruit and have engaged Pengsheng in a business model which aimed to position the brand within Chinese consumers by airfreight until seafreighted blueberries arrived to the market. During this period the air fruit was mainly sold at premium retail outlets such Ole, Citysuper and Rain Dew.

“Pengsheng and Giddings have been working together for many years now,” Deng said.

“Our relationship has been strengthening and our business come together towards a mutual path of trust and mutual development. This year we did several weeks of air shipments from Giddings, with excellent results.”

“We believe that the fruit will have positive feedback in the market, due to its flavour,” said Matamala.

“Moreover, we have started seeing an upside trend in prices of blueberries in the Chinese market, due to fewer volumes, so this fruit arrives at right moment of time.”

While the US still remains the main destination for Chilean blueberry exports, however, exports to Asia grew 20 per cent last season. This should be bolstered again this season with Chile forecasting a 155,000-tonne crop, up 2 per cent from last season.

To ensure these blueberries reach consumers as safely as possible Matamala said Chilean exporters have worked closely with Chilean and Chinese authorities to establish a protocol of safety for the workers at orchards, packhouses and offices in order to comply with the highest standards of safety and provide a Covid-19-free assurance.

“Customers in China can trust we are doing all the efforts to provide the safest fruits to your homes,” Matamala said.

Energy market braces for IMO 2020 as analysts warn of uncertainty