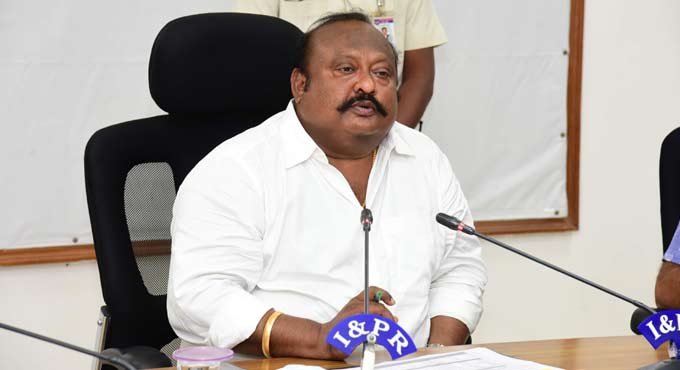 Minister Gangula Kamalakar instructed officials to make all arrangements at paddy procurement centres to ensure the farmers do not face any problems at PPCs.

Jagtial: BC Welfare and Civil Supplies Minister Gangula Kamalakar stated that procuring the entire paddy crop by providing minimum support price (MSP) to farmers was the top priority of the State government.

Speaking at a review meeting along with Welfare Minister Koppula Eashwar here on Friday, Kamalakar instructed officials to make all arrangements at paddy procurement centres to ensure the farmers do not face any problems at PPCs.

In the united Andhra Pradesh, farmers used to cultivate crops in only half of the areas due to lack of irrigation facility and irregular current supply. If a farmer holds ten acres of land, he used to cultivate crops in only five acres and remaining land would have left without cultivation. However, the situation has changed after the formation of Telangana State. Farmers have been cultivating their entire agricultural lands since all the water bodies were filled by completing irrigation projects and 24-hour uninterrupted power is being supplied to the agriculture sector, he noted.

As a result, there was a three times jump in production of paddy. Though the production enhanced, there was no change in infrastructure such as milling, storage and transportation. So, some problems were developed, the Minister admitted. Based on the instructions from the Chief Minister, he decided to carry out field level visits to know grassroots level problems. Kamalakar wanted the entire government machinery including Revenue and Police departments to be in the field for the next two months and complete the procurement process in a peaceful manner.

He also instructed the officials to coordinate with MLAs and other public representatives for smooth flow of the procurement of the crop.

Charlotte Symphony Adds Six New Members to Board of Directors

Disability Inclusion Must Be Integrated Into Business Supply Chain To Achieve SDGs, The Valuable 500 Head Says