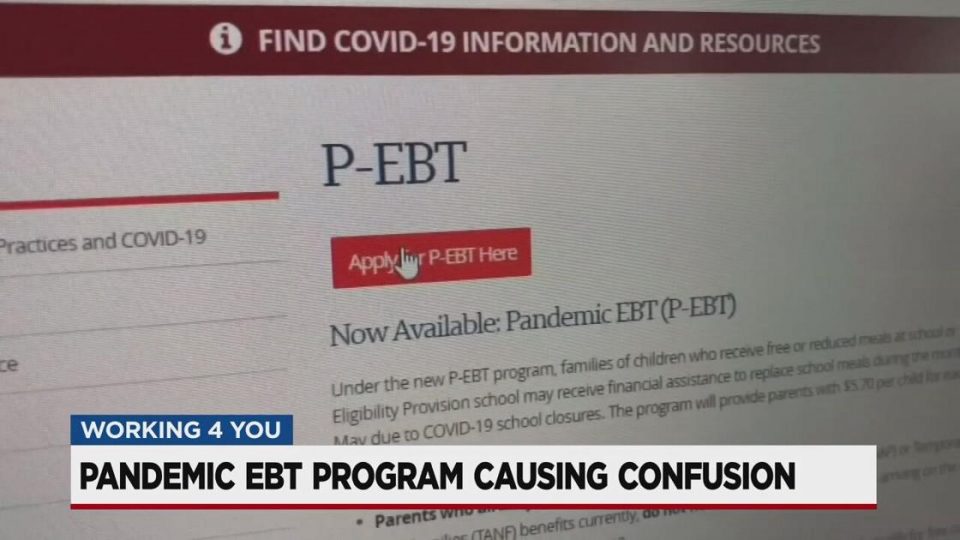 NASHVILLE, TN (WSMV) – The Pandemic-EBT or P-EBT is a federally funded program to make sure all children eligible for free or reduced breakfast or lunch through school, are getting fed during the pandemic.

Since school initially let out in March, the first round of P-EBT covered March through May when kids would have been in school. That happened after the USDA approved the P-EBT program be administered by the Department of Human Services to monetarily replace the meals not provided to the children. $5.70 for each meal they would have received during the time in which they were in school.

For that first phase, DHS required an application process for students to receive the benefit. Once that period closed, they sent about 244,000 cards to the schools for the known students eligible for the program who didn’t apply.

DHS Commissioner Danielle Barnes said Tuesday during the Governor’s COVID-19 press briefing that she was proud and pleased with how the department administered the benefit. “I think every state is still trying to figure it out, but I do say Tennessee is receiving national attention for how we have administered this program,” she said.

She went on to address the 30-day deadline DHS self-imposed on the schools, saying she had been very clear about operating the program with integrity.

Barnes said, “We can’t have cards just lingering out in the universe with money on them for an indefinite amount of time. So, we know for the three months application period, the time we’ve given with our advocates, as well as the additional time for the schools and the schools outreach, we believe that we can touch every family that’s available.”

Mary Kathryn Harcombe, who is the Executive Director with TIRRC, said not only is giving a deadline a problem but she doesn’t think the reasoning behind doesn’t add up.

“DHS repeatedly says ‘Well, we’re trying to prevent fraud,’ which is frustrating because it doesn’t make a lot of sense. First of all, this is food aid. This is money loaded onto a card that can only be spent for approved food items at and approved grocery store. Secondly, its federal money so if the money doesn’t get used, it just doesn’t come to Tennessee. But there’s no loss to Tennessee. This is not money that Tennessee could divert and spend elsewhere. Thirdly, there’s really no evidence or indication that there’s been fraud or loss in this money. I think everybody would agree there’s a lot of struggling families in Tennessee so it’s really unclear why DHS keeps saying we have to do all these restrictions for fraud,” said Harcombe.

She is so passionate about the P-EBT because she calls the benefit the “broadest and most inclusive” food providing program for children in Tennessee. Harcombe points out that it reaches children no matter immigration status or family structure, and it’s vital for getting food to hungry children.

Harcombe commented, “Families who have been without work have exhausted their savings…the pandemic is going into a third wave, so things are closing down again or people are losing their job again. We’re coming up on a perfect storm of just financial crises for families across the state and right at the time of Thanksgiving and Christmas when there are more costs and more food, we want to share with everybody.”

She believes the 30-day deadline schools have on distributing the cards should be extended with even the cards themselves going out in waves for each school. “If the school itself gets several batches of cards then the 30-day periods are different for each batch of cards. So, there isn’t even one final date that we can spread the word about and say ‘You have to go get it before this date.’ It’s really complicated. Families don’t necessarily know when they have to get it.”

Instead of sending the cards to the schools for the second round of benefit for July through September, DHS mailed those cards directly to the students.

SHELBYVILLE, TN (WSMV) – Many people are struggling right now. It’s what prompted one man to…

As of Tuesday, and another request for comment on Thursday, Commissioner Barnes stands by there is no need for an extension. She said, “I don’t think a universal extension is appropriate, however, as I mentioned, if a school is having a particular issue, they can reach out to us and we can work with them.”

News4 reached out to a few school districts to see how they are handling the process of distributing the P-EBT.

MNPS Spokesperson Sean Braisted said in part, “While it has added another layer of complexity for school teams in an already challenging year to be given this task with little notice and a tight timeline by DHS, our schools have been working to notify families through callouts, emails, or other forms of direct contact that these cards were delivered and available to be picked up because they understand the benefit this will have for the families they serve. Some schools have also been able to mail these cards directly to families as well. Additionally, the fact that DHS is directly mailing cards for round 2, but asking schools to distribute cards for round 1, has been a bit confusing for some families.”

DHS said they are still in the process of logging how many cards have been distributed and how many have been returned.

WSMV.com is now with you on the go! Get the latest news updates and video, 4WARN weather forecast, weather radar, special investigative reports, sports headlines and much more from News4 Nashville.

Meet the advocates of using contracts to gauge economic health