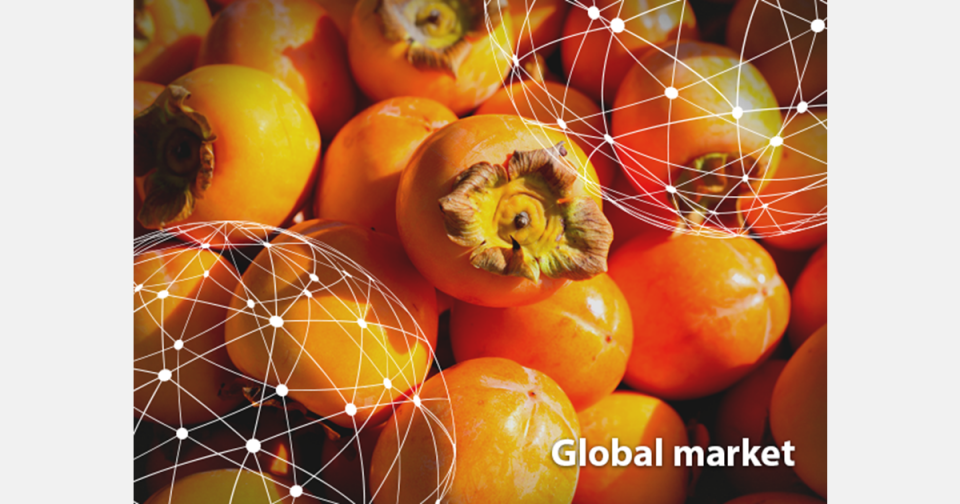 In September / October, the kaki harvest started again in the Northern Hemisphere. In recent days, the demand has been increasing, so traders have been obtaining good prices for the fruit. Prices are higher than last year almost everywhere, partly due to the production from Spain being strongly reduced. This was also necessary, given that Spanish growers had been getting very poor prices due to the record harvest. However, in Italy, sales of the domestic product are slow and prices are, on the contrary, showing a downward trend. Australian kakis were exported to Thailand for the first time this year. 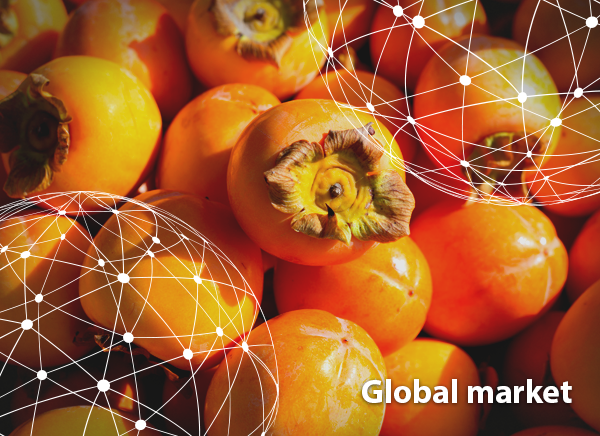 Spain: Substantial reduction in the harvest
The Spanish Rojo Brillante kaki season started in September. Last year’s disastrous commercial results, which coincided with a record harvest, caused the acreage to be reduced by about 6%. This year, the production volume has been significantly reduced due to the smaller harvest and the crops being affected in various ways by the increasing presence of pests in the region of Valencia, the main production area of ​​this fruit in Spain. This and the bad weather conditions, with storms and hail, has reduced the harvest this fall by up to 45% compared to the 450,000 tons harvested last year. The floods in Valencia two weeks ago caused volumes to drop even further, and the inability to enter the fields resulted in a noticeable drop in the supply, which was reflected in both higher demand and prices. In terms of quality, sizes are generally larger this year and, due to the storm damage, there is an abundance of second-class fruit.

While the prices received by producers are higher compared to the same period last season, the increase in pest control costs is taking a huge toll on profitability. In just a few campaigns, the number of pests that attack kaki crops has increased exponentially. The restriction on the use of phytosanitary products by government agencies means that pests such as the cotonet or whitefly, or fungi such as the Mycosphaerella continue to spread uncontrolled.

Netherlands: Prices on the rise
Rain showers in the Spanish production areas earlier this month caused considerable damage. Consequently, kaki prices have skyrocketed. “Last week, I sold them for 80/90 cents per kilo; now we have raised that to 1.20 / 1.25,” says a Dutch importer. “There is especially a lack of the small sizes that often go to supermarkets.”

Belgium: Increasing popularity of kakis in Belgium
The kaki season has just started. It is a product that is gaining popularity, but is not yet well known among Belgian consumers. According to a Belgian trader, kakis are mainly known by Belgians with an ethnic background. Various traders are trying to introduce more consumers to the product and this is bearing fruit in their sales. However, the supply is currently greater than the demand. Besides the fruit’s lack of popularity, the inconsistency in the quality and supply are also challenges for the product. If this problem could be tackled, a Belgian trader expects a bright future for kakis in Belgium.

Germany: Slight shortage of kakis
There is currently a slight shortage of Spanish kakis in the German market. “The volumes are about 30-40 percent lower than usual for this time of the year. This is of course noticeable in the trade,” said a wholesaler. They are now hoping for the market to become a bit more active again, as the season is not expected to last long. “I suspect the campaign will come to an end in about five weeks. As soon as the better citrus varieties hit the market in mid-December, kakis are usually quickly ignored.”

Switzerland: Organic kakis appear to be a gap in the market
In Switzerland, work has started for the first time this year with organic kakis from Greek producers. The driving force behind the project is the Gebana AG company, which is mostly oriented to consumers and smaller wholesale customers. In week 45, a test delivery of 240 packages of the Hana Fuyu variety arrived in Switzerland. This delivery was sold out in no time. “We are now looking at the feedback from our customers, and based on that we will decide whether to expand this product division in the coming year. There seems to be a demand for organic kakis, in any case,” says Gebana.

France: Sales are increasing towards Christmas
At the beginning of October, the first kakis from Spain started arriving in the French market. Although there has been a 20-25% reduction in the volume of kakis in Spain, this doesn’t appear to be having an impact in the French wholesale market of Rungis. Sales are quiet at the moment; however, the demand has increased over the last ten days. The average sales price is currently also higher than last year, with a price difference of approximately 0.30 Euro / kg.

Italy: Sales are slow and prices are falling
Although the kaki harvest is good in Italy, sales this year are disappointing. Retailers are not taking a lot of the Italian kakis and trade on the wholesale markets is also slow and with falling prices, according to a trader from Northern Italy. Kaki prices are also declining on the wholesale market in Campania. This trend started at the end of October; before that, the results were still satisfactory. The rainfall in recent days has made the situation worse, because the quality has deteriorated and the fruit’s shelf life has also decreased. This especially applies to Persimmon kakis. For the Kaki Vaniglia persimmon, the situation was completely disastrous, with prices not getting off the ground. The situation was not much better for the Rojo Brillante. Compared to the same period last year, prices have fallen by 10%. Kaki sales are much better in central Italy.

In Sicily, the Kaki Mela persimmon will continue to be produced until the end of December. The sizes are small this year compared to the Spanish competitor, but the taste is good and the quality consistent. This also applies to the Rojo Brillante that is grown in Calabria. The prices for the Sicilian fruit paid by supermarkets now stand at 1.20 Euro / kg. In the wholesale market, they amount to 0.85-0.90 Euro / kg.

United States: Demand slightly stronger compared to last year
California is currently in the peak of the kaki season, with a bountiful harvest of the Hachiya and Fuyu varieties, mainly from the Central Valley. The yield this year is comparable to that of the 2019 season and a wide range of sizes is available. The growers notice that the demand on the market is good. After all, it is a type of fruit that mainly goes to the retail. The demand therefore appears to be a bit stronger than last season, according to some traders. Prices are comparable to last year and are expected to remain stable, weather permitting.

Canada: Consumption of Spanish kakis on the rise
In the Canadian market, Rojo Brilliante kakis are imported from Spain. This year, imports started earlier than usual, at the beginning of October, instead of at the end of the month. The season ends at the end of December; however, some importers in Canada use chambers that allow them to extend the season until January or February. The demand for kakis in Canada is higher than last year and the distribution channels are absorbing the early season supply well. “The fruit’s becoming more mainstream and we see that reflected in its sales,” said a Quebec importer. The higher demand is the result of promotions and advertising campaigns carried out in Canada to promote the Spanish fruit. Packs containing several kakis are currently selling well on the market. However, a price increase is expected as a result of the measures to contain the coronavirus in the country. After all, the warehouses cannot operate at full capacity and that will be reflected in the price. The price is expected to rise in the coming days.

Egypt: Very few exports
This year, there will be no exports of Egyptian kakis to other markets. Many of the country’s orchards are aging, which means little yields. The kakis available are thus mainly intended for the domestic market. The little being exported is going to the Gulf States.

South Africa: No forecast possible yet
The South African season will not start again until April 2021. Three weeks ago, the flowering started again, but it is still too early to make a forecast for the next season based on that alone. The acreage in South Africa (crops located mostly in the Western Cape) remains stable and is not really expanding.

China: Slightly higher market prices compared to last season
The main kaki production region in China is Fuping, in the Shaanxi province, which has ideal conditions for the fruit’s cultivation. The total acreage stands at 6,667 hectares. However, the kakis from Fuping are mainly intended for drying and not to be consumed fresh. After all, fresh persimmons are not very popular among consumers in China. The price of kakis will be higher this year, although the market situation for fresh produce in China is currently better than it was in the first half of this year.

Australia: First shipment of kakis to Thailand
Australia remains a small producer of kakis, accounting for less than 1% of the world’s production. The season runs from the end of February to mid-June. According to the latest figures from Hort Innovation, the production has increased slightly (+3%) to 2,600 tons compared to last year. Earlier this year, Australia successfully exported its first shipment of kakis to Thailand under a new protocol. The shipment went by air freight on one of the few remaining flights to Bangkok. Due to the coronavirus, air traffic between the two countries has been significantly reduced. It was the first shipment of fresh produce from Australia to Thailand using chemical and heat-free phytosanitary irradiation. Persimmons Australia hopes that the success of this shipment will result in the protocol being extended to other states, as the fruit from this first shipment was sold out shortly after arrival.

New Zealand: Slight drop in kaki exports
Despite the challenges of the coronavirus, New Zealand kaki growers still managed to produce 1,200 tons in the 2020 season. This is just slightly lower than the 1,600 tons of the 2019 season. As for exports, New Zealand shipped 408 tons to Australia, 211 tons to Singapore, 162 tons to Thailand, 94 tons to Malaysia, 67 tons to Hong Kong, 59 tons to Canada and 28 tons to China. One of the biggest challenges for the industry in 2020 was the sharp increase in export taxes due to the coronavirus, with a strong switch to sea freight. The New Zealand Persimmon Industry Council says quality was still high throughout the season, although the weather caused sizes to be slightly smaller.

Is Seafreight Forwarding Market Really a Strong Market to Invest in? – Bulletin Line