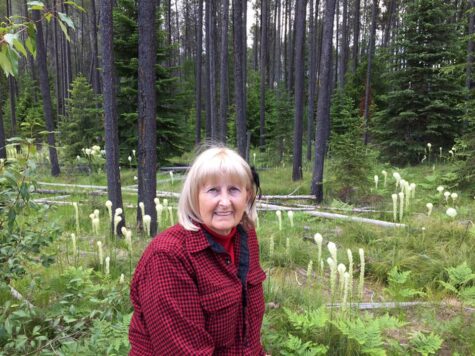 By Joey Macellaro ~ AN ACCOMPLISHED COMPETITIVE sailor, first responder, and beloved fixture in the Ocean Beach community, Gretchen Stang died last month at the age of 61 after a long illness.

A native of Babylon, Gretchen loved her family, and she loved to sail. As a young girl, she spent countless hours boating on the bay with her sister, Melodie; and her parents, Dianne and Glenn Schmidt. Gretchen grew to become an accomplished skipper in her own right, winning her first trophy with the Great South Bay Yacht Racing Association as a member of the Bay Shore Yacht Club in 1982. More than a dozen more wins followed, and Gretchen and her mother eventually took over management of the club’s racing program.

Worlds collided in 1996 when Gretchen married Mark Stang, also a Bay Shore Yacht Club member, and one of the most accomplished yacht racers on the Great South Bay. It was a match made in heaven as the couple began to sail together, and Mark worked with father-in-law Glenn on building the family’s boats of choice, Narrasketuck sloops. Gretchen settled with Mark into their longtime Ocean Beach home in 1998.

The Stangs were warm and welcoming to family, friends, and members of the community, and their home was a happy, laughter-filled place. Gretchen had affinity for local wildlife, and kept the local creatures well fed throughout the year. As year-round residents in Ocean Beach, they were ever present at community fundraisers and events. In spite of a cancer diagnosis earlier in 2019, friends were glad to see Gretchen singing carols around the tree at last year’s holiday lighting ceremony as she had many times before.

Always community-minded, Gretchen began working as an EMT for Bay Shore-Brightwaters Rescue Ambulance and Exchange Ambulance of the Islips in 2007, moving to the Ocean Beach Fire Department in 2010. She earned the title of EMS captain in Ocean Beach, stepping down from the life of EMS rescue only once she was no longer able to serve last year. In this capacity, Gretchen served her neighbors bravely and was a respected member of the department.

Gretchen volunteered her time with the Seaview Sailing Yacht Club as race committee chairperson and junior sailing chairperson, and served as the sailing program coordinator at the Bay Shore Yacht Club. She and Mark were also longtime members of the Free Union Church of Ocean Beach, which is grateful for their years of service to the congregation, and were involved in the Sayville United Methodist Church.

The Stangs worked together to manage Stang Carting, handling cross-bay freight transportation and carting services on the beach. Gretchen earned a bachelor’s degree in gerontology and a master’s degree in elementary education, both from Dowling College.

Gretchen loved to travel the world and often did so with Mark and his children, Rebecca and Justin. In addition to Mark, she is survived by her father and her sister- and brother-in-law, Melodie and Bob Linekin. She was predeceased by her mother in 2019. She will be sorely missed by all who knew her.

Atlas Air takes the lead in Project Airbridge (with video)