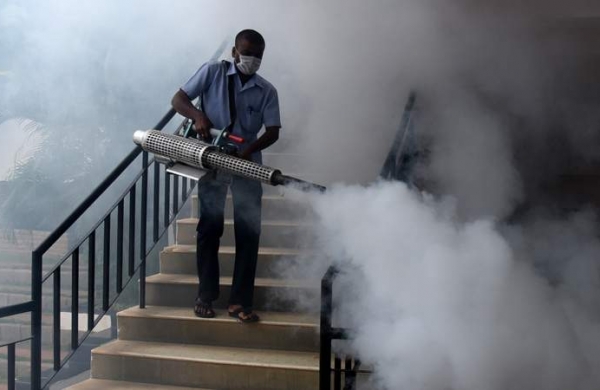 Every year, the rainy season sees the national capital menaced by vector-borne diseases, which have claimed many lives in recent times.

But in 2019, no death from these diseases has been reported so far.

The national capital’s battle against vector-borne diseases — chiefly dengue, malaria and chikungunya — appears to have been successful this year.

To Delhiites, the arrival of the monsoon brings with it the fear of contracting vector-borne diseases. For the authorities, especially the civic bodies, it is a major challenge, and they need to start making preparations before the rainy season to check the incidence of these diseases. However, despite the measures taken by the city, the period from July-end to November-end has seen dengue claiming lives every year in recent times.

However, this year, according to the state government, no death from vector-borne diseases has been reported so far in the national capital.

From almost epidemic proportions in 2015, when 60 people died of dengue in Delhi, to this year’s clean slate, the city seems to have learned to manage this seasonal menace. 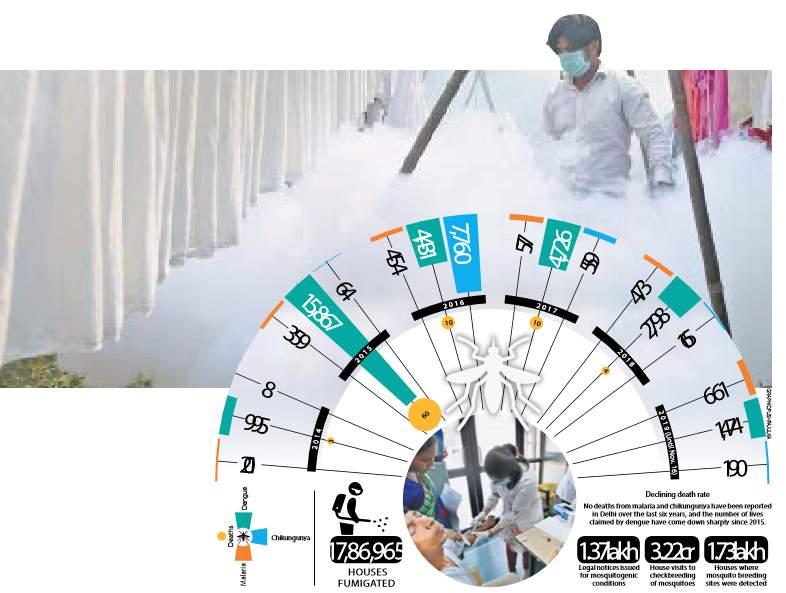 Why rains bring the dengue menace

According to Babita Bisht, who manages the vector-borne diseases programme in the North MCD, there is a clear link between dengue cases and climatic factors.

In a study she conducted on dengue and malaria cases in Delhi, she found that there was a need to develop a weather-based dengue forecasting model that will assist programme managers in forecasting and control measures and reduce the size of any outbreak, thereby decreasing disease transmission and any resultant mortality, leading to a reduction in the healthcare burden.

A health official from the MCD said that rainfall was a major factor in the breeding of mosquitoes in the city.

“This year the rainfall was less compared to earlier years, so mosquitoes did not get favourable conditions to breed and the numbers have remained low,” the health official from the civic body said.

When the season for vector-borne diseases was about to begin this year, the Delhi government launched a campaign against dengue that was led by Chief Minister Arvind Kejriwal himself.

Titled ’10 Hafte, 10 Baje, 10 Minute’, the campaign encouraged citizens to take responsibility for draining stagnant water and ensuring that mosquitoes were not breeding in their homes. Started on September 1, it continued for 10 weeks.

Last week, after it concluded, the CM claimed that it had been successful in controlling dengue in Delhi.
In a video message posted on Twitter, he said that this was an achievement in comparison to 2015, when more than 15,000 dengue cases were recorded and 60 people died of the disease.

“I want to congratulate Delhiites. We started a war against dengue 10 weeks back by starting a campaign. Today is the last Sunday under the campaign when we have to check our homes. We have won the battle against dengue,” Kejriwal said in the video.

A 24×7 control room was established at the headquarters of the Directorate General of Health Services to provide information and guidance on prevention and availability of treatment facilities for vector-borne diseases.

Private hospitals were asked to increase the number of beds for treatment of patients with dengue or malaria, and a ‘no refusal’ policy was adhered to by the hospitals, whereby they did not turn away any patient suffering from these diseases.

“The idea for the campaign came from public awareness ideas. Despite various medical measures, dengue occurs because the authorities work in their own ways and the people have no clue what is to be done, so we decided to reach out to the people. Unless people come on the ground and take initiatives, goals can’t be achieved,” said a top official from the health department of the Delhi government.

Additionally, workshops were held to sensitise doctors and polio coordinators regarding control and management of dengue.

“The campaign was successful because the people understood the need for such a programme, and the residents of Delhi have always been cooperative. The Delhi government established a dengue control cell to conduct activities related to dengue prevention. High-risk areas were identified and shared with local bodies to take necessary preventive measures in those areas,” the official added.

How effective was the campaign?

The Delhi government had earlier said that experts had warned of a likely dengue epidemic this year, and so the state government left no stone unturned in taking precautionary measures.

Praising the efforts of the state government, Chandrakant Lahariya, a public health specialist, said that it was a good strategy for increasing public awareness.

“In vector-borne diseases, prevention and control is the best approach. It was great initiative where the CM himself took up the matter and promoted the campaign. Therefore, automatically the flow of the campaign in lower authorities was more affective and had to be adhered to,” he said.

Lahariya noted that the campaign was launched at the beginning of the peak dengue season instead of waiting for a major breakout in the city.

“Had the campaign begun after there was any epidemic, it wouldn’t have made any impact because by then the damage would have been done. Usually campaigns against vector-borne diseases are under the MCDs, but the state government still highlighted the matter and they should be given credit for it,” he said.

What the three municipal bodies did

In Delhi, the groundwork against vector-borne diseases is done by the three civic bodies. The Domestic Breeding Checker (DBC) or DBC worker visits colonies, knocking on every door and checking for mosquito breeding points.

“Apart from that, the climatic condition didn’t favour mosquitoes this year as there was very little rainfall. Usually there is a three-year cycle for dengue and malaria cases, but that doesn’t happen now. Environmental conditions have changed totally,” the official noted.

Another official said that the civic bodies were strict about issuing challans this year, which made residents take the matter seriously, especially those living in slums and clustered colonies.

“The DBC workers have really worked hard. It is not easy for them. They are often put in uncomfortable situations and even went on strike because of salary issues. Yet the MCDs managed to get things done. The season for dengue and malaria is 90 per cent over,” stated the official.

While the number of dengue cases was relatively low this year, the figures for malaria and chikungunya rose compared to the previous years.

“This is because the central government is focusing on eradication of malaria by 2020. So a more intensive process was adopted and cases were traced by the MCD,” said another official.

However, the figures provided by the civic bodies don’t tally with those of the National Vector Borne Disease Control Programme, the central nodal agency for prevention and control of six vector-borne diseases — malaria, dengue, lymphatic filariasis, kala-azar, Japanese encephalitis and chikungunya.

“Many of the patients who visit hospitals in Delhi are from neighbouring states and cities such as Ghaziabad, Faridabad, Gurugram and Noida. While we at MCD count the figures for residents of Delhi, NVBDCP figures are based on overall patient visits in Delhi hospitals. That is why the numbers often vary,” the official noted.

‘Battle against dengue will continue’

Speaking on the state government’s success in controlling vector-borne diseases this year, Delhi health minister Satyendar Jain said on Sunday that the battle against dengue would continue and it would be made a bigger mass movement.

“Reduction in cases cannot be claimed as elimination. In Delhi, the fear of vector-borne diseases is not new, and our government always has the aim of not politicising health issues so that an elected government can serve its one and only purpose,” Jain told this newspaper.

Speaking on the health department’s planning this year for vector-borne diseases, the minister said the focus was on measures to prevent breeding of mosquitoes.

“We wanted to differ from the countrywide trend of increasing dengue incidence. For that we are looking ahead to more multi-stakeholder participation throughout the prevention-cure spectrum,” Jain said.

Acquisition of 100% of Covage by SFR FTTH