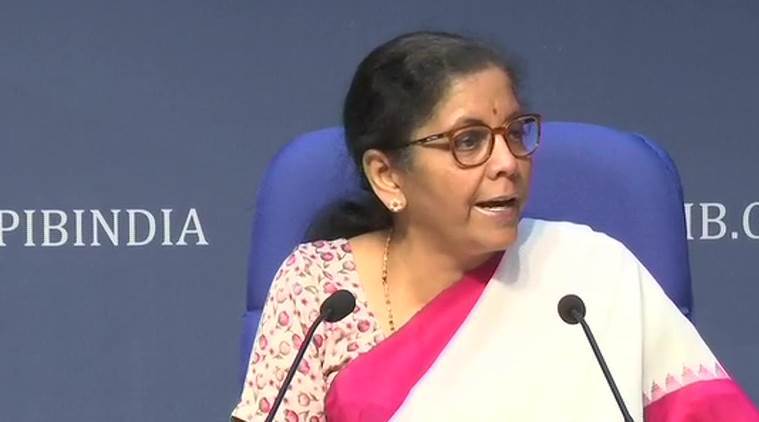 Addressing her fourth press conference in as many days, Sitharaman said that Saturday’s announcements would be on structural reforms. She said that the country needs to be ready for stiff competition in the global market so as to become self-reliant.

— The minister said that there are many sectors which need policy simplifications, adding that the prime minister has very good track record in taking strong, systemic reforms.

— Nirmala Sitharaman said that the government are bringing in commercial mining in the country’s coal sector. The government monopoly in coal mining is going to be removed. This, she said, will be done on the basis of a revenue-sharing mechanism instead of regime of a fixed rupee per tonne. She said that any company can bid for a coal block and sell in the open market.

— The minister said that India has the third-largest coal availability within its untapped mines and yet India still imports coal. Because of this the emerging sectors suffer because of lack of raw material availability. Sitharaman said that regulations are required when there is a shortage. But she stressed that India has abundant coal. Separately she said that coalbed methane will also be auctioned. Rs 50,000 crore for evacuation infrastructure is being provided, she added.

— The minsiter said that the sectoral reform they want to bring in is to give boost to the mining sector. So that they have a seamless composite exploration-cum-mining-cum-production regime. 500 mining blocks will be offered through a transparent and open auction mechanism.

–The finance minister said that the FDI limit in defence manufacturing under automatic route is being raised from 49 per cent to 74 per cent.

–The government will also begin time-bound defence procurement and faster decision making by setting up a Project Management Unit (PMU) to support contract management. It will ensure realistic setting of General Staff Qualitative Requirements of weapons/platforms and overhaul trial and testing procedures.

— The finance minister said the government will notify a list of weapons/platforms banned for imports, she said that such items can only be purchased from India. Every year this list will be increased. It will be done after consultation with the Department of Military Affairs. Sitharaman also said that a separate budget provisioning will be done for domestic capital procurement. This she said will help in reducing the defence import bill.

— Sitharaman said that only 60 per cent of India’s airspace is freely available and that we have been flying through most destinations through longer routes hence more fuel is used in the process and the customers end up paying more. The minister said that the restrictions on the utilisation of Indian airspace are going be eased so that the flying of civilian aircraft becomes more efficient. According to the minister, this will bring in benefits of nearly Rs 1,000 crore per year.

— Separately, the finance minister said that six more airports are now up for auction under the public-private-partnership (PPP) model. She said that additional investments are likely to happen in 12 airports for better world-class facilities. She said that the Airports Authority of India (AAI) will get a down payment of Rs 2,300 crore. The first and second round of investment in 12 airports will get Rs 13,000 crore.

— Nirmala Sitharaman said that power distribution companies in the union territories (UT) will be privatised. This she said will be in line with the tariff policy which is going to be announced soon. The tariff policy will have reforms, including consumer rights, promotion of industry and sustainability of the sector.

— The finance minister said that the government has made a provision of Rs 8,100 crore which will be through viability gap funding (VGF). With this, she expects to meet the urgent requirement for social infrastructure in India. In most projects supported by centre/states/statutory bodies, 20 per cent is given as VGF. The centre will give 30 per cent VGF, increasing the quantum by 10 per cent.

— Nirmala Sitharaman said that ISRO has done a lot of remarkable work in the space sector but now the private sector is also doing a lot of work in this area. The government wants the private sector to be a participant in the country’s space journey. She said that the government will provide a level playing field for private companies in satellites, launches and space-based services. They will be allowed to use ISRO’s facilities and other relevant assets to improve their capabilities. The minister said that future projects for planetary exploration and outer space travel will be open to the private sector. There will be a liberal geo-spatial data policy for providing remote-sensing data to tech-entrepreneurs.

The finance minister said that the government will establish a research reactor in the PPP model for the production of medical isotopes to promote the welfare of humanity through affordable treatment for cancer and other diseases. She also said that they will be establishing facilities under PPP mode to use irradiation technology for food preservation. This will complement agricultural reforms and assist farmers. The government will link India’s robust startup ecosystem to the nuclear sector to foster synergy between research facilities and tech entrepreneurs.

The minister’s announcements on Wednesday (day 1) included six measures for the MSME sector, two for EPF, two for NBFC and MFI sector, one for discoms, one for contractors, one for real estate sector, and three tax measures. On Thursday, Sitharaman said that migrant workers who do not have either central or state PDS cards would be given free food grain supply for the next two months among others. On Friday, she announced a total of 11 measures, of which eight were aimed towards building better capacities and allocation for ramping up storage and logistics. The remaining three were governance and administrative related reforms.

For all the latest Business News, download Indian Express App.