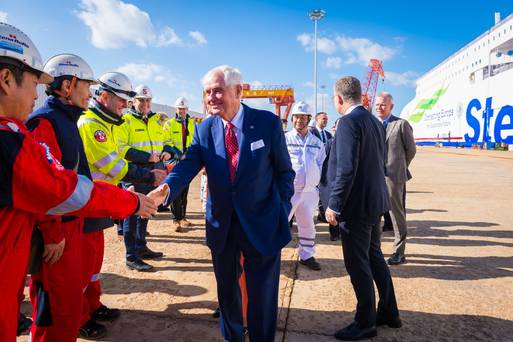 The Stena Estrid has been handed over formally at the Weihai shipyard to begin its approximately 10,000-nautical-mile (18,500km) journey to Dublin, a trip expected to take a month.

“Today has been six years in the planning,” said Stena technical operations director Bjarne Koitrand. “We are delighted to finally take ownership of the first of our five new ships. With the new crew now in place, they can start the long journey to the Irish Sea.”

It will replace the Stena Superfast X, a vessel capable of carrying more passengers but less freight.

Stena says the new design and capacity will allow 50pc more cargo to be transported per journey.

The vessel was officially handed over to Stena owner Dan Olsson as part of ceremonies that included a blessing of the ship by a Catholic priest flown in from Hong Kong.

The Weihai shipyard is contracted to build four more ferries for Stena, including two more earmarked for use on Irish Sea routes. The Stena Edda is expected to join the ferry company’s Belfast-Liverpool services by late 2020, the Stena Embla in 2021.

“Taking ownership of Stena Estrid is a major milestone for Stena Line,” said CEO Niclas Martensson, adding that its investment “will ultimately see three of the world’s most modern ferries operating between Ireland and Britain”.

“Stena Estrid will provide a more environmentally sustainable way to travel, with more efficient loading and unloading, increased freight capacity and the best Scandinavian quality, style and design in our facilities,” he said.

Stena Line operates 232 sailings weekly between Britain and Ireland, including Rosslare to Fishguard, and links to Cairnryan in Scotland and Heysham in England.

Tesla to Build Factory in Germany