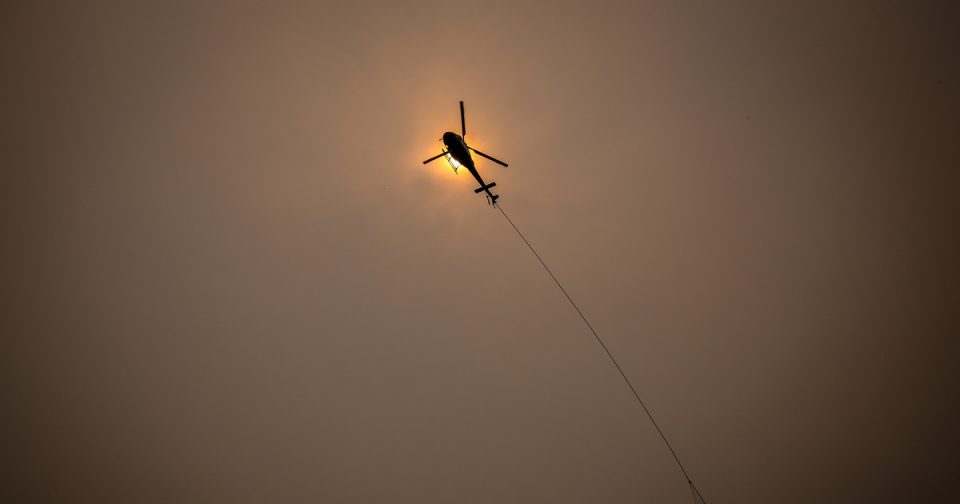 A helicopter carries water as it flies near the town of Bilpin, located west of Sydney in New South Wales, Australia, on Sunday, Dec. 29, 2019.
Photo: Bloomberg/Bloomberg via Getty Images

Right now, on the outskirts of a hyper modern first world megapolis, at the end of a year in which the public seemed finally to wake up to the dramatic threat from global warming, a climate disaster of unimaginable horror has been unfolding for almost two full months, and the rest of the world is hardly paying attention.

The New South Wales fires have been burning since September, destroying fifteen million acres (or more than two thousand square miles) and remain almost entirely uncontrolled by the volunteer firefighting forces deployed to stop them; on November 12, greater Sydney declared an unprecedented “catastrophic” fire warning. That was six weeks ago, and the blazes are almost certain to continue burning through the end of next month, the soonest real rain might arrive. They may last longer still, of course, aided in part by record-breaking heat waves that are simultaneously punishing the country (technically an entire continent, Australia as a whole averaged more than 100 Fahrenheit earlier this month) and devastating marine life in the surrounding ocean. “On land, Australia’s rising heat is ‘apocalyptic,” the Straits-Times of Singapore wrote. “In the ocean, it’s even worse.”

Already, smoke has enveloped the city of Sydney in air at least ten times as thick with smoke as is considered safe to breathe, setting off indoor fire alarms and suspending the city’s ferry service, since the boats couldn’t navigate the smog. The city of Melbourne, more than 500 miles away, has been choked by smoke, as well, and the glaciers all the way in New Zealand have changed color because of the fires, too. An early report that koalas were made “functionally extinct” turned out to have been erroneous, but a more recent report suggests that, due to the bushfires, 480 million animals have died. And because plants contain carbon which is released when burned, when the New South Wales fires finally do burn out, they almost certainly will have doubled Australia’s national carbon emissions for the year — or more.

You could pick almost any day from the last two months and be horrified by the images of that day’s burning. But on the eve of the new year, something about the random sampling that’s shown up in my social media feed seems especially harrowing.

The crew from Fire and Rescue NSW Station 509 Wyoming recorded this video showing the moment their truck was overrun by the bushfire burning South of Nowra. The crew was forced to shelter in their truck as the fire front passed through. #NSWFires #ProtectTheIrreplaceable pic.twitter.com/Hb0yVrefi9

This remarkable photo was taken in daytime in Victoria, Australia.

Allison Marion takes her sons, wearing masks, out in a boat on the lake to stay safe from the bushfires. #Mallacoota https://t.co/qW1mtiLnIR pic.twitter.com/ro4pMxPwMp

10:30am update from Dad at the wharf in Mallacoota – “fire front not far away” #Mallacoota #bushfirecrisis pic.twitter.com/MvgeiZqujM

Images like these are already disconcertingly familiar, especially from the California wildfires of 2017 and 2018. But the response to what’s transpired in Australia — again, over a period that has stretched into months — is unfamiliar, to me at least, and not in a good way. Those California fires transfixed the world’s attention, but while the ones still burning uncontrolled in Australia have gotten some media attention outside the country, in general they have been treated as a scary, but not apocalyptic, local news story.

What accounts for the difference? There are all the usual factors—the desire to look away, to avoid contemplating the scariest aspects of contemporary life or what they portend for our future, the shortsightedness of the media, reluctant to cover climate disasters, at least as climate disasters, and the forces of denial now seemingly embodied as much by Australian prime minister Scott Morrison (who was elected on a campaign pitched against climate action and who blithely took a long holiday in Hawaii while his country burned) as they are by Donald Trump or Jair Bolsonaro.

But two additional explanations suggest themselves to me, neither at all encouraging. The first is that the duration of this climate horror has allowed us to normalize it even while it continues to unfold — continues to torture, and brutalize, and terrify. The Camp Fire in Paradise, California did almost all of its damage in just four hours, and the short duration may have been as important to our collective horror as the speed. Perhaps if it had lasted longer, even burning with equal ferocity, we would nevertheless simply have gotten used to it as the white noise of catastrophe all around us, as impossible as that may seem to imagine, given the scale of suffering involved.

This hypothesis is especially concerning, of course, given the way that climate change will inevitably extend these sorts of horrors in the decades ahead. Today, there are categories of natural disasters, like droughts, we understand can last for months, or even years, and though they should demand our attention, rarely do. Already, we have added to that category disasters like the flooding that walloped the Midwest this spring — lasting many months in some places, preventing American farmers from planting crops on 19 million acres. But wrapping your head around flooding as an enduring, months-long disaster is one thing, however unthinkable it might have been to the average American five or ten years ago. Coming to see the wildfire season as a permanent threat is another terrifying adjustment, though Californians are now doing precisely that. But regarding the fires themselves — which can travel 60 miles per hour or more, creating their own weather systems that project lightning strikes miles away from the blaze, causing more fire — not as a sudden catastrophe but a semi-permanent condition strikes me as another level of normalization entirely. And yet here we are.

The second explanation is perhaps even more distressing. If you had told me, even six months ago, that a climate disaster like this one would strike a place like Australia, I probably would not have expected global wall to wall media coverage — seeing these Sydney opera house against an eerie backdrop of orange smoke makes for spectacular footage, but it’s perhaps less ripe fodder for social media than watching the Kardashians evacuate the valley by Instagram story — but I would have expected a lot more than this. That’s not because of high-minded faith in the media, or public interest in harrowing stories like these. It’s for a more sinister reason: for decades now, in the U.S. and Western Europe, we have paid much, much more attention to even small-scale suffering by the force of natural disaster when it strikes parts of the wealthy west than we ever muster for those suffering already so dramatically from climate change in Asia and especially in the global south.

That set of prejudices is a moral outrage, and an especially concerning feature of the global response to climate change, which is already punishing the developing world in ways almost no one in the wealthy west would consider conscionable — if they let themselves see it. But it has also proven maddeningly stubborn, and I would not have expected the same prejudices to blind the sympathy and empathy of millions across the U.S. and Europe to the plight of a mostly white, English-speaking “First World” former colony like Australia, however far away, in the face of disaster.

The global response to the bushfires has suggested, unfortunately, something more like the opposite: that no bind of tribal alliance or allegiance is strong enough that we won’t discard it, if discarding it allows us to see the suffering of those living elsewhere on the planet as insignificant to our own lives. These fires are just one disaster, of course, and the planet has many test cases like it ahead. But it would be among the most perverse grotesqueries of climate change if it brought about the end of these kinds of global prejudices — not to be replaced with a sense of common humanity but a system of disinterest defined instead by ever smaller circles of empathy.

Daily news about the politics, business, and technology shaping our world.

The business risk outlook for 2022