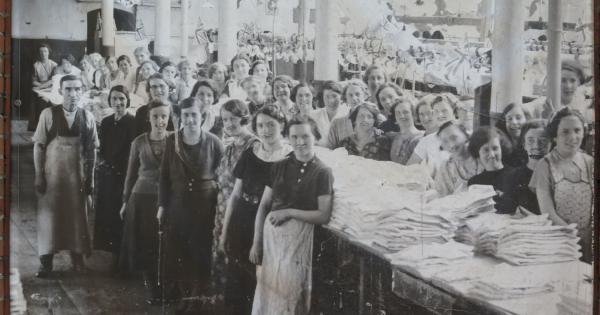 A Derry woman has launched a new project in a bid to keep alive the stories of Derry’s shirt factory industry.

For generations, the local shirt factories were the backbone of Derry’s economy.

The decline of the linen industry in the 1830s led to a skilled female workforce struggling to find employment in Derry.

However, with the growth in popularity of cotton shirts, the city soon became home to a burgeoning shirt-making industry.

It was an industry which developed quickly.

In the 1850s, there were five shirt factories in Derry.
By the end of the century, there were almost 40.

Shirt-making in Derry reached its peak in the 1920s when the shirt factories employed an estimated 18,000 people from the city and surrounding area.

Although the shirt-making industry later went into decline, and has more or less disappeared from the local economy, the impact of the industry remains very much in existence in the architecture of Derry.

Now, local woman Naomi Petropoulos, who is currently a PhD researcher at Queen’s University in Belfast, wants to collate the stories of people who worked in the shirt factories.

The aim of the project, she says, is to highlight the impact the factories had on the city as well as exploring the lives and experiences of the men and women who worked within them.

“Like many Derry people, I have family members who worked in the shirt factories,” she told the Derry News.

“I remember as a young child sitting in the car as we waited for my granny to emerge from the factory at the end of the day.

“I was always aware that the shirt factories were a huge part of Derry’s history, but it was only when I got older that I appreciated exactly how important they were.”

Naomi is currently seeking participants for the project who worked in the city’s factories between 1951 and 1981.

Unfortunately, due to the Covid-19 pandemic, she cannot meet with people face-to-face.

However, she has been using video calls as a means of recording participant stories.

For those who cannot carry out a video call, the local woman has also sought written stories from those who would like to get involved in the project.

“It’s a shame that I can’t meet with people at this time. However I want to make sure that as many people who want to get involved, can get involved,” she said.

“I have felt for a long time that as many stories and testimonies should be collected as possible before this living history is lost to the passage of time.

“Such a significant part of the city’s history deserves to be seen and heard and I hope in some small part I can help future generations understand the lives and experiences of the factory girls and boys of Derry.”

What Do You Know About Overseas Factory Delivery?