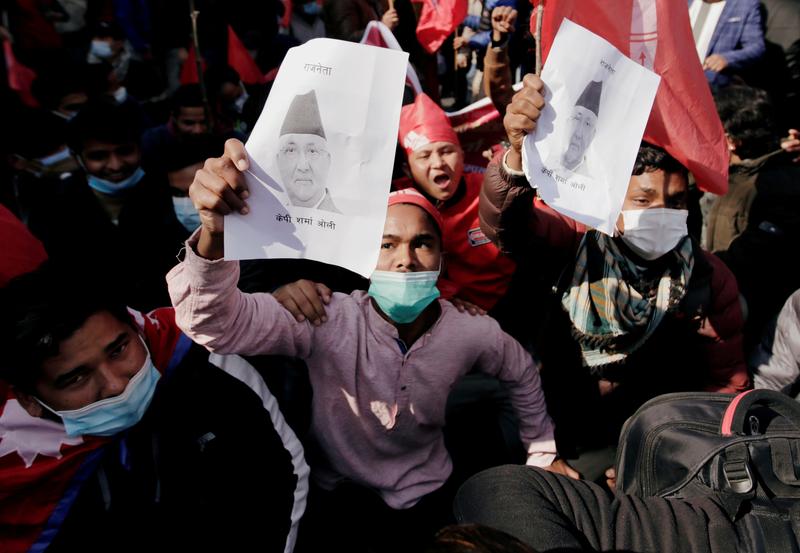 KATHMANDU (Reuters) – Nepal’s top court on Wednesday will begin hearings on petitions challenging Prime Minister K.P. Sharma Oli’s sudden decision to dissolve the parliament, a move that has triggered public outrage and has been labelled unconstitutional.

In their plea before the Supreme Court, politicians, activists and lawyers are questioning whether it is the legitimate right of the leader to dissolve the parliament, 18 months before schedule.

The Oli, 68, cited internal squabbling within his ruling Communist party and lack of political unity as reasons behind his Dec. 20 decision.

His colleagues and opposition political parties have blamed Oli for derailing a stable government amid a pandemic that has triggered an economic downturn.

Seven ministers have quit Oli’s government to oppose his move and protesters last month burnt effigies of him.

“The constitution duly defines and delimits the power of the prime minister,” said Dinesh Tripathi, an independent petitioner.

“It does not give Oli the prerogative to cause an untimely death to parliament at his will,” he said.

The five-member constitutional bench of the Supreme Court, including the chief justice, will hear at least 13 petitions questioning the rights of the prime minister.

Officials working with Oli said his move was in line with the constitution.

“We are fully prepared to face the challenge in the court,” said Rajan Bhattarai, an aide to Oli.

If the court upholds Oli’s move, Nepal will hold elections this summer. If not, parliament will be reinstated.

“If the verdict is in favour of the dissolution, there will be elections for a new parliament but we risk that in the near future, governments may not complete a full five-year-term, as the prime minister could dissolve it anytime,” said constitutional lawyer Bhimarjun Acharya.

“The country has been trapped into a tunnel of instability, as the dissolution was a blunder,” Acharya added.