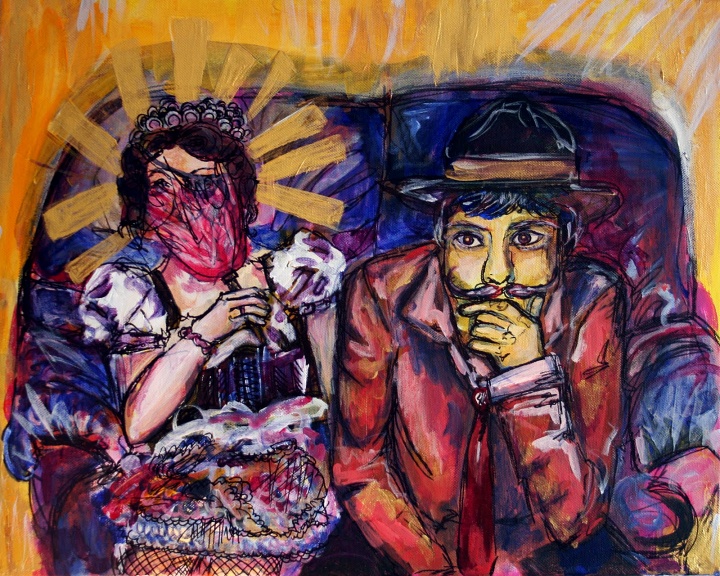 Victoria Nuland, and the Kagans Who Love Her

Recently on Twitter, a someone graciously dubbed me a “prophet” after rereading my April article arguing that “American Exceptionalism Scars Both Victim and Victimizer” – and which pivoted around actual philosophical prophet, Ms. Simone Weil.

This social media follower, “TheAyatollaOfRocknRolla,” is clearly a man of cinematic allusion – to 1981’s Mad Max 2: The Road Warrior – after my own heart. Still, my anecdote transcends any possible proclivity for the ole backdoor brag.

Because what prompted the Ayatolla’s comment was, as he noted, perusing the piece “as we watch the tragic comedy of political stupidities unfold!” That, of course, was a few days before the delusional – but dangerous – MAGA maelstrom unleashed on the Capitol yesterday. It is perhaps also an illustrative diagnosis of a broken system, rigged long before the latest indecency that’s been the Trump phenomenon – and which status quo Joe neither can, nor means, to overhaul.

That discomfiting truth is reemphasized each time the president-elect nominates a new national security official for his incoming team. It hardly takes a prophet to predict the sort of characters Biden trusts to caretakers America’s imperium. Frankly, it barely even demands an assiduous researcher.

Rather, the only real qualification seems a masochistic willingness to pull the same old threads and discover the old same disappointing interest-conflict certainties. And, in one sense, that’s no small thing – such commitment in the face of near-certain chagrin.

It recalls my own glutton for punishment guilty pleasure: true crime murder (non-)mysteries. Call me crazy but I find myself repeatedly rooting for the husband not to be the killer whenever a woman ends up dead, knowing full well he almost always is. Just for change.

And, appalling as the ongoing epidemic of violence against women is – and probably something one shouldn’t wager even mental TV bets on – the seemingly eternal bipartisan appointment of war-industry shills custom-made and meticulously trained to implement endless war, augurs even higher body counts. And the hits just keep on coming with Biden’s bunch.

I’d scarcely finished a critical analysis of the probable first female deputy defense secretary, Kathleen Hicks, when I awoke to Wednesday’s news that Uncle Joe had called up three more problematic prospects from the military-industrial complex minors. The three veterans headed back up to the show are Jon Finer, for deputy national security adviser; Wendy Sherman, for deputy secretary of state; and worst of all, Victoria Nuland, as under secretary of state for political affairs.

All are Obama Administration alumni; each worked for former Secretary of State John Kerry at one time or another. These are steady hands, experienced presiders over perennial war – capable company men to captain a systemic ship headed straight for a republic-shattering iceberg. Biden has entrusted them with the middle-management they know. Yet they’ve neither the mandate, mindset, nor skillset to turn this suicide machine around. One fears their fate lies – F. Scott Fitzgerald-style – in their personal and professional backstories.

So, like another tragic literary figure, expect each member of Biden’s Gatsby-like gang to “beat on, boats against the current, borne back ceaselessly into the past” – a past of futile interventionism that profits the war-profiteers who pay their immense mortgages in communities gated off from both far-flung foreigners and fellow citizens incurring the costs of their imperial nostalgia.

A Trio of Archetype’s Archetypes

There’s nothing so uninspiring as a played-out platitude. Unfortunately, Uncle Joe’s band of brothers (and more than the typical tally of sisters) are a passing coterie of walking clichés. They’re so embarrassingly formulaic that even a cursory investigator can seem a soothsayer. But the truth is, the consistent accuracy of my own depiction of the “archetypal Biden bro” is more function of a simple and proven model than mystical clairvoyance.

So to test that theory and see how closely the three newest appointees hew to my a November article model, let’s review the paradigm:

[The archetypal Biden nominee] sprang from an Ivy League school, became a congressional staffer, got appointed to a mid-tier role on Barack Obama’s national security council, consulted for WestExec Advisors (an Obama alumni-founded outfit linking tech firms and the Department of Defense), was a fellow at the Center for New American Security (CNAS), had some defense contractor ties, and marriedsomeone who’s also in the game.

Taking the trio in sequence and by the numbers:

After eight years in Obamian Camelot, Finer oversaw the political risk and public policy practice at Warburg Pincus, LLC, a global investment firm that holds some $62 billion in assets led by Obama’s first treasury secretary, Timothy Geitner. Warburg Pincus also just so happens to invest in companiesthat do extensive business with “blue chip customers” like General Electric, Honeywell, and Lockheed Martin, for such platforms as the perennially cost-overrunning money-pit that is the F-35 Joint Strike Fighter. In his spare time, Finer’s also a senior fellow at the Council on Foreign Relations.

It’s worth noting, however, that Finer has some rare – for a Biden bro – redeeming and unique experiences.

Before entering government, he was a foreign and national correspondent for the Washington Post, embedded with the Marines during the 2003 Iraq invasion, and later spent 18 months in Baghdad as it lurched towards civil war. Unlike his classic chickenhawk of a future boss, Jake Sullivan, Finer’s extensive experience with real Iraqis may have motivated his co-founding the Iraqi Refugee Assistance Project.

Since then, Sherman has worked with or for a range of military-industrial and strategic consultancy-complex related rackets. Specifically, she was Vice Chair of the Albright Stonebridge Group – her old boss’s international consulting firm – plus serves on the boards of the International Crisis Group and Atlantic Council, and is a member of the Council on Foreign Relations and the Aspen Strategy Group. Wendy’s even an MSNBC global affairs contributor.

She’s also married to another player, Bruce Stokes – director of global economic attitudes at the Pew Research Center, executive director of the Transatlantic Task Force of the German Marshall Fund of the United States, and a former senior fellow at the Council on Foreign Relations. That said, on the positive side, Sherman was, in fact, a social worker before entering public policy service, and a chief negotiator of the eminently sensible Iran nuclear deal.

Then there’s this: Nuland’s husband is Robert Kagan, an overtly neo-imperialist historian and hawkish foreign policy commentator at the Brookings Institution. And when it comes to Queen Victoria-the-Troubling, it is that “married to someone in the game” bit that’s particularly unsettling. Enter the neocons Kagan: a family of fiasco artists.

A Couple of Wild & Krazy Kagans

Before exploring the implications of her having married into the Kagan’s veritable [war] crime family, it’s worth noting that she’s a problematic hawk in her own right. With his decision to nominate Nuland as Under Secretary of State for Political Affairs, Joe may’ve really done it – risked real war, that can’t be won, and needn’t be fought, with a Russian nuclear superpower.

That’s a function of Nuland’s history of hawkish antagonism towards Moscow, plus meddling to orchestrate a Ukrainian regime change in the nearest of Russia’s near-abroad. Nominating Nuland is nothing less than an unnecessarily provocative finger in the Russian eye. She’s a known quantity east of the Dnieper, and not in a nice way – she’s despised by Mr. Putin and her confirmation will surely serve as a conflict accelerant.

Furthermore, as a simple – and somehow satisfying – spiral as the ole Wikipedia all to easily reveals, Nuland’s nuptial connections could offer nothing less than a path back into power for not just the usual Biden bunch neoliberal interventionists, but Bush-Cheney-era neoconservatives.

First off, she was Principal Deputy National Security Advisor to Vice President Dick Cheney from July 2003 until May 2005 – rather pivotal and horrifying decision-making years, those. Equally troubling, she’s married to none other than Robert Kagan – the man Col. (ret.) Andrew Bacevich called America’s “chief neoconservative foreign-policy theorist.”

In 1997, Kagan co-founded the king neoconservative think tank Project for the New American Century (PNAC) with William Kristol – an outfit which wrote the faux-scholarly policy papers, and provided much of the intellectual energy, undergirding not only the unhinged Iraq invasion, but the broader neo-imperial strategy that’s brutally transformed the world and killed maybe millions.

And the influences and machinations of the Kagan Krew runs far deeper still. The still living 88-year old patriarch, Nuland’s father-in-law Donald, was a signatory to PNAC’s “Statement of Principles” – along with a who’s who of war crime architects and enablers, such as Elliott Abrams, Jeb Bush, Dick Cheney, “Scooter” Libby, Donald Rumsfeld, and Paul Wolfowitz.

Ms. Nuland’s brother-in-law and his bride, Fred and Kim Kagan, must represent the familial version of Marx’s old truism that history repeats the second time around (or in this case, second generation) as more farce than tragedy. These two fellow West Point faculty alumni may be historians by day, but they’re cartoonish – if apparently convincing – neoconservative zealots in their free time.

Both advised on – some say cooked-up – Bush’s Iraq “surge” strategy, received official hearings, and held positions on the staffs of Generals David Petraeus, Stanley McCrystal, and John Allen in Baghdad and Kabul. Kim is an especially enthusiastic – and frankly offensive to we foot soldiers – combat voyeur, having according to her own bio, “conducted many regular battlefield circulations” of Iraq and Afghanistan between 2007 and 2010.

Suffice it to say I’ve heard at least one highly respected senior military officer say something to the effect of: “Oh Christ! The damn Kagans are coming to visit again!” In other words, their distant dogmatic abstractions didn’t usually jive with realities of soldierly leaders on the ground.

So it goes; and so some will ask, if Nuland’s husband and his neocon-royalty family will really have meaningful influence on how her suit of the “political affairs” under her under-secretarial charge at State? It’s hard to say, of course, but count this author a firm believer that the personal is, in fact, often political – and possessing enough of the historians eye to know that informal and romantic relationships are often uncomfortably impactful.

Look no further than Sarah Polk crafting speeches and correspondence for her Mexico-conquering husband; Edith Wilson basically taking control of the presidency after Woodrow’s publicly-downplayed stroke; or even Nancy Reagan turning “to the stars” – well, an astrologer – to time everything from White House meetings, travel, and even Ronnie’s cancer surgery.

Besides, Nuland has paved a hawkish enough path of her own these last three decades to raise five-alarm fire bells. Just one pesky problem: thanks to Biden’s batch of other picks, there’ll be only interventionist arsonists running the response. That is, the rest of Joe’s almost absurdly incestuous lot – a sort of best friends gang that joins all the same clubs.

Take the Truman Center for National Policy, and its “membership of diverse leaders inspired to serve in the aftermath of 9/11 and committed to shaping and advocating for tough, smart national security solutions.”

Well, some of those members committed to – unneeded and counterproductively chickenhawk – toughness include:

In other words, their’s is a small world full of small thinking masquerading as big ideas. And that, babies, is a formula for four more years of failure.

Job losses fall unequally across the US economy