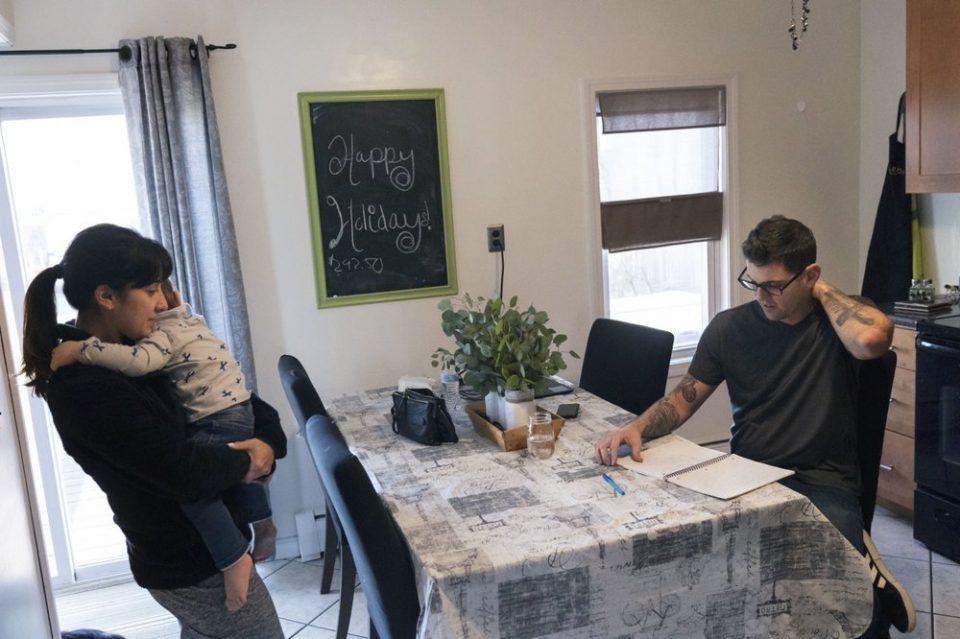 Comedian Brad Pierce, right, looks over the notebook us uses to write jokes as he sits in the kitchen next to his wife, Carmen, and their nephew, Maddox, 1, in West Warwick, R.I., Friday, Jan. 8, 2021. Pierce was finally doing well with his comedy when the pandemic hit. Now he wonders if he can possibly build up his career again. He has a friend who drives for Amazon and fears having to get a job like that while talking about the good old days when he was an entertainer. (AP Photo/David Goldman)

WASHINGTON (AP) — Ten months into America’s viral outbreak, low-income workers are still bearing the brunt of job losses — an unusual and harsh feature of the pandemic recession that flattened the economy last spring.

In December, the nation shed jobs for the first time since April. Once again, the layoffs were heavily concentrated in the industries that have suffered most because they involve the kind of face-to-face contact that is now nearly impossible: Restaurants, bars and hotels, theaters, sports arenas and concert halls.

With the virus transforming consumer spending habits, economists believe some portion of these service jobs won’t return even after the economy has regained its footing. That trend will likely further widen the economic inequalities that have left millions of families unable to buy food or pay rent.

Typically in a recession, layoffs strike a broad array of industries — both those that employ higher- and middle-income workers and those with lower-paid staff — as anxious consumers slash spending. Economists had worried that the same trend would emerge this time.

Instead, much of the rest of the economy is healing, if slowly and fitfully. Factories, while not fully recovered, are cranking out goods and have added jobs every month since May. Home sales have soared 26% from a year ago, fueled by affluent people able to work from home who are looking for more space. That trend has, in turn, bolstered higher-paying jobs in banking, insurance and real estate.

“Such differences in … employment loss between the highest- and lowest-wage workers are almost certainly unprecedented among U.S. recessions over the past 100-plus years,” Brad Hershbein, an economist at the Upjohn Institute for Employment Research, and Harry Holzer, an economist at Georgetown University, concluded in a new research paper.

On the surface, the December jobs report the government issued Friday was dismal: The economy lost 140,000 jobs. It was the sixth straight month in which hiring has slumped from the previous month. Unemployment remained stuck at a still-high 6.7%.

But the negative number stemmed entirely from a brutal loss — nearly 500,000 jobs — in a category that includes restaurants, bars, hotels, casinos and entertainment.

State and local governments also cut workers. So did hair salons and other personal services. There were layoffs, too, in education.

Nearly every other industry added jobs. Construction gained 51,000, financial services 12,000. Transportation and warehousing companies, beneficiaries of a surge in e-commerce and delivery services amid the pandemic, gained nearly 47,000.

Job losses have “definitely been very heavily concentrated in certain industries — much more so than prior recessions,” Hershbein said in an interview.

Once the coronavirus vaccines become distributed more widely, and the latest government aid package is pumped into the economy, most analysts expect a solid recovery to kick in this summer. The incoming Biden administration, along with a now fully Democratic-led House and Senate, will also likely push additional rescue aid and spending measures that could accelerate growth.

Economists note that the $2 trillion aid package the government enacted in March, which included generous unemployment benefits and aid to small companies, did more to prevent layoffs from spreading than many analysts had expected.

But a big unknown overhangs the 2021 economy: Will the economic recovery come fast enough, and be robust enough, to absorb many of the Americans who lost jobs in the hospitality industries into more resilient sectors of the job market?

For now, the resurgent pandemic has made consumers reluctant to shop, travel, dine out and congregate in crowds and led states and cities to reimpose stricter limits on restaurants and bars.

The trend has upended the lives of people like Brad Pierce of West Warwick, Rhode Island. Pierce had gradually built a career as a stand-up comedian, only to see it derailed by the pandemic and restrictions on the bars he performed in.

Now, he wonders if that life will ever return. Even when the bars where Pierce worked had reopened, they couldn’t offer live entertainment because of coronavirus restrictions. Some of these venues, he fears, won’t survive.

Pierce receives about $500 a week in unemployment aid, and his wife still works as a health care technician — busier than ever because she administers COVID-19 tests. Though he feels fortunate financially, the contrast sometimes depresses him.

“She’s working all the time, while I can’t work, and it’s a terrible feeling as a husband and a spouse,” said Pierce, 40.

In the meantime, there have been odd gigs for him here and there. The weirdest was a stand-up routine he did via Zoom for a company’s holiday party. He asked the employees to unmute so he could hear them laughing, only to be hit by a cacophony of dogs barking, kids yelling and TVs blaring.

He spent the rest of the gig watching his audience’s silently moving lips to see if they might be laughing.

Hershbein and Holzer’s research found that job losses have been deeper among Black and Hispanic workers than among whites and also more pronounced for those in lower-paying jobs. Employment among the lowest-paid one quarter of Americans has sunk nearly 12% since February of this year, Hershbein found. Among the highest-paid quarter, it’s declined must less — 3.5%.

The proportion of white Americans with jobs has fallen 6% since the pandemic; among Black and Hispanic Americans, it’s down 10%, Hershbein said. This means that as some portion of the pandemic job losses become permanent, nonwhite workers will be hurt the most.

Michelle Holder, an economist at John Jay College, noted that the two biggest sources of job losses among Black women have been cashiers at stores and restaurants, including fast-food, and in child care. She said she fears that many of those jobs likely won’t return even as the pandemic fades as some shifts in the economy become permanent.

Business travel won’t likely return to its previous levels as more meetings are conducted remotely. Many health care appointments are now held online, thereby reducing the need for some staffers in doctor’s offices. That may end a decade-long narrowing of the Black-white unemployment gap, given that many lower-paid jobs are disproportionately held by Black workers.

“There are significant changes coming in terms of where we work, what jobs will be available,” Holder said. “All this will hit women, low-wage workers and people of color.”

As the pandemic recession rages on, more small businesses have been forced to close. This trend threatens to become a long-term drag on the job market, because new companies will have to be created to absorb many laid-off workers.

David Gilbertson, vice president at UKG, a company that makes employee time-management software, said that among his firm’s clients with fewer than 100 employees in March, 13% have now closed — more than double the figure in a typical year. Another round of small-business loans, included in the $900 billion aid package approved last month, will be crucial to help prevent another wave of closings.

“They’ve made it this far,” he said, “and now they’re on the brink of having to close down.”

In the meantime, the struggling jobless include people who had forged independent careers — people like Bryan Blew, who quit his job as an equipment repairman in Kansas City a year ago to become a full-time musician in Las Vegas. Before the pandemic, Blew typically played bass guitar in bands at casinos, bars and other venues several nights a week. He isn’t sure the Vegas music scene will ever return to what it was.

Blew, who hasn’t played a gig since March, is now wrestling with whether to give up hope of rebuilding his music career. For now, he’s working as a delivery driver for a sandwich shop, earning $9 an hour before tips. He receives unemployment benefits, depending on how much he earns with his job in a given week.

How to eliminate data silos to fuel agility and productivity

All you need to know about intellectual property rights