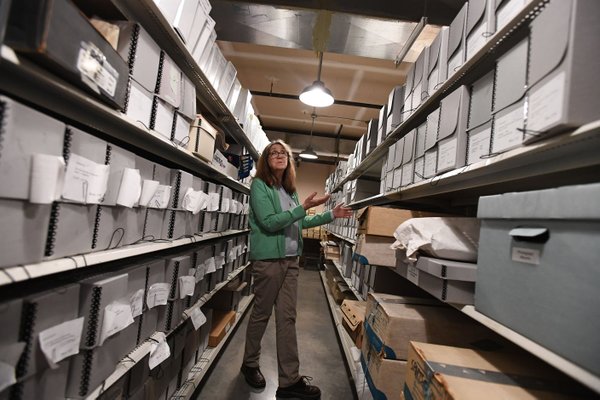 “We have 10% of our collection currently on view,” said Austen Barron Bailly, chief curator for Crystal Bridges Museum of American Art. “That figure will range across the museum landscape depending on the size of the collection.”

Explore current and upcoming exhibits at some of Northwest Arkansas’ museums.

The Shiloh Museum of Ozark History in Springdale also has about 10% of its works on display, with the remainder stored in the museum’s basement under strict preservation standards, said Carolyn Reno, collections manager and assistant director.

“Exposure to light for a long time can make things fade,” Reno said. “You want to give them rest from that, particularly certain materials like textiles and photographs.”

The amount of stored items for museums may vary, but having just a fraction of their exhibits on display at any given time is common, Reno said.

“You always have more in storage than you have on exhibit. It’s just a given,” she said. “We’ve been here 50 years, so we have a lot of collections.”

The museum tells the story of the Ozarks through artifacts and exhibits, which include a substantial manuscript and photograph collection, she said.

“They will have a theme that tells some aspect of Northwest Arkansas history,” Reno said. “Sometimes they kind of verge toward the artistic.”

Few museums can tell a story independently, creating opportunities for venues to share efforts and exhibit items, she said.

Sharing exhibit material frees storage space, creates opportunities to influence other communities, builds awareness for Northwest Arkansas and allows access to exhibit items people may not otherwise have a chance to experience.

“We create opportunities for people to see works of art that they would never have the chance to see because they’re not in our collection,” Bailly said. “We do try to work with a range of art museums.”

Northwest Arkansas museums often support each other by sharing items, Reno said, noting Shiloh has borrowed works from Crystal Bridges and the Rogers Historical Museum in support of prior exhibits.

“They had some materials in their collections that we didn’t have that helped us tell the story,” Reno said.

The “Instruments of Faith” special exhibit was on display at Shiloh from Feb. 4, 2019, through Jan. 11 and featured handmade guitars by Ed Stilley from Carroll County. The guitars were all loaned by private collectors, Reno said.

“He was a man from this area who felt like he got the calling to build these guitars to give to children,” she said. “It became quite a thing.”

The exhibit is being replaced by the “Going Greek: University of Arkansas Fraternities and Sororities,” Reno said. Many of the items featured in the exhibit from Feb. 3 through Jan. 9, 2021, will be on loan from featured Greek organizations.

“We are working with a community we’ve never worked with before, so it will be interesting to see what kind of audiences we get for that,” she said.

Shiloh is sharing band posters with the Rogers Historical museum for “The Diverse History in Music in Northwest Arkansas” exhibit, which ends Feb. 23, Reno said.

“I personally had a few things myself since I’ve lived in Northwest Arkansas since the ’70s,” Reno said.

The idea of sharing and creating access to art is fundamental to Crystal Bridges’ efforts to make art part of people’s daily lives, Bailly said.

“The opportunity to create those connections for people, to engage with something that will outlast us is very powerful,” she said. “We believe those things are fundamental to becoming our best selves.”

Sharing works with other museums creates access for people who may not have had an opportunity to see them at Crystal Bridges, Bailly said.

“The mission of Crystal Bridges is to welcome all from an internal and external perspective,” she said. “It drives everything that we do, and that opportunity to create access both at home and through the works of art around the globe is fundamental.”

Crystal Bridges loaned 32 objects to other museums in 2019, Bailly said.

“Those seem like low numbers, but it’s actually quite high when you think about 30 different kinds of projects that we’re helping to support around the nation or the world,” she said.

Sharing select works is common for museums, but not all venues have the ability to exhibit what fine art museums have to offer, Bailly said.

“It’s a very formal process where we strongly vet the significance of the project to which we would lend,” she said. “We take the stewardship from a scholarly curatorial and collections management perspective extremely seriously.”

Crystal Bridges has to consider everything from security to storage, Bailly said.

The museum must also have a compelling reason to exhibit a loaned work because of extenuating factors, Bailly said.

George Bellows’ Cliff Dwellers is the crown jewel of the Los Angeles County Museum of Art, she said. The 40-by-42-inch oil on canvas painting has been on display at Crystal Bridges since May 2019 while its home museum is undergoing construction.

“They’re unable to show it,” Bailly said, noting the work will be on display at Crystal Bridges for several more months.

Museums such as Shiloh also take advantage of resources such as ExhibitsUSA, a traveling exhibition program managed by the Mid-America Arts Alliance. The alliance describes itself as a nonprofit arts organization focusing on strengthening communities and improving lives through cultural experiences in Arkansas, Kansas, Missouri, Nebraska, Oklahoma and Texas.

ExhibitsUSA offered 78 exhibitions in 27 states in 2019, according to Maggard.

“The local Hmong community in our area was particularly excited to have the show in our gallery,” said Bobby C. Martin, university gallery director. “They cooked traditional food for the opening reception, and many wore traditional Hmong clothing to the event. Several community members stayed long after the reception was over, talking to attendees and among themselves about the work in the show and the textile tradition that they grew up with in their own lives.”

Creating such opportunities is a significant responsibility for museums, Bailly said.

“That is sort of the function of museums, is this true belief that welcoming people into the space of a museum is an opportunity to connect with something deeply human, deeply artistic, deeply creative, deeply historical, deeply cutting edge,” she said.

Allowing works to travel within and beyond the state brings attention to Northwest Arkansas, Bailly said.

An exhibit on loan from Crystal Bridges or Shiloh may inspire people to learn more about the region.

“They find out what the amenities are that surround the rest of it,” Reno said. “You never know what someone is going to take away from an exhibit.”

The engagement activities accompanying an exhibit reinforce the vital role the arts play in a community’s economic, cultural and social vibrancy, Maggard said.

“You will all of a sudden be introduced to this enterprise and all that we do here,” Bailly said. “The neurons start to fire in terms of what art and culture can be in a region and that larger impact.”

“If you’re from outside the region, you’re paying attention to what we’re doing — that’s where the notoriety has grown,” Bailly said of Crystal Bridges. “People continue to come, and they want to see what’s happening here.”

The museum plans to add to that momentum by continuing to share works throughout the world, she said.

Rosie the Riveter by Norman Rockwell is one of the museum’s most popular paintings and is on tour with the “Men of Steele, Women of Wonder” exhibit, Bailly said. The work will return to the museum this month, only to be loaned to the Norman Rockwell Museum in Stockbridge, Mass., later in the year.

The museum’s Jimson Weed/White Flower No. 1 by Georgia O’Keeffe will travel to Madrid and Paris as part of the “Georgia O’Keeffe: The Painter’s Lens” exhibition at the Museo Ncional Thyssen-Bornemisza in Madrid and Centre Pompidou in Paris from March through December 2021, Bailly said.

“It’s incredibly exciting,” she said. “Georgia O’Keefe is world famous, but there are certain parts of the world that have not had a chance to have that face-to-face encounter with some of her most important works.” 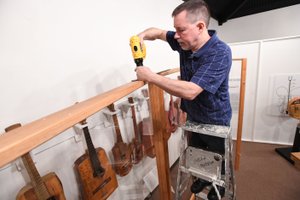 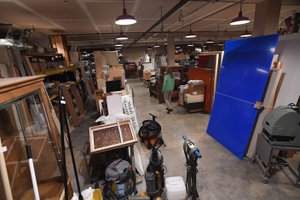 Carolyn Reno, collection manager and assistant director, walks Wednesday among an extensive collection in the basement at the Shiloh Museum in Springdale. (NWA Democrat-Gazette/J.T. Wampler)