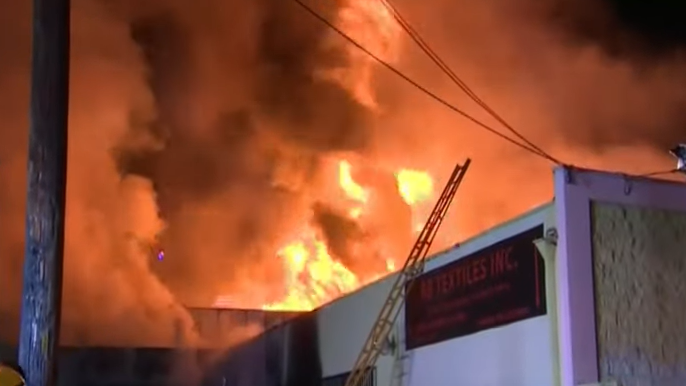 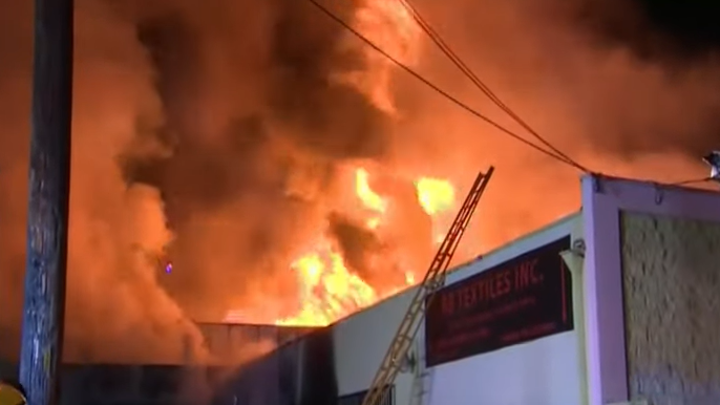 Los Angeles firefighters battle a massive fire that spread to two buildings in the city’s Garment District on Tuesday.

More than 120 firefighters were battling a two-building blaze early Tuesday in the Garment District of downtown Los Angeles.

The fire ignited around 4:45 a.m. near Crocker and East 8th streets and quickly spread to a nearby commercial building occupied by a fabric wholesaler. The textiles inside the building helped fuel the flames.

The fire appeared to be under control by 5:30 a.m., only to reignite and expand to the building next door, which also houses textiles. By 7 a.m., massive plumes of heavy smoke and flames were billowing into the air as crews tackled the fire with heavy water streams, ladder pipes and ground operations.

“Despite firefighters’ dedicated efforts, they discovered the fire extended into the structure on the [northwest] side,” the Fire Department said.

Two firefighting units are tackling the blaze, according to Stewart, including the original unit working in offensive mode on the now-smoldering first building. A second defensive unit is attacking flames at the building next door.

No injuries have been reported. The Fire Department’s Arson Section is on scene, but the cause of the blaze has not yet been determined.