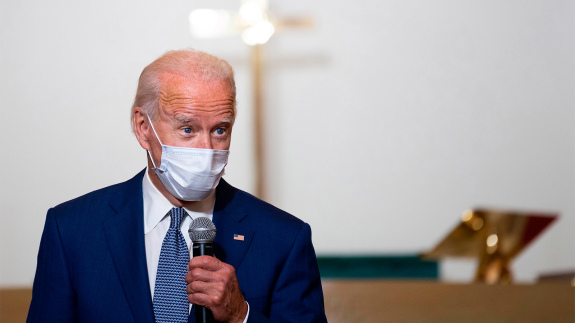 Democrats are once again doubling down on religion this year. Faith was on full display during the Democratic National Convention, where Joe Biden closed out the week with several pointed references to his Catholic faith. And the Biden campaign is also making an ambitious play for white evangelical Protestants and Mormons, two loyal Republican groups where Democrats hope to make some inroads.

Often lost in this, though, is the fact that Democrats are mostly ignoring a massive group of voters who are becoming an increasingly crucial part of their base: people who don’t have any religion at all.

Right now, voters with no religious affiliation look like they might back Biden in record numbers. According to a poll conducted by the Pew Research Center in early August, 72 percent of nonreligious voters — a group that includes people who identify as atheists, agnostics and nothing in particular — are planning to support Biden. That’s 4 percentage points higher than the 68 percent who supported Hillary Clinton in 2016. And that’s a big deal, because despite being frequently overlooked, nonreligious people make up a sizable part of the electorate. An analysis of validated voters by Pew found that religiously unaffiliated voters accounted for one-quarter of the electorate in 2016, and 30 percent in 2018.

The unaffiliated are a key demographic for Democratic candidates in particular. More than one-third of the people who voted for Clinton in 2016 were religiously unaffiliated, making them just as electorally important for Democrats as white evangelical Protestants are for Republicans. Yet despite constantly hearing about the importance of white evangelical voters in an election cycle, Democratic politicians have been slow to embrace the growing number of nonreligious people who vote for them. Why?

In the past, the challenges of organizing the religiously unaffiliated have made it easy to understand why Democrats haven’t made a real effort to appeal to them more. As most don’t regularly gather like a church congregation, religiously unaffiliated Americans can be difficult to reach. A lack of institutional leadership also means there aren’t many prominent people or groups showing up to nudge politicians to pay attention to their issues. And despite rising tolerance for atheists and nonreligious people in American culture, overt appeals to the nonreligious still run the risk of turning off the majority of voters who are people of faith.

But there are signs that antipathy toward President Trump has mobilized some religiously unaffiliated voters in unprecedented ways. Although Trump is not an overtly pious figure, he’s embraced a vision of American culture that privileges Christian identity and heritage. That’s a view that most nonreligious Americans reject, which is likely a part of the reason that their support for Biden is so high, despite the campaign’s minimal outreach efforts. In the coming years, though, that calculus might have to change, since the growing size of the country’s nonreligious population could make these voters more difficult for Democrats to ignore.

“I think in future elections we’re going to see more of an effort to reach a secular voting bloc and the reason is simply that they’re continuing to grow,” said David Campbell, a political science professor at the University of Notre Dame who studies religion and politics. “It’s too ripe a target for politicians to ignore.”

Over the past 10 years, the share of Americans who identify as Christian has fallen by 12 percentage points, while the share of people who say they have no religious affiliation is up 9 percentage points. That breaks down to 1 in every 4 Americans who are now religiously unaffiliated, including 40 percent of millennials. Meanwhile, there’s no sign that nonreligious Americans are returning to religion as they get older.

These shifts stand to benefit Democrats more than they benefit Republicans. Nearly two-thirds of religiously unaffiliated Americans identify as Democrats, a sharp increase from just a few decades ago, when the (much smaller) nonreligious population was fairly evenly split between the parties. And in 2018, a record-high share (75 percent) of religiously unaffiliated voters supported Democratic candidates. As the table below shows, that kind of extreme partisan tilt is rivaled by only two other major religious groups: Black Protestants and white evangelical Protestants.

One reason we haven’t heard as much about religiously unaffiliated people is because they are often dismissed as less likely to vote, even as their share of the total population has grown. But that perception of nonreligious voters as less engaged could be increasingly wrong, as there are indications that the voting gap between secular and religious Americans has shrunk in recent elections. And surveys also indicate that nonreligious people are just as likely as religious Americans to donate and engage in other political activities. A recent working paper also suggests that a lack of religious engagement may not be the main driver of lower turnout among secular people. Instead, religiously unaffiliated voters were more likely to have other characteristics (in particular, being young) that also correlate with low turnout.

“It turns out that when you put in basic statistical controls, most of the secular voting gap in recent years disappears and nonreligious people appear to turn out at about the same rate as [religiously] affiliated people,” said Evan Stewart, the study’s author and a sociology professor at the University of Massachusetts Boston. And because more religiously unaffiliated voters are now older — roughly one-third of nonreligious people are younger than 30 — it’s possible that this bloc will start voting more regularly, too.

Additionally, anger at Trump is motivating many nonreligious voters to get more politically involved. A majority (56 percent) of religiously unaffiliated Americans — including nearly three-quarters (73 percent) of atheists and agnostics — say Trump has been a “terrible” president. And there are signs that religiously unaffiliated people have become more politically engaged since Trump was elected — one survey conducted in 2018 found that nonreligious people were more likely than their religious peers to have attended a rally or contacted a political official.

That anger and energy could help drive up support for Biden among religiously unaffiliated voters this year, even without much outreach from the campaign. (Not to mention, nonreligious voters’ views on issues like abortion, immigration, health care and climate change do tend to align pretty well with Democratic policies overall — which might suggest that Democrats can reach this group simply by doing what they’re already doing.)

But Sarah Levin, a political consultant who focuses on secular groups and communities, said Democrats shouldn’t see this election as a sign that they can take nonreligious voters for granted. Secular people have values too, she said, and hearing politicians and parties speak to those values can motivate them to get more politically involved.

Meanwhile, support for progressive policies doesn’t necessarily translate to enthusiasm for mainstream Democratic candidates. Sen. Bernie Sanders, for instance, was consistently the favorite of religiously unaffiliated voters during the Democratic primary, and Democratic candidates appear to have gotten record-high support from nonreligious voters in the 2018 midterms in part because they peeled off people who voted for third-party candidates like Jill Stein and Gary Johnson in 2016.

Levin said there are ways to make appeals to secular voters that can also speak to religious Democrats — for example, emphasizing the importance of protecting religious minorities and nonreligious people through the separation of church and state, or focusing on science-based issues like climate change. That kind of big-tent strategy isn’t without risk, though. “The last thing Democrats want is to be portrayed as the godless party, because that would probably turn off a lot of voters,” Campbell said. But he added that Democrats may be missing a big political opportunity if they don’t start thinking about ways to engage with nonreligious voters as a group.

“Until parties and politicians start talking to secular voters as a bloc, voters won’t see themselves that way either,” he said. “What you have on the right with white evangelical Protestants is a distinct group that can be courted and discussed. The left hasn’t figured out how to do that with nonreligious voters. But we could see more efforts in that direction going forward.”