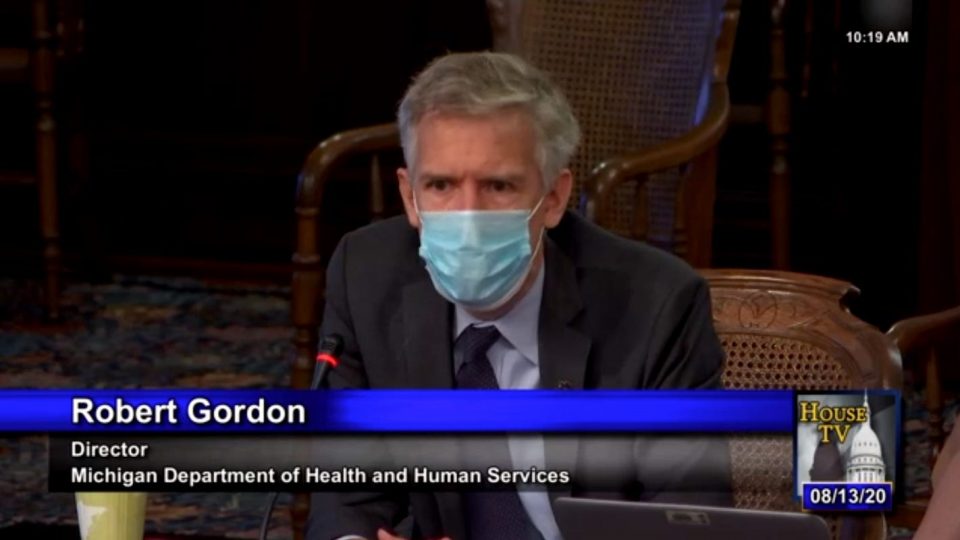 The governor unveiled a new TV ad in which Michigan State basketball coach Tom Izzo and other sports figures urge Michigan residents to mask up, July 15, 2020.

The leader of Michigan’s health department issued a sweeping order Friday that largely mirrors statewide mandates previously levied by Gov. Gretchen Whitmer in an effort to curb the spread of the coronavirus pandemic.

The newly instituted order requires masks at any public gathering with two or more people — including sporting events and schools — for much of the state and maintains restrictions on the number of people who may enter stores or restaurants. Unlike under Whitmer’s orders, bars are now allowed to operate but they may only serve alcohol to people who are sitting down and six feet apart. 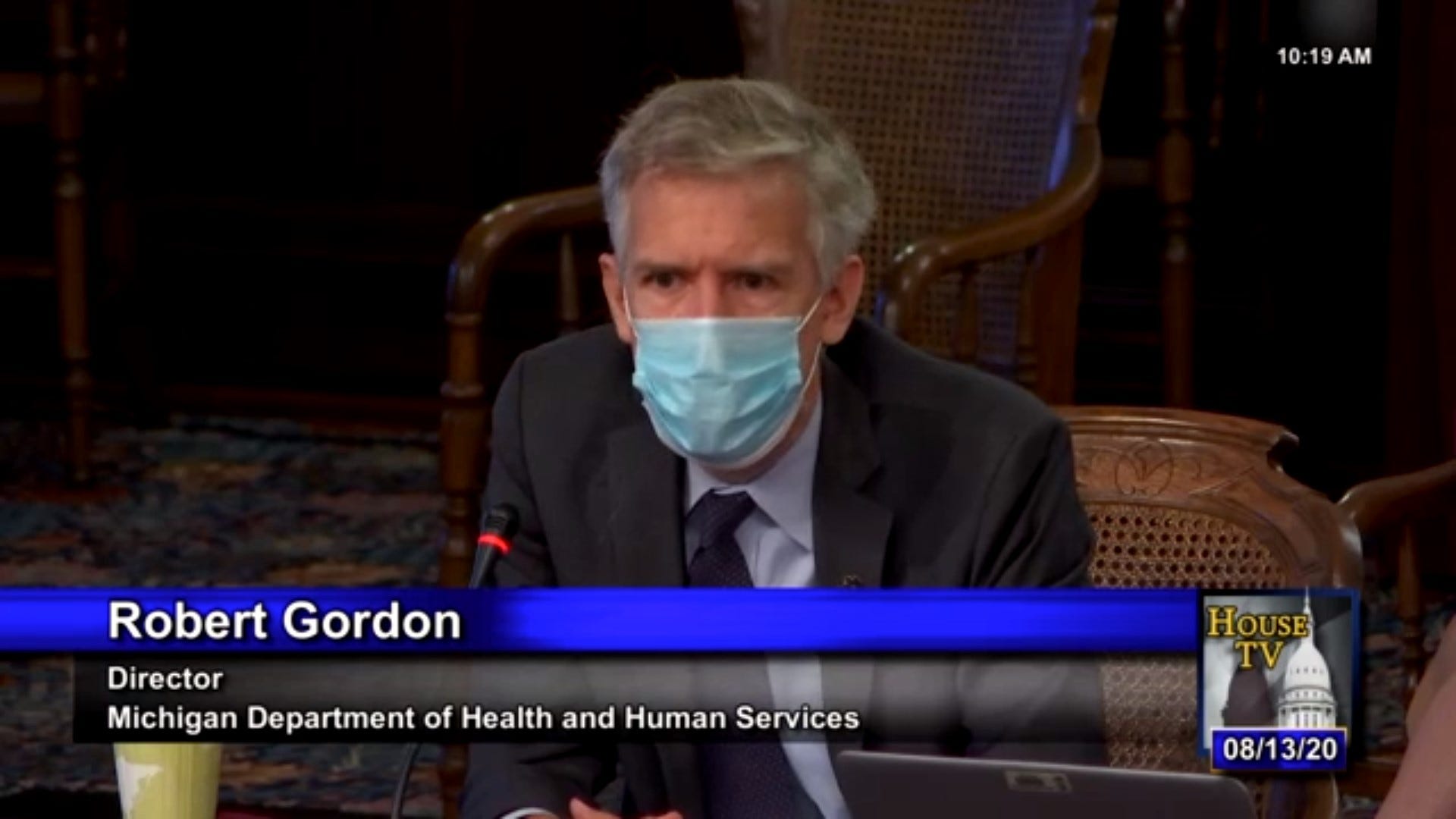 There are still masks exemptions in the order, including for those who medically cannot wear one, people who are eating or those attending a religious service.

The order also requires contact tracing efforts for specific locations like barbershops, entertainment and amusement venues, like some high school sporting events, movie theaters and bowling alleys. There are exceptions for outdoor, non-ticketed events. But the order still requires that anyone who wants to enter one of the covered establishments must provide their name and contact information, and that the business must keep this log in the event someone contracts COVID-19 and health officials need to reach to attendees.

Robert Gordon, director of the Michigan Department of Health and Human Services, said the order is needed after a recent Michigan Supreme Court decision threw into flux months of actions taken by the governor.

“We understand people are confused and they want clarity, and that’s why we have issued orders that, as much as possible, are the same as the orders that were already in place, because there was this extremely disruptive court case and we’re trying to just reinstate,” Gordon said in an interview Friday with the Free Press.

“Nothing would make us happier than to be able to pull back on the requirements here. Nobody is enjoying this. We’re doing this because wearing masks and social distancing are our best tools for constraining COVID, saving lives and getting back to normal.”

Gordon noted these orders are especially necessary now given the ongoing severity of the pandemic. He pointed to the rising number of cases and hospitalizations in Michigan in recent weeks.

As of this week, there have been more than 132,000 confirmed COVID-19 cases in the state and more than 6,800 deaths from the disease caused by the coronavirus, according to the state health department.

Last Friday, the Michigan Supreme Court ruled 4-3 that the Emergency Powers of Governor Act of 1945, which Whitmer has been using as the major legal underpinning for her emergency orders related to the pandemic, is unconstitutional because it unlawfully cedes powers that belong with the Legislature to the governor.

The court also unanimously ruled that under the Emergency Management Act of 1976, Whitmer cannot maintain a state of emergency beyond 28 days without legislative approval. That approval expired at the end of April, and has not been renewed.

While Whitmer said she disagreed with the court’s decision, she noted there were “alternate sources of authority” through which orders aimed at preventing the spread of the pandemic would continue.

These include the actions of Gordon and other state agency administrators. Gordon said the department is issuing the orders in accordance with a state law stemming from the 1918 flu pandemic, one that was not addressed by the Supreme Court ruling.

The specific portion of the law Gordon cites states, in part, “If the director determines that control of an epidemic is necessary to protect the public health, the director by emergency order may prohibit the gathering of people for any purpose and may establish procedures to be followed during the epidemic to insure continuation of essential public health services and enforcement of health laws.”

“The department is acting under a different law, enacting in response to the Spanish flu epidemic of 1918 and meant to deal with exactly the circumstance we are facing. We are acting under a specific authority granted by the Michigan legislature to save lives in this very circumstance of a pandemic,” Gordon said.

The order applies to all of the state, but there are some looser restrictions for Region 6 that stretches across the northern Lower Peninsula, from Traverse City to Alpena.

Specifics of the order include:

The orders were both heralded by health experts and blasted by some business owners and other citizens. They prompted protests at the Capitol earlier this year. On Thursday, state and federal authorities announced they had thwarted an effort by 13 men to allegedly kidnap and kill the governor, at least in part based on the idea that she had overstepped her executive authority.

Many Republican lawmakers have complained for months about Whitmer’s executive orders, arguing they usurp the power of the legislature and are overreaching. They point to at least piece of legislation the governor vetoed as well, arguing she does not want to work with lawmakers to pass measures that would serve instead of executive orders.

After the Supreme Court’s ruling, state senators returned to session Thursday to take up several measures introduced months earlier. The measures would increase unemployment insurance for people who lost their job due to the pandemic and offer legal protections to businesses trying to operate under health and safety regulations.

Although the bills could have been put up for a vote over the summer or more recently, they passed Thursday with bipartisan support. House lawmakers are expected to take up the measures on Tuesday and send them to the governor.

The health department had conversations with business and trade associations Friday morning to discuss the specifics of the order. Gordon said the state is looking for feedback, and could change some requirements in the future.

For now though, he said these orders will help keep all Michigan residents safer.

“We must keep our guard up. You can be a Democrat or a Republican, you can support orders or oppose them. The virus does not care, and it is growing. So we have to respond based on the science, and that’s what our actions this week have done,” Gordon said.

NLNG Offers 55% Of Procurement For Train 7 Execution To Nigerians – :::…The Tide News Online:::…

How the Pentagon Was Duped by Contractors Using Shell Companies