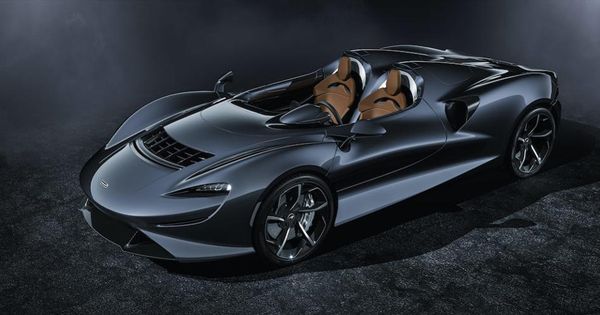 McLaren Automotive has revealed its latest sports car, the Elva. This roadster is the marque’s first open-top road car and joins the pinnacle Ultimate Series. Only 399 are planned, each priced from around $1.8m. McLaren creates extreme sports cars – pioneering in their design, engineering, materials and construction. This open-top two-seater Elva continues the brand theme, promising great power and a uniquely McLaren drive with its own carbon fiber chassis and body, no roof, windscreen or side windows.

The name is a homage to the evocative Bruce McLaren-designed McLaren-Elva M1A [MkI], M1B [MkII] and M1C [MkIII] – produced as customer versions of the Group 7 McLaren race cars in the 1960s. Company CEO Mike Flewitt says these cars epitomize the inventive spirit of McLaren. He says they are “the true spiritual forerunners of today’s McLarens – super-light, mid-engined cars with the highest levels of performance and dynamic excellence”. Flewitt promises the 21st century Elva to be “a uniquely modern car that delivers the ultimate connection between driver, car and the elements and with that new heights of driving pleasure on road or track”.

Extreme performance is promised from the Elva: the 815ps, twin turbocharged V8 will speed to 62mph in less than three seconds, while the car aims to be even quicker than the Senna, speeding from zero to 124mph in just 6.7 seconds.

Design at McLaren always supports performance. It also visually expresses these hyper advanced products. The Elva is therefore suitably dramatic to look at with its low nose and pronounced front fender peaks, which also help to enhance forward vision. Large, carbon rear fenders flow from the front of the door to the back deck, while the height of the twin rear buttresses is minimized by using a deployable roll-over protection system.

There is no roof on the Elva. And although you have an option to order a fixed windscreen (needed in some US states), drop-top purists – and the brave – can simply put on a helmet and let the wraparound cabin cocoon them. To achieve this through design, the upper carbon doors curve over and flow down into the cabin, with the light, stiff and strong composite material providing the opportunity to create these complex sculptural forms.

The seats too are designed specifically for this car, with a new lightweight carbon shell that supports the head, shoulder and back. It visually blends into the upper shape of the cabin too. For extra grip, durability and moisture resistance, Ultrafabric is offered as a suitable alternative to the traditional leather interior upholstery.

Design director Rob Melville says providing an elemental driving experience is key to this car. “Formula 1-inspired shrink-wrapped volumes create a technical sculpture that is as striking,” he explains. The exterior flows into the interior to achieve what he says is an example of “a new and unique McLaren ‘blurred boundaries’ design principle, allowing us to seamlessly bring the outside in, to further enhance driver engagement while remaining true to our philosophy of making no compromises.”

Aerodynamics governs McLaren design. With the Elva the company is introducing what it calls the “Active Air Management System”. What the system does is to channels air through the nose of the car to come out of the front clamshell rapidly ahead of the occupants before being directed up over the cockpit to create what McLaren says is a “relative bubble of calm”.

There is a large central inlet above the splitter, a front clamshell outlet vent and a discreet carbon deflector that raises and lowers vertically. When the AAMS is active, the deflector is deployed at the leading edge of the bonnet outlet, rising a few millimeters into the freestream to create a low-pressure zone at the vent. The air is then directed through a 130-degree radius, using a network of carbon vanes across the bonnet that distribute the airflow in front of, as well as along the side of the cabin. The aero system becomes inactive at lower speeds and in cities, automatically deploying when the Elva hits open roads. When inactive, the central duct is sealed, diverting air flow into the low-temperature radiators and increasing their cooling efficiency.

The Elva is the fifth car out of the 18 new models or derivatives announced as part of the company business plan – following on from the Speedtail, 720S Spider, 600LT Spider and the hyper-exotic McLaren GT. ­­­­­­­­­­­­­­­­­­­­­­­­Customer deliveries of the Elva are scheduled to begin towards the end of 2020.

“We are delighted to have gained the rights to the Elva name for an extraordinary new roadster that adds a new dimension to the McLaren Ultimate Series while tracing its lineage back to the sportscars that laid the foundations for McLaren’s success,” says Flewitt. “The McLaren-Elva M1A [MkI] and its immediate successors not only set standards on the track but also established the pioneering design and engineering principles that remain at the heart of our brand.”