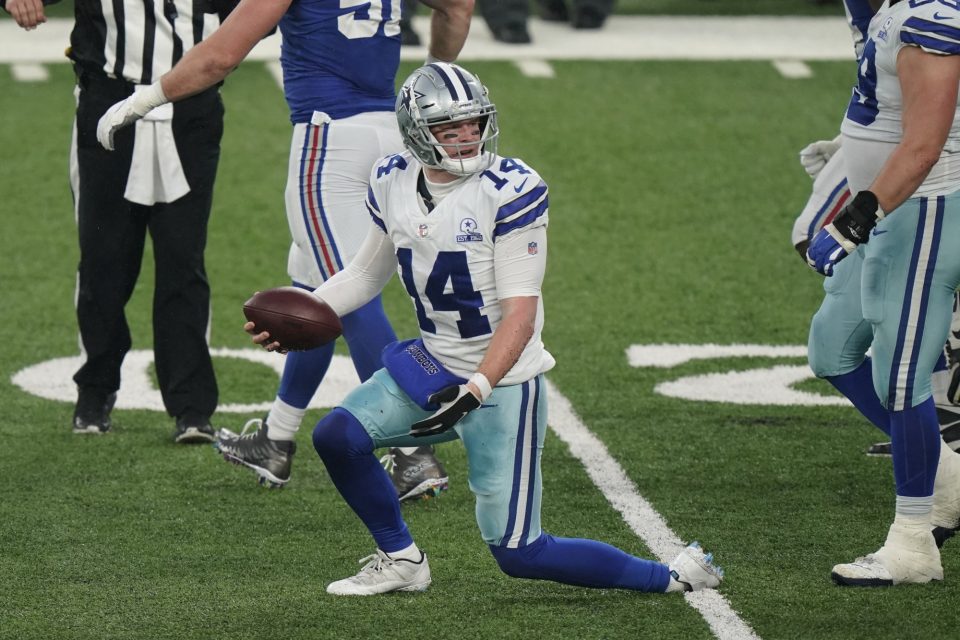 Mike McCarthy will take lingering questions about game management into the offseason rather than the momentum of a four-game winning streak to finish a difficult first season as coach of the Dallas Cowboys.

McCarthy didn’t challenge a catch that set up a 50-yard field goal by New York’s Graham Gano when it appeared the ground aided Dante Pettis’ 10-yard grab in the Giants’ 23-19 victory Sunday. Dallas (6-10) was eliminated from the playoffs with the loss.

A reversal would have forced New York to punt, and the Cowboys could have gone ahead with a field goal in the final two minutes. Instead, Dallas was down four points when Andy Dalton forced a throw into the end zone on third-and-goal from the 17 after a sack. The Giants (6-10) ran out the clock after Xavier McKinney’s interception.

“We just felt it was too close,” McCarthy said. “We felt it was kind of a bang-bang-type situation. We were in a tight game. And the three timeouts was obviously of high value there. We just didn’t think it was enough information to overturn it.”

McCarthy, who made some questionable decisions when the Cowboys were in the midst of six losses in seven games after quarterback Dak Prescott’s season-ending ankle injury, chose not to go for a 2-point conversion trailing by five after Ezekiel Elliott’s 1-yard touchdown plunge with 8:39 left in the third quarter.

“It was too early in the game to go for 2 in my opinion there,” said McCarthy, who settled for a 20-16 deficit that was cut to a point early in the fourth quarter on a 36-yard field goal from Greg Zuerlein, who made four to tie the club season record of 34.

The Cowboys might have had a chance do more than take a four-game winning streak into the offseason. They would have won the NFC East and hosted a playoff game if Washington lost to Philadelphia later Sunday. Instead, the Giants waited to see if they would get in with a Washington loss. Washington would advance with a victory.

“We’re upset that we didn’t do what we needed to to put ourselves in a situation to get in,” said Ezekiel Elliott, who fell short of 1,000 yards rushing when playing at least 15 games for the first time in his five-year career. “Just disappointing.”

One of the NFL’s worst teams at converting touchdowns inside the 20-yard line had trouble again. Dallas had to settle for Zuerlein’s first field goal after recovering a fumble at the New York 27 and quickly getting a first down at the 16.

On the final possession, the Cowboys had a first down at the New York 7 when Leonard Williams was unblocked and dropped Dalton for a 10-yard loss. Rookie receiver CeeDee Lamb had a drop that kept Dallas from a more manageable situation on third or fourth down.

“Things like that have changed the outcome of the game,” said Dalton, who stayed in the game after his left (non-throwing) hand was stepped on at the end of a scramble, an injury that required stitches after the game. “We have to be better in the red zone, and we weren’t today.”

McCarthy believes a four-game winning streak to finish a rough season in Green Bay when he was a rookie head coach in 2006 helped catapult the Packers to the NFC championship the next year.

These injury-plagued and sometimes mistake-prone Cowboys rallied with three straight victories after falling to 3-9, but couldn’t match McCarthy’s first team.

“The facts are what they are,” McCarthy said. “We finished 6-10 and we’ll take the step back and go through a thorough evaluation of everything in our football operations. I like the look of our guys. I think just the way they worked, continued to fight all the way through to the end. We have a lot of guys coming back from injury situations.”

Copyright © 2021 The Associated Press. All rights reserved. This material may not be published, broadcast, written or redistributed.