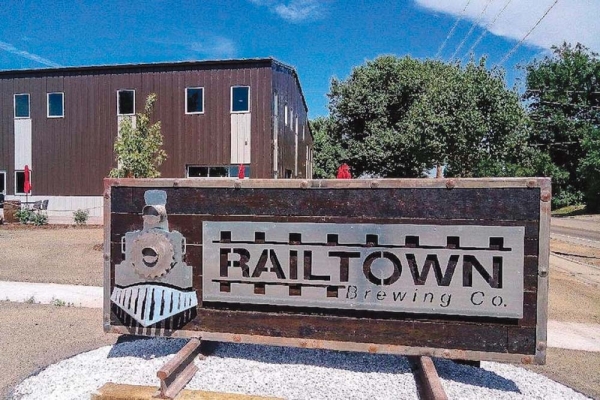 The COVID-19 pandemic has not doused Justin Buiter’s optimism in his future plans for his brewery. However, when Buiter looks ahead, he said 2021 will likely be spent regaining the footing his company lost during a gauntlet of a year.

“I think it will be a year of recovery and getting back on our feet and figuring out what a new normal looks like,” said Buiter, who is co-owner of Dutton-based Railtown Brewing Co. The brewery has been open for six years but has only operated for two as a full-scale restaurant at its location at 3595 68th St SE.

“From there, we can start looking at 2022 and deciding on some big events we want to move forward with and if we want to start dipping our toes in more distribution. I think it will be a year of seeing how things pan out and letting the dust settle.”

Railtown, and craft beer producers around the state, have certainly earned a breather as they continue to slog through the pandemic and its various phases of shutdowns for bars and restaurants.

Unsurprisingly, the pandemic is top of mind for Michigan brewery owners, who move their roughly billion dollar industry into the new year. But brewery owners face the added stress of supply chain issues and shortages, and late last year dealt with uncertainty over potentially higher tax bills and limited financial relief from the state and Congress.

The fate of many craft breweries hinges on where the pandemic goes in the coming year. The trade group Brewers Association administered a survey to its members that showed more than 80 percent were very confident their doors would still be open come 2021. But when asked if they would still be in business a year from now, that confidence dropped to around 54 percent.

To further underscore the uncertainty, one in five craft brewery owners doesn’t think they’ll still be operating by the end of 2021.

Buiter called himself cautiously optimistic when it comes to the future and said he is comfortable with his company’s capital.

“We’re confident we’ll get (back to normal) by the spring,” Buiter said. “And honestly we feel like there is a lot of opportunity sitting out there. There is going to be consolidation in a lot of industries and I think folks that are able to see their way through this crisis are probably going to do well for themselves. I think consumers are going to be very eager to get out and spend and get back to life as normal.”

Buiter maintains his optimism even when his brewery — which mostly sells its beer in-house — is one of the most vulnerable.

While manufacturing breweries — like longtime West Michigan heavyweight Founders Brewing Co. — are able to continue generating revenue through extensive distribution, breweries like Railtown are put at a near standstill when in-house dining is restricted, which totaled nearly 180 days in 2020.

“Put them in the bucket with restaurants and bars,” Founders co-founder and CEO Mike Stevens said of retail-oriented breweries. “The bottom line is you don’t create a retail establishment to operate either closed or at 50 percent capacity. … I feel for these brewers that have just been hanging on since last March, coming up to a year almost. It’s been brutal.”

While Stevens might not envy the struggles of non-distributing breweries, and faces similar challenges with taprooms in Detroit and Grand Rapids, he must contend with various supply chain woes that grew during the pandemic.

For starters, an aluminum can shortage is starting to tighten around the necks of many breweries with significant distribution. Last month, Founders COO Brad Stevenson acknowledged the shortage, telling MiBiz that the brewery has not been able to procure the amount of cans it needs.

This problem could potentially carry over into other essentials of the business, from CO2 to cardboard packaging.

Stevens attributed shortages to a combination of increased demand and manufacturers that were hampered by the inefficiencies of COVID and therefore couldn’t always operate at full capacity.

While certainly a disruption, these supply chain problems should dissipate fairly quickly as COVID subsides.

“The (aluminum) can situation is just a constraint based on the manufacturer being a little caught off guard,” Stevens said. “What happened when COVID hit was all those drinkers — say 30 percent of the U.S. population — used to go to bars and drink draft beer. Well that dried up and shifted liquid into the grocery store channels and pushed a lot more demand in cans.”

“The manufacturers weren’t expecting that 30 percent of the American public would all of a sudden want to buy cans,” he added.

When speaking with MiBiz before Christmas, Short’s Brewing Co. CEO Scott Newman-Bale was somewhat anxiously monitoring the progress of two important tax issues that would save craft beverage producers from a mammoth and unexpected tax bill.

Cideries, meaderies, wineries, breweries and distilleries nationwide were lobbying for Congress to pass the Craft Beverage Modernization and Tax Reform Act (CBMTRA), which would make the currently reduced federal excise tax rate permanent. These slashed rates were adopted on a two-year basis in 2017, renewed for a year in 2019, and set to expire at the end of 2020.

Congress passed CBMTRA with its omnibus spending and COVID-19 relief package before President Donald Trump threatened to veto the bill.

“I wasn’t deathly concerned but it was one of those things with legislation that when you start to change things it can quickly derail,” Newman-Bale said of the last-minute tax changes. “I was worried maybe they would have to procedurally reintroduce and change the bill and whenever you do that, there is always the chance something may change. I was concerned but still relatively confident.”

The other important issue was allowing Paycheck Protection Program loan recipients to deduct payroll costs and other expenses covered by the loan. This tax benefit — worth hundreds of billions of dollars for business owners of all industries — was also signed into law.