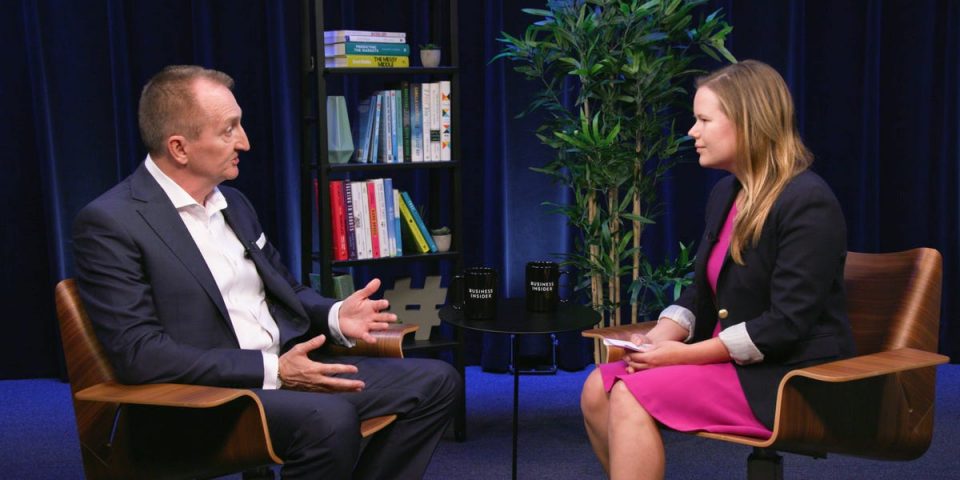 Mars’ CEO believes the global supply chain is “broken” — and that it is companies’ responsibility to fix it.

“In total, we’re taking more out of the planet than is sustainable. And we have to fix that,” Mars CEO Grant Reid recently told Business Insider.

In 2017, Mars committed $1 billion to its “Sustainability in a Generation” plan, which attempts to tackle climate change by reducing the carbon footprint of its business and supply chain by more than 60% by 2050. The company has also aligned itself with other businesses on the issue, including the Business for Inclusive Growth coalition sponsored by French President Emmanuel Macron.

“I’m an eternal optimist … I believe that people will respond,” Reid said. “At first they’ll deny, then they’ll be angry, but then they’ll actually help drive the change, and I can see quite a bit of that change coming.”

Kate Taylor: Sustainability has been a huge topic, and Mars has made some big promises on sustainability. How was being a private company able to empower you to make these big commitments when it comes to sustainability?

Grant F. Reid: Yeah, it’s a great question. And, you know, I would say it was fundamental because, you know, we have family ownership, we have family members who are passionate in this space. In fact, in 1947, so before this was even fashionable, one of our owners wrote a letter to everyone in the company, and it actually said that our role is much bigger than just making profit. It’s about, how do you deal with all your stakeholders, all the way through the value chain. So it’s in our DNA, it’s something we’re very proud of, it’s something we’ve always done, but it’s been relatively low-key.

You know, for the first 100 years, we let our brands do the talking. Everybody knew M&M’s, everybody knew Pedigree, everybody knew Twix, everybody knew Uncle Ben’s, but not so much about, I think, the DNA of the company itself, and things have changed now in building that reputation, so we’ve said, we’ve put a billion dollars into Sustainable in a Generation, and we’re fully committed, the family’s behind it, and we didn’t have to convince, you know, financial analysts it was a good idea. We just had the trust and the support of our family, and it allowed us to make those generational, generational decisions.

Taylor: Do you think that other companies could be doing more on this topic?

Reid: We could all be doing more, honestly, ourselves included, but there are some, there’s a lot of really good work out there, and we’re not doing it all ourselves, you know, we’re doing a lot ourselves, but we’re also trying to build a coalition for change. You know, trying to create an entity that’s bigger than any one company, and we’re doing that in conjunction with companies, and we’re doing it in conjunction with NGOs and governments to really create that catalyst for change, which will benefit everyone.

Taylor: Gen Z, obviously, sustainability is a huge issue for them. How does that connect to what Mars is focusing on when it comes to sustainability?

Reid: Gen Z’s looking for a number of things, and, you know, first of all, to attract them to your brands, to attract them to your company and to get them to stay, you’ve got to have a higher-order purpose, you know? And that’s where “the world we want tomorrow starts with how we do business today,” I think, is such a great calling. And then you superimpose the individual areas, like, “creating a better world for pets,” or “better food today for a better world tomorrow,” from the different segments, that’s a big attraction.

Then, I think the brands themselves, you know, are really very powerful for Gen Z. But what we’ve been trying to do is, and, the data’s pretty clear, it says, Gen Z’s looking for more transparency, they’re looking to see what is it you’re doing with your brands and your company that’s really good for the environment, and how can I be part of that?

Taylor: What do you think is a long-term trend that not enough people are talking about? What should people be looking at more?

Reid: I’d love for people to talk, be talking more about sustainability. Even though it has increased dramatically, I think we still have so much work to do, you know, whether it’s plastics in the ocean or whether it’s greenhouse gas emissions or forced labor in the supply chain. I’d like consumers to be talking about it more, making their positions on purchases tied to that, because I think that will really help create a more forward momentum to solve some of those issues.

I mean, right now, the global supply chain is broken. We’re taking more — not Mars, but in total — we’re taking more out of the planet than is sustainable. And we have to fix that. And to do that is going to take a coalition of the willing to provide that leadership to bring a momentum behind it, to mobilize NGOs, mobilize companies, to mobilize people, and to mobilize countries to solve those issues.

Taylor: The idea of a broken supply chain is both very depressing but also kind of really sums up the issue in a very vivid way. What happens if we don’t fix this kind of broken system we have right now?

Reid: Yeah, so I’m not trying to depress you, I’m just trying to motivate you, which is to say, you know, we need to take action. And I think, cutting to the chase, any time you’re using more resources than is sustainable is broken, by definition. And so I think that’s the opportunity, so I look at those things with an optimist’s view. I guess I’m an eternal optimist, which is, I believe that, you know, human evolution, I believe that people will respond, you know, at first they’ll deny, then they’ll be angry, but then they’ll actually help drive the change, and I can see quite a bit of that change coming.

There’s some, you know, companies that are doing some great things, I mean, we’ve got this Business for Inclusive Growth that President Macron and Danone are leading in France. I think more of those initiatives, through the UN and other vehicles, will prime the pump and will get it done.

Taylor: Definitely. And if companies that maybe haven’t taken action yet are looking for a way to take action or are weighing the cost of taking action versus not taking action, what message would you give to those leaders?

Reid: I would say join groups that are going through a like-minded experience, you know, things like the Consumer Goods Forum is a great place to join because that’s retailers and manufacturers working together to wrestle with some of these issues. I would say talk to companies who are on that journey, where, you know, we are on that journey, we haven’t solved it ourselves, so we are open to dialogue and open to input and different approaches.

And take a long-term view. You know, if you take a one- or two-year view, then you probably won’t do anything. If you take a generational view and take a more holistic view, I mean, we have what we call the Economics of Mutuality, which talks not only about financial capital but human, social, environmental capital. If you take a more holistic view of the issue you’re trying to solve, you’ll probably be a lot more successful.

CRISIS? WHAT CRISIS?, The Colab Factory