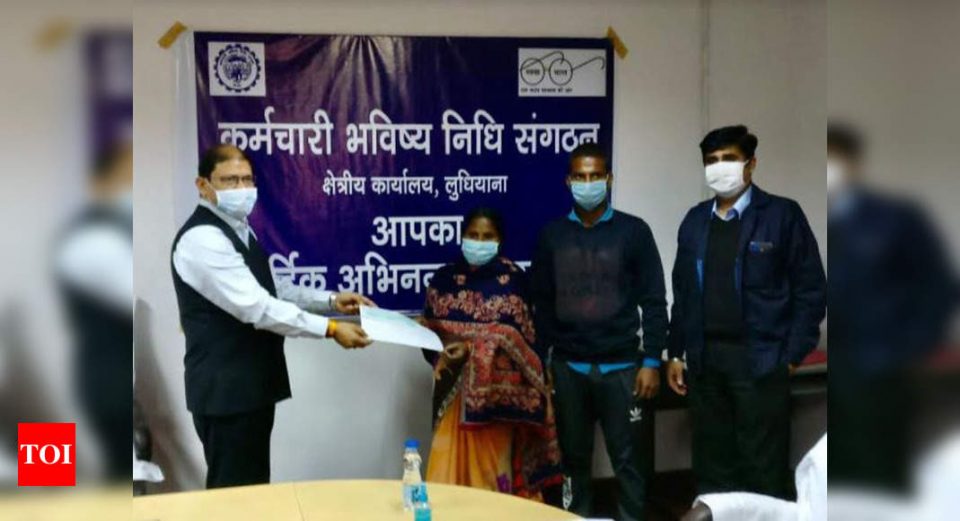 LUDHIANA: Employees Provident Fund Organization (EPFO), regional office, Ludhiana has taken cognizance of the death of a factory worker, Shiv Kumar in an accident. The department extended benefits like pension, employees provident fund (EPF) and The Employees’ Deposit Linked Insurance Scheme(EDLI) to the widow and family members of deceased worker, who were unaware about what benefits they are entitled to get.
Under new initiative, the EPFO office has created a special Death Claim Cell which scrutinizes newspapers and other information sources on daily basis for information about any accident, mishaps in the industry. The cell then proactively takes up incident of mishap and verifies if any eligible subscribers has expired in such mishap and to help legal heirs to claim their social welfare dues such as EPF , EPS(pension) and EDLI.
Giving more information , Dheeraj Gupta, regional provident fund commissioner -1 said, “After taking cognizance of the incident, our death claim cell gathered preliminary information about the deceased worker and the company details. It was enquired whether the establishment in which worker was working was covered under EPFO or not, whether the deceased worker was made EPF member by establishment. Whether the worker was eligible for EPF membership or not. After getting preliminary information enforcement officer was immediately deputed to get the further details from establishment and guide the widow about the EPF benefits and complete the necessary paper work by hand holding the family. Our Officer met the widow and son of deceases and helped them file claim in EPF Office in coordination with the Establishment. Death Claim Cell was directed to hand hold the family and extend all the due legal benefits such as Pension, PF, EPF, EDLIbenefits to the aggrieved family at the earliest”
Gupta also added, “Apart from PF Benefits, Widow and family Members of deceased worker are entitled to Pension and EDLI benefits irrespective of worker, EPF Member`s length of service, if due to any unfortunate incidence, accident EPF Member loses their life while in service. An amount of Rs 2,08,937 has been settled as EDLI and Rs 44,114 as EPF accumulation in favour to Sunita Devi widow of Late Shiv Kumar. Some paper work including opening bank accounts of children is pending at the level of family members in Bihar , once its completed, the widow pension for Rs.2326 and Children Pension for Rs. 582 will be released immediately from this office”
Other senior officials of the department including Regional Provident Fund Commissioner-2, Sumeet Singh too were present on this occasion.
previous post

Bullying ministers have no place in government | Letters | Politics

It may be possible to upcycle plastics into liquid fuel – but is it worth it? | Education