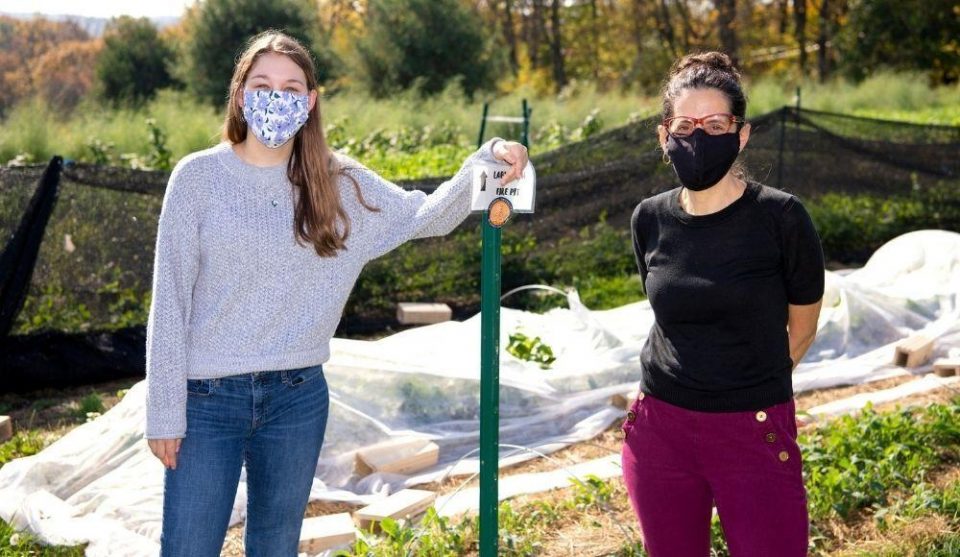 Lewisburg, Pa. – One look around the farm fields of central Pennsylvania will show you that modern agriculture uses large amounts of plastics to grow crops. Most of the time, there’s no environmentally-friendly way to dispose of all that plastic. It’s been burned, buried, and sent off to the local landfills, making it a source of soil, water, and air pollution.

Bucknell University Professor Deborah Sills, civil & environmental engineering and her student Riley Doyle ’22, an environmental engineering major, are teaming up with researchers from Cornell University and two institutions in Israel (the Institute of Soil, Water and Environmental Sciences, Volcani Center; and Technion) to try to change that. The researchers received a $300,000 grant from the U.S.-Israel Binational Agricultural Research and Development (BARD) Fund to design a method to turn agricultural plastics into useful liquid fuel.

“In Israel and places around the U.S., including central Pennsylvania, agricultural plastic is used to help improve crop yield and water efficiency, but the waste management of that plastic is very poor,” Sills says. “Some people are burning it and it’s super toxic.”

The researchers from Cornell and Israel will use thermochemical conversion techniques to up-cycle agricultural plastics into crude oil. Sills and Doyle will do environmental and material modeling to determine whether it’s worth piloting the process on a larger scale.

Sills says they’ll begin their work over the winter break by conducting a life-cycle assessment — an environmental assessment, modeling across the life cycle of the product.

“We’re going to use a life-cycle assessment to help in the carbon footprint analysis of the product,” she says. “We also will conduct a technoeconomic analysis, which will be a model that considers at what minimum price we could sell the plastic crude oil over a 30-year period to have an [economic] impact. So we’ll look at the minimum price of this plastic crude, which may contain valuable polymers, and whether we can get more valuable chemicals out of it.”

Ultimately, the Bucknell researchers hope to determine the environmental benefits of removing the waste plastic from the ecosystem. First, they need to find out how much plastic is being used in agriculture. According to Sills, Jean Jones, executive director of the Southern Waste Information eXchange, estimated that total U.S. agricultural plastic waste is approximately 800 million pounds per year. Sills has identified some resources that will enable them to pull data to get an updated measurement.

Doyle, who was awarded a fellowship last summer through Bucknell’s Clare Boothe Luce Research Scholars program, will conduct much of that analysis. Even though they’ve just started meeting on the project, Doyle has already found it to be an eye-opening experience.

“I didn’t really think about it [agricultural plastic waste] before I learned about it through this project,” she says. “Now I know that there’s all this waste around me. It helped me realize how much there actually is.”

Doyle ultimately chose to attend Bucknell because of opportunities to work closely with faculty on research projects like this. Those experiences should prove beneficial in her post-graduation plans.

“I came to Bucknell to have that one-on-one type of interaction with professors. I am thinking about going to graduate school and this will help me decide what I like and what I don’t like [in research],” Doyle says. “We are working on this research with other scholars in the U.S. and other countries and that provides me a larger perspective on what I’m doing.”

What they’ll be doing over the next three years (the project runs through August, 2023) is striving to strike a material and environmental modeling balance.

“We’ll create models for the energy usage and materials that go in and out of the project,” Sills says. “We’ll consider all the flows linked to the costs and environmental impacts. We’ll consider the environmental impacts of finding a better way, even if it’s cost neutral, so it allows better waste management than having plastics dumped or burned.”