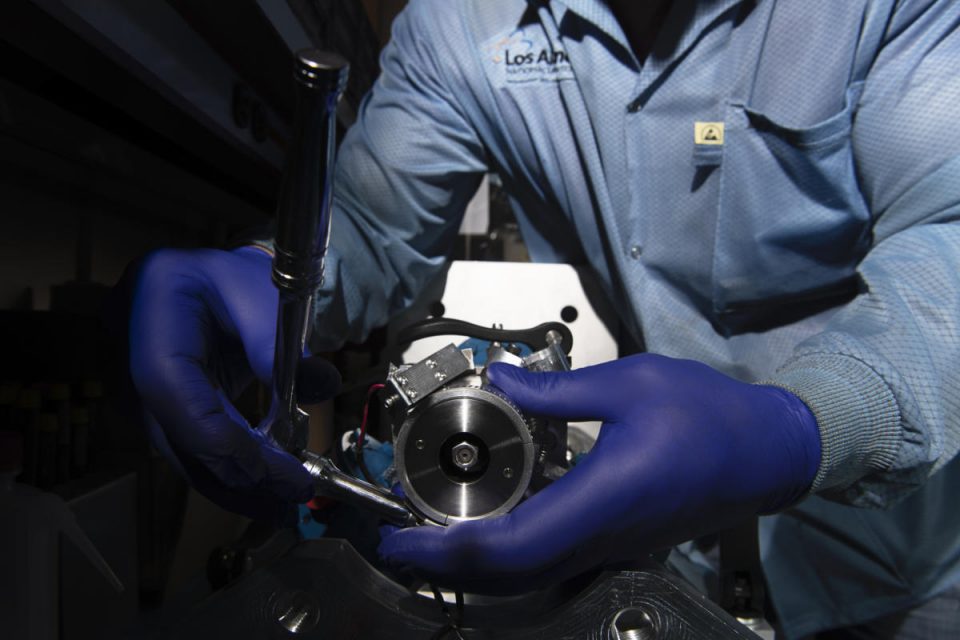 The OrganiCam and Multi-Burn Solid Rocket were among eight R&D 100 winners presented by R&D World magazine that were based at LANL.

The Multi-Burn Solid Rocket can be used to dodge traffic in what are becoming increasingly congested orbital zones of the Earth.

In a video supporting the entry, LANL engineer Nicholas Dallmann explains that “space junk” orbiting the Earth is becoming more of a problem. There are tens of thousands of objects circling the globe in what’s called low-Earth orbit and millions of objects too small to track. All of them present a risk to orbiting communication satellites. A collision between a satellite and debris could create a new debris cloud, and that cascade could damage the satellite and potentially take it out of service.

Dallmann explained that solid rockets typically get just one burn or one thrust, and that’s it. His team has been working on a solid rocket that provides multiple independent burns, using a single solid rocket grain.

“With a solid rocket that you can store on board a satellite in a safe configuration for potentially decades and with the solid rocket’s ability to provide a large amount of thrust instantaneously, one can avoid potential collisions on orbit,” Dallmann says in the video.

His team wanted to limit the use of hazardous material, so they found a way to ignite the thrust using water.

This is done through electrolysis, which separates water into its elements, hydrogen and oxygen. The hydrogen and oxygen gas can then be burst into a chamber where a spark ignites the gas and the flame ignites the fuel, generating a thrust. In this way, satellites can avoid collisions that might otherwise put it out of commission.

“Low-Earth orbit is a natural resource, one that we need to protect for future generations, and we’re hoping that our solid rocket system will provide another tool in the toolbox for protecting that natural resource,” Dallmann says.

Roger Weins is a planetary scientist at LANL. He and Patrick Gasda headed a LANL team developing the OrganiCam in conjunction with the University of Hawai’i.

“OrganiCam is a revolutionary compact instrument that could be used to detect organic materials here on Earth or to discover them on other planets,” he said in a video describing the project.

Habitable environments may be found underground or under icy crusts on Mars.

“We have to have instruments that are rugged, can withstand huge doses of radiation in some cases, and are compact,” he said. “This instrument uses a fluorescence image to help us identify organics in unusual places.”

In the same video, Gasda explained how it works.

“Organic samples emit fluorescence at very fast timescales,” he said. “OrganiCam uses a pulsed laser and a camera that can open for 100 nanoseconds to pick up just the organic fluorescence.”

That allows scientists to discriminate between organic and mineral fluorescence, making the instrument unlike any other, he said.

The OrganiCam is designed to scan for biological samples on Mars, but could have applications here on Earth, too. (Courtesy of Los Alamos National Laboratory)

The OrganiCam follows the LANL-developed ChemCam, which is currently in use by the Curiosity Rover on Mars.

“The next generation is called SuperCam, and that’s due to launch on the Perseverance Rover,” said Benigno Sandoval, a LANL engineer, adding that ChemCam performs elemental breakdown of rocks and soil on Mars, while SuperCam will look at mineralogy and the molecular composition. “OraniCam will gather a lot of the same information, but it will also have an imaging mode in which it will highlight biological samples.”

The OrganiCam has two modes – one to scan for molecular composition and the other to detect organic material.

Biological samples would most likely be found in lava tube caves that have spaces protected from the harsh environment on the surface. The mission concept is to use a type of helicopter to descend into a cave. The OrganiCam could ride along and scan for organic material.

The OrganiCam would also be used on Earth, Sandoval said.

“In any near-sterile environment that you’re trying to have early, efficient and effective identification of biological samples, OrganiCam would deliver that capability,” he said.

Other inventions out of LANL that earned R&D 100 Awards were:

“Congratulations to the brilliant teams behind Los Alamos National Laboratory’s 8 R&D 100 awards,” LANL Director Thom Mason said in a news release. “These awards reflect the great work that our Laboratory does that can both benefit humanity and advance the frontiers of science.”

Data | Even in States with limited procurement, farmers wanted MSP programme to continue

The Weak Link in Your Value Chain: Disengaged Suppliers

Warehouse automation to be 6% larger than forecasted