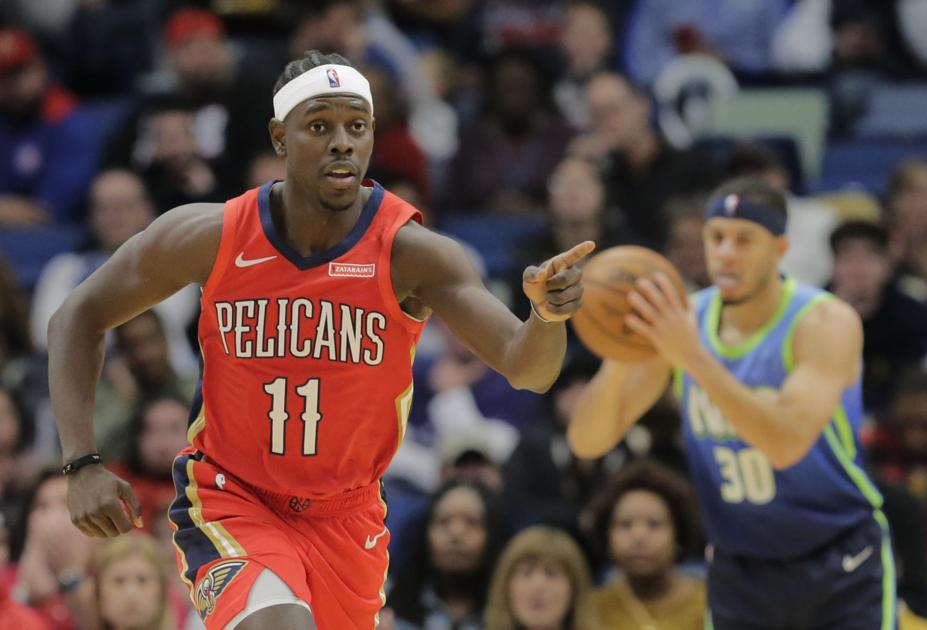 In a virtual question-and-answer session with fans earlier this month, David Griffin dropped breadcrumbs about the blockbuster deal to come.

Toward the end of the half hour, play-by-play announcer Joel Meyers asked Griffin about the possibility of trading Jrue Holiday. Griffin gave a 199-word answer. The key phrase in his explanation came halfway through, when he said two words: “sustainable future.”

“We’re trying to build a team that is highly competitive today and build toward a sustainable future,” Griffin said.

It was not the first time Griffin used that phrase during the offseason. Over the past weeks, Griffin has hinted that while he wants the Pelicans to be competitive in the present, he has an eye trained toward the future, where he thinks they can be contenders if they play their cards right.

On Monday, Griffin OK’d a deal to send star guard Jrue Holiday to the Milwaukee Bucks in exchange for Eric Bledsoe, George Hill, three first-round picks and two pick swaps, according to ESPN. The picks include the No. 24 pick in Wednesday’s draft, according to David Aldridge of The Athletic, giving the Pelicans two picks in the first round for the second straight year.

It was the second time in a year and a half on the job that Griffin sent away a star player for a gargantuan return. The Pelicans now own the rights to five first-round picks from other teams in addition to all of their own. That war chest gives them many pathways to construct a long-term winner around their two young stars, 20-year-old Zion Williamson and 23-year-old Brandon Ingram.

New Orleans plays in in the NBA’s second-smallest media market. Historically, it has never been able to attract blue-chip free agents. Perhaps that changes if Williamson continues to improve, but there’s no guarantee. Even if the Pelicans aren’t able to get meetings with top players, they now have the draft capital to trade for the next disgruntled star, move up in any draft they want or just keep their picks and take swings.

Holiday and his former pick-and-roll partner Anthony Davis spent six seasons together in New Orleans. They made the playoffs twice and advanced past the first round once in 2018. Their first-round sweep of the Portland Trail Blazers was the highlight of that era. The following season, Davis demanded a trade, which upended everything.

The Davis-Holiday duo is not blameless in the Pelicans failing to make the playoffs in four out of six seasons. But New Orleans’ primary issues were never-ending injuries, in part because of a poor medical staff, and a lack of capable complementary pieces.

Last season, there was a logjam in the Pelicans’ backcourt.

Trading Davis and Holiday should give Griffin, general manager Trajan Langdon and the rest of New Orleans’ brain trust the ammunition to keep stockpiling young talent well into the next decade.

The Pelicans have the 13th and, thanks to Milwaukee, the 24th pick in Wednesday’s draft. They’ll also likely have the rights to the Lakers’ unprotected first in 2022, the chance to swap firsts with Los Angeles in 2023, and the Lakers’ unprotected first in either 2024 or 2025. When the Pelicans get the other two first-rounders from the Bucks is still unclear.

Next season, New Orleans could still challenge for a playoff spot. Bledsoe has had his postseason struggles, but he’s a proven regular-season player. Last year, he averaged 14.9 points, 4.6 rebounds and 5.4 assists for a Bucks team that might’ve won 70 games if not for the pandemic. He is a capable 3-point shooter and strong defender.

The Pelicans could trot out a starting lineup featuring Lonzo Ball, Bledsoe, Ingram, Williamson and a center they acquire in the draft or free agency. Off the bench, they’ll have Hill, JJ Redick, Josh Hart and Nicolo Melli.

Brace yourselves for a torrent of NBA activity starting next week.

At the very least, that rotation could be in the hunt for the play-in tournament. Remember: next season, the teams that finish in seventh, eighth, ninth and 10th in each conference will duke it in a play-in tournament to determine who gets the final two playoff spots.

The massive haul for Holiday could allow the Pelicans to thread the needle between being entertaining today and making deep playoff runs in the future. That was the goal this offseason, Griffin said earlier this month. Monday’s move makes both of those scenarios a possibility.

Idaho developing plan to distribute COVID-19 vaccine to the public

EV Car Battery Giant CATL to Invest $5.1b for a Factory in Indonesia