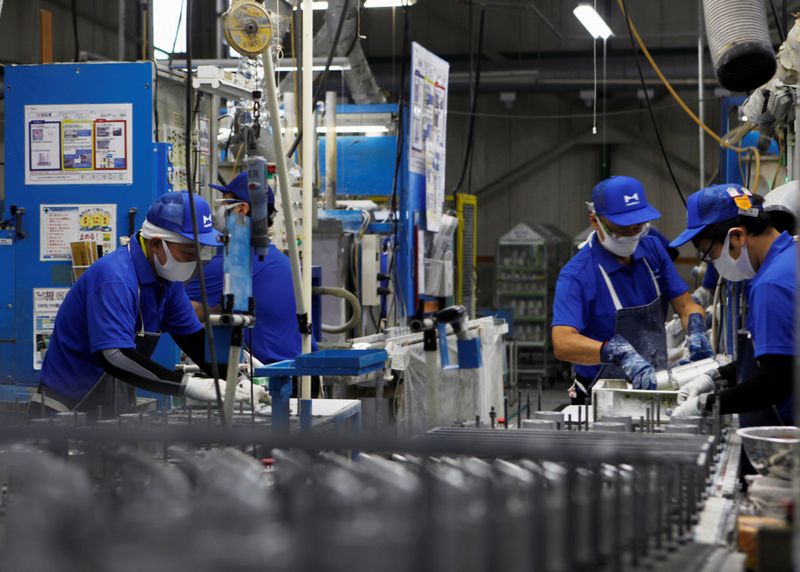 TOKYO (Reuters) – Japan’s manufacturers remained pessimistic for the 14th straight month in September, and though the gloom eased somewhat the broad results of the Reuters Tankan survey pointed to a painfully slow recovery for the coronavirus-stricken economy.

The result underlines the huge challenge the country’s next leader succeeding Prime Minister Shinzo Abe will face to boost growth and corporate and consumer sentiment after the economy sunk into its deepest recession on record.

“Sales for cars as well as construction machinery are not recovering,” a manager of a transportation equipment maker wrote in the Reuters poll of 485 large- and mid-sized companies, in which 256 firms replied on condition of anonymity.

The Reuters Tankan sentiment index for manufacturers inched up to minus 29 in September from minus 33 in the previous month, still deeply pessimistic even though it marked the least gloomiest level in six months.

The materials industries such as steel, nonferrous metals, textiles and paper put a drag on the overall sentiment index.

The service-sector index stood at minus 18, up from minus 23 in August, but sentiment among wholesalers, transport and utilities weighed on broad business confidence.

The Reuters Tankan index readings are calculated by subtracting the percentage of respondents who say conditions are poor from those who say they are good. A negative reading means that pessimists outnumber optimists.

The BOJ will hold its next policy review on Sept. 16-17, and release its next “tankan” survey results on Oct. 1.

The central bank was expected to offer a brighter view next week on the economy, output and exports than in July to signal that they were starting to recover from the COVID-19 crisis, sources familiar with its thinking said.

A manager at a machinery maker in the Reuters Tankan survey said that a sharp drop in demand from weak corporate activity due to virus-induced lockdown measures appeared to have bottomed out. “A recovery will take time,” the manager said.

Manufacturers’ sentiment was seen recovering further to minus 19 in December, while that of service-sector firms was expected to tick up to minus 17.

“Our corporate performance is improving but it’s unclear how long it will hold up,” said another manager, at a rubber company said.