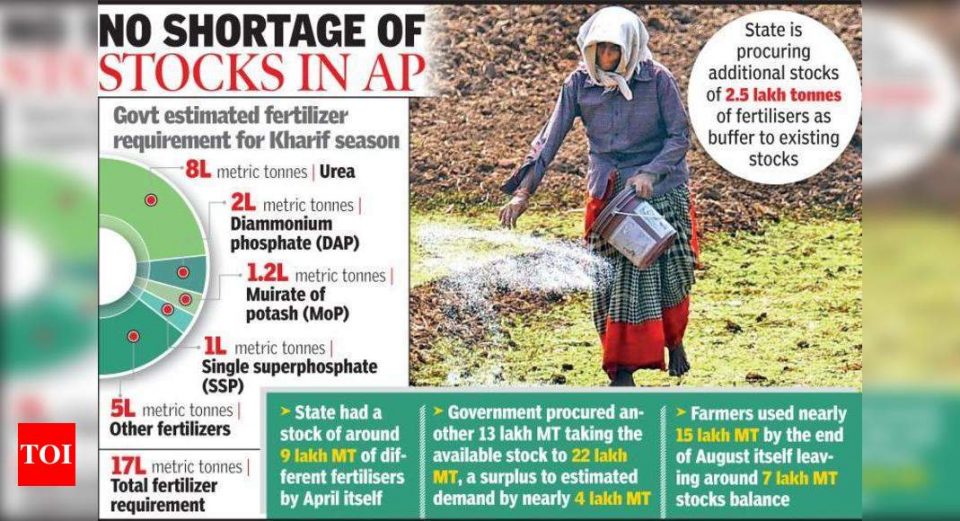 Amaravati: Agriculture scientists and officials are worried about the excessive use of fertilisers by farmers in the state as it is likely to induce pests and crop damages. The farmers are on an overdrive in using fertilisers as massive stocks were consumed within three months of the commencement of Kharif operations in the state.
Although a favourable monsoon with continuous rains and reservoirs reaching full capacity has helped farmers go for cultivation to the fullest extent, unusual quantities of fertilizer use is creating ripples among agriculture experts.
The farmers have already used nearly 15 lakh metric tonnes of fertilisers against the total season’s demand of 17 lakh MT.
“There is no shortage of fertilisers including urea in the state. However, it is not a wise move to use high quantities of stocks as it might boomerang on the production,” said agriculture commissioner H Arun Kumar. He said that farmers should follow the recommendations of the agriculture officials and scientists in usage of fertilisers and desist from high quantities of spraying. He added that excessive use of fertilisers would in fact attract new pests and damage the crop.
The state government had readied stocks of fertilisers including urea, DAP, MOP, SSP and other complex chemicals in tune with requirement for the season. The state government had also anticipated that demand for fertilisers might go up from the previous year and readied plans for procurement from the Centre as well as private firms.
The government had directed the agriculture department to be ready to avoid the last-minute rush for the stocks keeping in view of the previous year’s experience. “The state has received 511.8 mm rainfall against the normal of 44 mm till the first week of September. This is nearly 15 percent excessive rainfall which has put the farmers on over drive,” said a senior official.
Sowing operations were completed in about 32 lakh hectors of agriculture crops and plantations completed in about 17 lakh hectors of horticulture crops which is considered to be very high in the recent past.
previous post

Caution called for over big promises on manufacturing